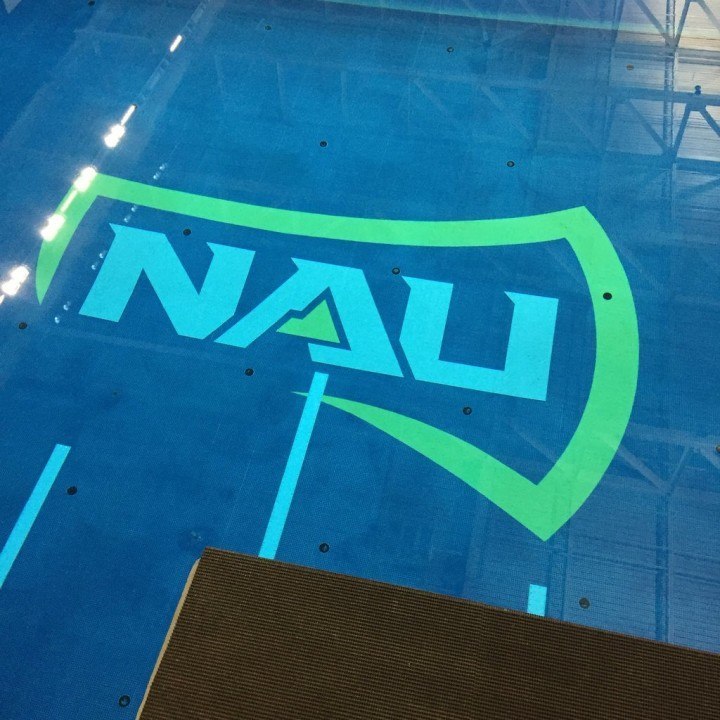 FLAGSTAFF, Ariz. – After nearly two years of construction, Northern Arizona University’s brand new Aquatic and Tennis Complex (ATC) is set to be unveiled to the public this weekend. The state-of-the art facility, located across the street from NAU’s Health and Learning Center, will be the new home of NAU swimming & diving and men’s and women’s tennis.

“The grand opening of the Aquatic and Tennis Complex brings real excitement and pride to the NAU athletics department, the University and the Flagstaff community,” said Vice President for Intercollegiate Athletics Dr. Lisa Campos. “This facility will enhance our NCAA Division I swimming & diving and tennis student-athletes’ experience as they compete at the highest level. These teams will greatly benefit from this spectacular facility. I am thrilled for our student-athletes and coaches who will continue to Inspire Northern Arizona while representing NAU in the highest regard.”

The first athletics event in the new facility will be the NAU men’s tennis home opener versus Western New Mexico at 1 p.m. this Sunday, Feb. 21. The facility will also host the NCAA Zone E Diving Championships from March 7-9.

The ATC includes an Olympic-sized swimming pool as well as a separate diving well. In addition to 1-meter and 3-meter springboards, there is the addition of a 10-meter diving platform. Other features include dryland training areas, a spa and six indoor tennis courts along with viewing areas for spectators.

“The new facility is incredibly nice,” said head swimming & diving coach Andy Johns. “We have a 25-yard course with top-of-the-line starting blocks and plenty of space to train and race in. Our divers now have platforms to be able to practice on a consistent basis and all the amenities of a world-class facility. We are so fortunate to be able to call this beautiful pool our new home.”

The men’s and women’s tennis teams last had the luxury of their own on-campus courts in 2007 with six outdoor courts. The ATC will provide the two programs with an indoor home for daily practice and home matches. Previously at the mercy of Flagstaff’s unpredictable weather, NAU tennis has hosted home matches at Continental Country Club and the Flagstaff Athletic Club as well as in Sedona in recent years while resorting to the two-court Fieldhouse for an on-campus practice facility.

“Ever since they started building this facility, I’ve been smiling ear-to-ear,” said head women’s tennis coach Kim Bruno. “It’s a beautiful facility that will raise the bar for both men’s and women’s tennis in terms of being able to practice more as well as recruiting. It has definitely been exciting watching it all come to fruition.”

“The new facility is incredible and it is a very exciting time for NAU Tennis,” added head men’s tennis coach Ki Kroll. “The team is looking forward to having a place to call home.”

NAU Athletics will share and operate the facility with NAU Campus Recreation. Campus Recreation has planned several events to commemorate the grand opening. All NAU students, faculty and staff are invited to enjoy a Luau Pool Party in the ATC on Saturday, Feb. 20 from 5-7 p.m. The event is free for all with an NAU ID, and will feature stand up paddle boarding, open kayaking, log rolling, battleship and cannon ball contests, inflatable volleyball, music, food and giveaways.

The Aquatic and Tennis Complex grand opening will continue with the official first opening to the public and members of the community on Sunday. Everyone is invited to tour, lap swim and free play and discover scuba diving from 12:30-4:30 p.m. The events on Sunday are free to the public, as is the NAU men’s tennis match versus Western New Mexico.

The tennis side of the ATC will start with a soft opening on Monday, Feb. 22. NAU students will be able to obtain court time in the evenings between 6-10 p.m. daily. Student IDs are required for court access and interested students should contact Campus Recreation to make reservations. Walk-ins will also be allowed based on court availability.

For NAU faculty and staff, there are two options to access the tennis courts by either purchasing a yearly membership or individual hourly court fees. For more information, contact Ki Kroll at 928-523-3412.

Groundbreaking for the ATC was held on May 1, 2014 after the Arizona Board of Regents unanimously approved the proposal on Feb. 7, 2014.

Awesome. Now all Arizona needs is an indoor facility like this down in the either the Valley or Tucson (hint hint Cats and Sun Devils) so we can have a world-class, nearly sea-level, all-season facility.