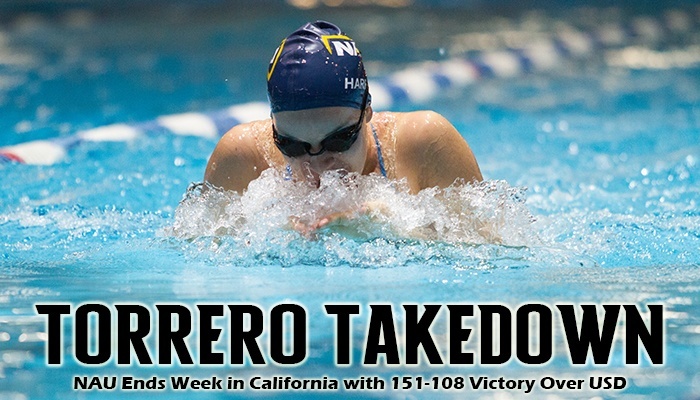 The Northern Arizona Lumberjacks completed their week-long training trip to California on Saturday with a win over the University of San Diego by a 151-108, exhibition-free score.

That’s NAU’s 9th-straight victory in the dual series, though that’s a series that has been on hiatus since the 2009-2010 season.

Though taking a fairly comfortable scoring margin, the event victories were much closer, with NAU winning 8 races and USD winning 6.

“Overall it was a great week,” said head coach Andy Johns. “Between Vegas and here (in San Diego), we got a lot of work done and we’re in good shape heading into next semester and the new year. We had some people win their first collegiate dual meet events like Eva (Pold) and Kimmy (Richter). All around it was a really good week.”

That victory for Pold came in the 200 fly, where a 2:09.05 beat out her teammate Alexis Juergens in 2:09.65. Pold trailed for most of that race, but held on to her speed much better than Juergens over the last 100 yards, and especially the last 50.

For Richter, the victory came in the 500 free with a 5:06.86 that just missed her season best in the event, done a week earlier at the UNLV Fall Invitational, by a second.

Showing off maybe some effects from a week of focused holiday training in this event, which she’s swum more than any other race this season, Richter was sluggish to start, but finished very well to make up ground on her own personal target. Richter’s closing 200 yards in San Diego took her 2:03.60; a week earlier in Las Vegas, those same 100 yards took her 2:05.45, despite the overall faster time.

For San Diego, four out of the five individual victories were concentrated in the hands of two swimmers: Sarah Reierson and Jackie Taylor.

Reirson swept the backstroke races, though it wasn’t for lack of competition from NAU. In the 100 back, Reierson swam a 1:00.64, just a fingernail ahead of the Lumberjacks’ Alex Huff, who was a 1:00.66 for 2nd place. Reierson made up that distance on the back-half after coming in almost a yard behind at the turn.

In the 200 backstroke, the junior from Medford, Oregon took charge from the get-go, and at the halfway mark opened up a full second lead on the field. Coming home, though, Jori Lundqiust (2:10.74) and Lindsay Clark-Warren (2:10.90) were able to make up some ground, especially on the third 50, to make this race a little closer at the final touch.

In the 100 free, her win came in 53.50 – well clear of the field with another strong back-half performance (though not a negative-split this time).

Both teams are off until the new year, when NAU next competes in Tucson against Arizona and Oregon State on January 2nd, while San Diego will host a relay meet on January 3rd featuring Air Force, Boise State, and San Jose State.