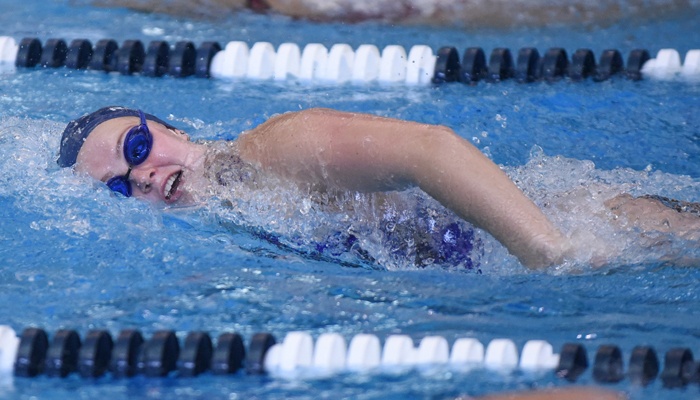 MOSCOW, Idaho – The Northern Arizona swimming & diving team picked up their first dual meet victory of the season in crushing fashion on Friday, 172.5-126.5, over Idaho on the second half of their weekend back-to-back. The Lumberjacks won 12 of 16 events and totally commanded the meet, their first against a Western Athletic Conference opponent this season.

“We won both relays, we won both boards and I’m really happy with how we bounced back from yesterday,” said head coach Andy Johns. “This was the best second day of a back-to-back that we’ve had in a long time. I’m so proud of the way we raced and their energy was awesome. Today was a total team effort.”

NAU received two wins each from juniors Kimmy Richter, Alina Staffeldt and Roni Houck, while also taking care of business on the diving boards. Senior Alexa Geiger and sophomore Tanya Kurach provided the ‘Jacks with their second diving sweep in three dual meets and the Lumberjacks also swept the relays for the first time this fall.

Kurach and Geiger combined to go one-two on the 3-meter springboard to get the meet off to a successful start for the ‘Jacks. Kurach, earned a season-best 3-meter score, winning the event with a total of 322.80. Geiger was right behind with a season-best score of 319.72.

After NAU’s diver set the tone, the Lumberjacks raced to a victory in the 200 medley relay. Seniors Sara Lenhoff and Urte Kazakeviciute teamed with Staffeldt and Houck to post a season-best winning time of 1:47.22. Richter followed with her first win of the day in the 1,000 freestyle with a time of 10:29.88, and junior Claire Hammond made it four in a row for NAU to open the meet with a winning time of 1:54.17 in the 200 freestyle.

The Vandals claimed half of their day’s wins in the next two events – the 100 backstroke and 100 breaststroke – only for the Lumberjacks to answer in the best way possible. Staffeldt led a one-two-three sweep in the 200 butterfly with a victory of nearly four seconds clocking a time of 2:02.92. Richter and freshman Kate Bier completed the sweep before Houck (24.38) and sophomore Andrea Schmidt (24.69) swept the top two spots in the 50 free heading into the first break.

At the break, Geiger collected the win on 1-meter with a score of 310.65 – her second season-best of the day. Kurach finished runner-up in the event at 287.92, while sophomore Christina Torrente placed fourth. The three NAU divers recorded one-two-four finishes on both springboards on Saturday, as they continued their season-opening dominance over their opposition.

Houck posted her second victory in the 100 free and completed NAU’s second four-event win streak of the meet immediately out of the break. Behind her time of 53.25 was Hammond, who notched a season-best time of 53.55. Idaho won the 200 back, and Kazakeviciute answered with a dominating win in the 200 breast. Kazakeviciute won the final breaststroke event with a time of 2:20.23 – more than two and a half seconds faster than the Vandals’ top swimmer – to erase her narrow runner-up finish in the 100 breast.

Richter completed her perfect day in the distance freestyle with a winning time of 5:03.45 in the 500 freestyle – an event NAU again claimed three of the four top spots – and Staffeldt claimed victory in the 100 fly with a time of 56.85.

The ‘Jacks would close the meet in style as Hammond, Staffeldt, Richter and Houck cruised to victory by more than three seconds in the 400 freestyle relay at 3:34.04 after the Vandals won the day’s final individual event in the 200 individual medley.

In all, NAU went one-two in five of its 12 event wins. The Lumberjacks defeated the Vandals for the fourth consecutive time and is now 10-1 all-time against their WAC rival.

NAU is off from competition next week before splitting up for multi-team invites the following week. The swimmers will head to Topeka, Kan. for the three-day Kansas Classic from Nov. 18-20, while the divers will host the Lumberjack Diving Invitational in the Aquatic and Tennis Complex on Nov. 19-20.

The University of Idaho Vandals fell to the Northern Arizona Lumberjacks on Friday at home. The final score was 172.5-126.5.

“As always, hard to be happy with a loss but we were really encouraged with what we saw tonight,” Coach Mark Sowa said.

“Our divers had some really good spots too, with three of those girls qualifying for zones which was great to see.”

“Our depth has improved tremendously and that was on display during the 200 freestyle, 200 backstroke, 200 breaststroke, and the 200 individual medley. Our top end will only continue to develop,” Sowa said. “Clothilde Peseux, Allie Magrino, and Leah Fisk had some strong performances today.”

“I am really enjoying coaching these girls and love their attitudes,” Sowa said enthusiastically. “We have two tough teams to race tomorrow. It should be a lot of fun.”

The Vandals take on Seattle University and California State University Bakersfield tomorrow at the UI Swim Center. Diving events begin at 10am and swimming events will begin at 12pm.