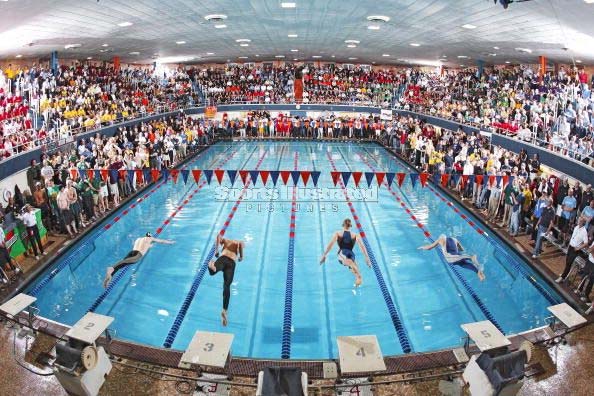 Heading into the 400 free relay, the final event of the evening, Libertyville led U-High by a margin of 96-91. Both Libertyville and U-High were in the A-Final of the 400 free relay, but U-High would prove victorious by touching first in 3:03.97. That victory earned University High School their first state championship in swimming & diving, and they are the first “downstate” school to take the IHSA crown in the championship’s 82 year history.  The Pioneers were led in large part by junior standout Jake Miller, who would take the IHSA title in both the 200 IM (1:48.08, a new IHSA record) and the 500 free (4:28.36).  In addition to Miller’s efforts, Adam Drury took the 200 free state title in 1:38.96 and U-High’s 200 and 400 free relay squads each took home state championship titles.

The other big story of the night was Sacred Heart Griffin senior and future NC State Wolfpack swimmer Ryan Held taking down two IHSA state records in the 50 and 100 free.  Held sped to a 19.76 in the 50 free, crushing the field by over a second.  Held took down current Stanford swimmer Connor Black’s record of 19.80, set just last year.  Held followed up his impressive performance in the 50 free by putting down a 43.73 in the 100, defending his state title and vanquishing Kevin Overholt’s 2009 record time of 44.06.

After taking a second place finish to Mundelein’s Connor Black in 2013, Sacred Heart Griffin’s Ryan Held was out for blood this year. Held took first in the 50 free and rewrote the IHSA record book with a 19.76, dominating the field by over a second and doing away with Black’s record of 19.80.  Mossimo Chavez of Whitney Young would take second in 20.89 and Matt Salerno from Matea Valley finished third in 20.90.

The 100 fly A-Final would see all six competitors earn All-American standards.  Steven Tam of IMSA came out on top at 48.43 followed by Libertyville’s Matt Harrington in 48.73.  Justin DeDianous of Normal Community West had the third position with a 48.78.

SHG’s Ryan Held further solidified himself as the greatest sprinter in IHSA history by winning the 100 free in 43.73, taking down Kevin Overholt’s IHSA record time of 44.06 set in 2009.  Brian Portland of Hinsdale Central took second in 45.28 and Whitney Young’s Mossimo Chavez took third in 45.89.

Jake Miller of Normal U-High doubled up on IHSA titles by taking the 500 free crown in 4:28.36 over Bloomington High’s Michael Wolfe who finished in 4:32.09.  Miller and Wolfe each split 3:06’s at the 350 mark, but Miller was able to turn it on and take a first place finish.  Jared Schimmelpfenning of Peoria Notre Dame took third in 4:34.09.

Libertyville’s Alex Snarski would take home the 100 backstroke IHSA crown in 48.99 followed by Steven Tan of IMSA taking second in 49.76.  Daniel Hein out of Dekalb earned a third place finish with a time of 50.28.

Metea Valley enjoyed a 1-2 finish in the 100 breast, seeing Jordan O’Brien just out-touch teammate Matt Salerno for the IHSA title.  O’Brien touched first in 55.88 with Salerno coming in just behind at 55.89.  New Trier’s Jae Park rounded out third in 56.21.

This coverage was amazing. Wasn’t able to attend the meet due to the impending weather situation in Illinois, but Mr. Wood has a bright future covering swimming. Thank you for the information SwimSwam!

Ack, I knew better than that. It’s corrected, thank you for pointing that out.

Held’s 100 free might be considered a state record, but no one has caught the 43.56 Grevers did leading off the 400 free relay his senior year.

Congratulations to all the swimmers and especially the new state record holders. Prior to Saturday only 2 state records were set at Evanston(slow pool, loose blocks) all others at New Trier. Great job boys!!!