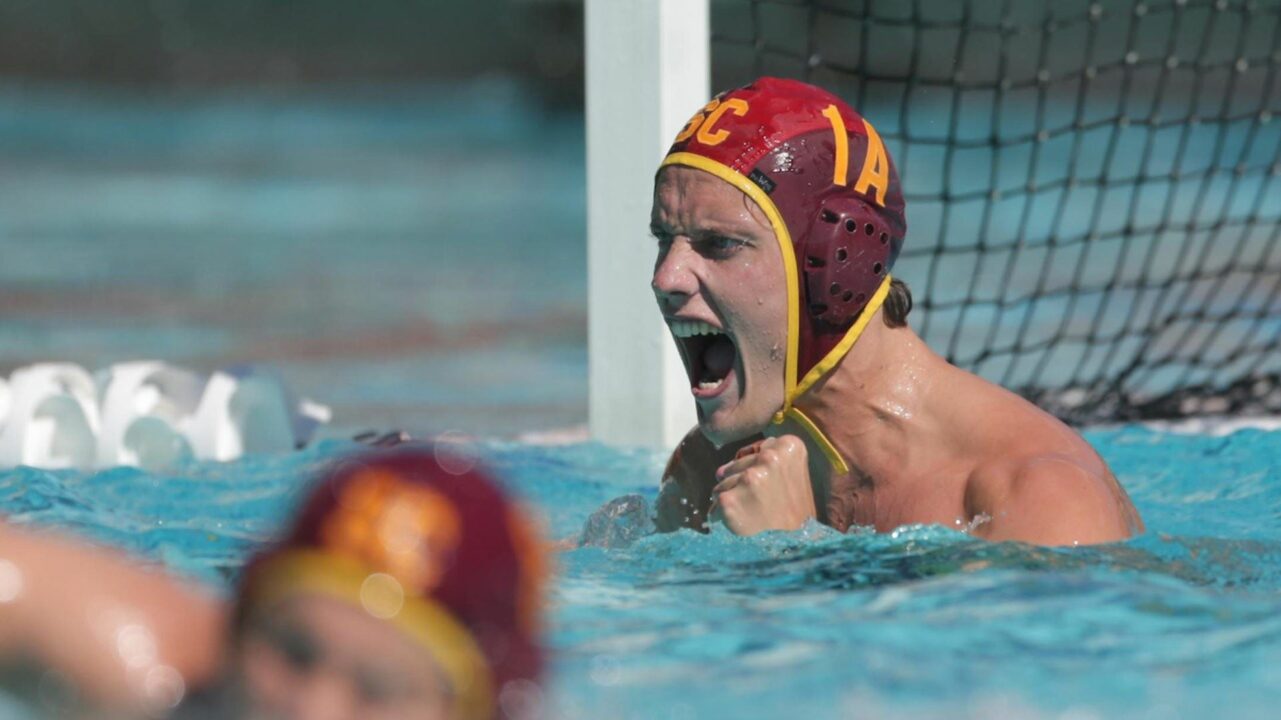 LONG BEACH, CALIF. — The No. 3 USC men’s water polo team forged a four-goal rally to take the lead from host No. 5 Long Beach State and stay there en route to a 13-9 Trojan victory over the Beach today. USC had three players — Wyatt Barker, Ashworth Molthen and Carson Kranz — net hat tricks in the win, while goalie Nic Porter hauled in 11 saves in the cage. The nonconference victory improved the Trojans to 13-1 overall.
USC was put on its heels for the first nine minutes of action as Long Beach State took the first lead of the game in a defensive first period. Luka Brnetic leveled it seconds later, but the Beach nudged ahead again with a goal on its first possession of the second. Again, USC found a fast answer, with Ashworth Molthen delivering a solo stinger to knot it at 2-2. That would serve as the spark for an offensive rally by the Trojans, who had Wyatt Barker earn and finish off a USC power play next. Carson Kranz hammered home a shot out of set soon after, and after Porter shut down a Long Beach State 6-on-5, Molthen found Barker for another 6-on-5 slam to make it a four-goal USC run to a 5-2 lead. The Beach went top corner a bit later, only to see Molthen set up Jake Ehrhardt for a rocket that had USC up 6-3 by halftime.
Barker went to work early again, nabbing a steal and then finishing off the counter himself to craft a 7-3 lead for USC and make it a hat trick for the grad student on the day. Porter squashed back-to-back Long Beach State attacks next, but the Beach would manage two goals in the next stretch to make it a two-goal game. Jacob Mercep would find Chris Sturtevant in the final minute of the third, and the junior sent in a sizzling cross cage bar-in blast to get USC some room again, up 8-5 entering the fourth. The final frame was a highly offensive affair as teams traded goals in the first two minutes. Molthen’s third of the day wrapped another Barker-earned USC 6-on-5, and then Molthen issued a booming field block to snub the Beach’s next power play chance. Kranz would strike next on a Trojan 6-on-5 to get USC its largest lead of the game, up 12-7 with 4:25 to go. He’d knock in his third a little later off a feed from Hannes Daube, and USC was well on its way to a solid win, finishing things out as a 13-9 Trojan victory in Long Beach.
NOTABLE:
– SR Nic Porter made 11 saves today, recording his 30th career game with double-digit saves and sixth such outing this season.
– With three goals today, SO Carson Kranz scored his second hat trick of the season.
– With three goals today, GS Wyatt Barker scored his third hat trick of the season.
– Barker also drew a game-high five exclusions today.
– With three goals today, JR Ashworth Molthen has now scored in six straight games.
– With two goals today, SR Jake Ehrhardt has now scored in seven straight games.
NEXT:
Next weekend, the Trojans get back to MPSF action with a trip to face Stanford at 1 p.m. on Saturday (Oct. 23) at Avery Aquatic Center.
#3 USC 13, #5 Long Beach State 9
Oct. 17, 2021 | Ken Lindgren Aquatics Center (Long Beach, Calif.)
USC   1 – 5 – 2 – 5 = 13
LBSU 1 – 2 – 2 – 4 = 9
SCORING:
USC — Wyatt Barker 3, Ashworth Molthen 3, Carson Kranz 3, Jake Ehrhardt 2, Luka Brnetic, Chris Sturtevant.
LBSU — Rafael Real Vergara 3, Alika Naone 2, Garrett Zaan 2, Theodoros Pateros, Aaron Arias.
SAVES: Nic Porter (USC) 11, Andrej Bosanac (LBSU) 5.

Spreading out the scoring options for players not named Daube (Olympian) or Mercep and Ehrhardt (All Americans). Three Trojans with scoring hat tricks – Barker, Molthen and Kranz. This was against a talented Long Beach State squad ranked #5 in their home pool.