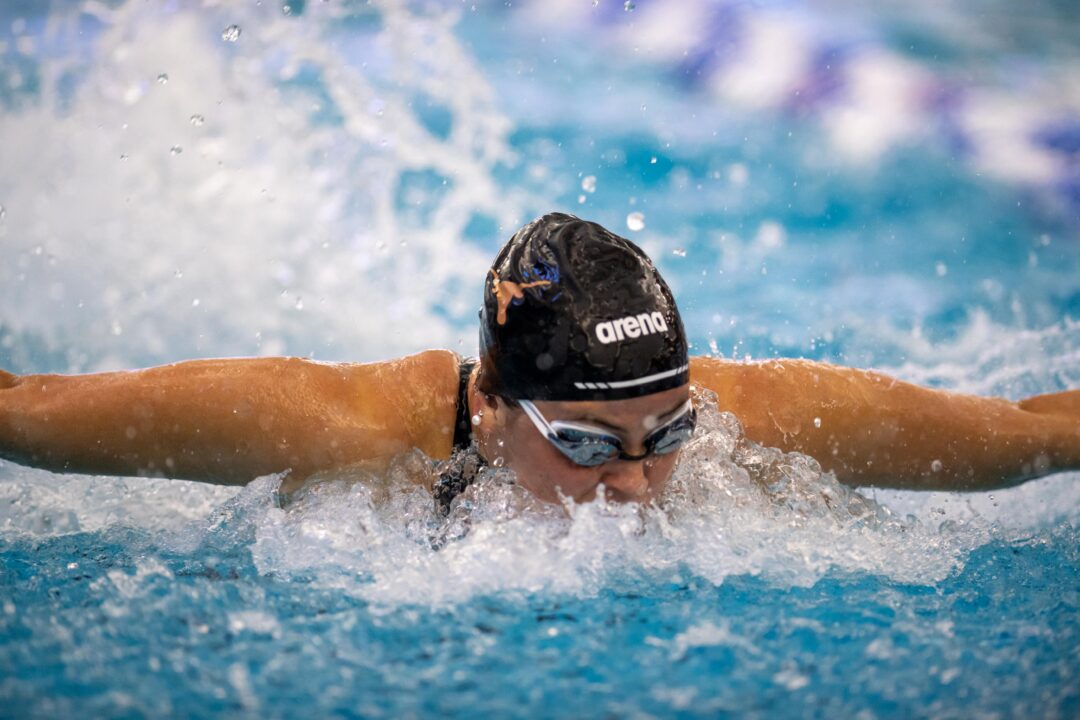 The meet was a showdown between some of the best women swimmers in the nation, featuring races that came down to a couple tenths of a second. Archive photo via Luke Jamroz Photography

In a meet defined by close races, the Texas women narrowly defeated NC State by just over 10 points on Friday. Along the way, the teams set six pool records total.

The meet was part of NC State’s senior night, with the men competing against UNC Wilmington.

Both teams are now finished with the regular season,

Texas competed against UNC on Saturday, and has a meet against SMU in early February, but NC State is now prepping for its conference championship in mid-February.

Sophomore Anna Elendt swept the breaststroke races, setting pool records in the 100 (59.25) and 200 (2:08.13). The German swimmer has international experience in the stroke, finishing within the top 8 at the 2019 World Championships in the 50m breast. She also won gold in the 50m breast and bronze in the 100m breast at the 2019 FINA World Cup. Elendt’s times at this meet were her 3rd-fastest in each event this season.

Fellow sophomore Olivia Bray also set a pool record in the 100 fly (52.12). The time is Bray’s third-best this season, and fellow Longhorn Emma Sticklen has the fastest team time this season at 50.76. Sticklen came in 2nd at this meet with her time of 52.62.

As can be expected by two of the top teams in the country, some of the events in this meet came down to just a few tenths of a second.

Berkoff won the 100 back (51.63) and 200 back (1:53.31), winning the meet in front of Texas’ Bray by less than a second in both events. Though the 100 back was a close race, it was one of Berkoff’s slower races–she has regularly swam the event between 50 and 51 seconds. The 200 back time is Berkoff’s 3rd-fastest this season. Berkoff has the fastest times on the team in both events from previous meets.

Of course, the closest event ended up being a tie for first in the 50 free between NC State’s Alons and Texas’ Bridget Semenuk, who both swam 22.92.

Some of the most intriguing surprises came in the exhibition races. Miranda Heckman, who swam her previous two seasons at Texas, appeared on NC State’s roster for the meet. She exhibitioned the 200 free (1:51.51) and the 100 free (52.00). She also swam as part of the exhibitioned NC State 400 free relay, which swam a time of 3:25.95.

Heckman has previously won a silver medal at Big 12 Championships, and helped Texas by winning 29 points at the most recent conference championships. In her decision to leave the Longhorns, Heckman said that she finds change in general a necessity to grow in her swimming career.

Fantine Lesaffre, a French Olympian, also swam unattached in an exhibition at the meet, posting a 1:57.47 in the 200 IM.

According to her Instagram, Lesaffre has been in North Carolina since at least early January, when she announced that she would be swimming with the Wolfpack Elite team at NC State.

Just a dual meet but the Wolfpack Women got ‘Cal’d’. Lost by 13 and shutout on the boards getting outscored by 30. Seem to making progress with new dive coach but still a ways to go.

Sorry, can you go over the rules of PEMDAS for us?

I discounted the ‘participation pity points’ and scored it straight up since UT swept 1-5 in 1mtr and 1-4 in 3mtr. The Pack are big girls who don’t need points just for showing up.

You can’t use “outscored” as your phrase and then ignore the NCAA scoring rules.

Also saw that Shannon Kearney retired congrats to her.

Impressive win on the road for the Texas women, particularly in that pool. They’re looking very good for top 3 at NCAAs – I’d pick them for 2nd currently.

I’d say third, I think UVA/Stanford will be step ahead of everyone. Then the next tier is like Texas/Cal/NC state and maybe Bama?

I’d probably put Bama just outside the second tier. They have equal top end talent (maybe better?) and relays than those 3, but they don’t have the depth for as many B finals.

I really think team scores will end up as:
UVA, Stanford, Texas, NCS, Cal, Alabama (3-6 will be very close and could go a multitude of ways)

Stanford could finish ahead of Texas, on paper they have more potential. But Texas has a more complete team. It could go either way, but I like Texas slightly more to finish ahead of Stanford (and NC State).

Me say they get 7th to show silliness in such speculation.