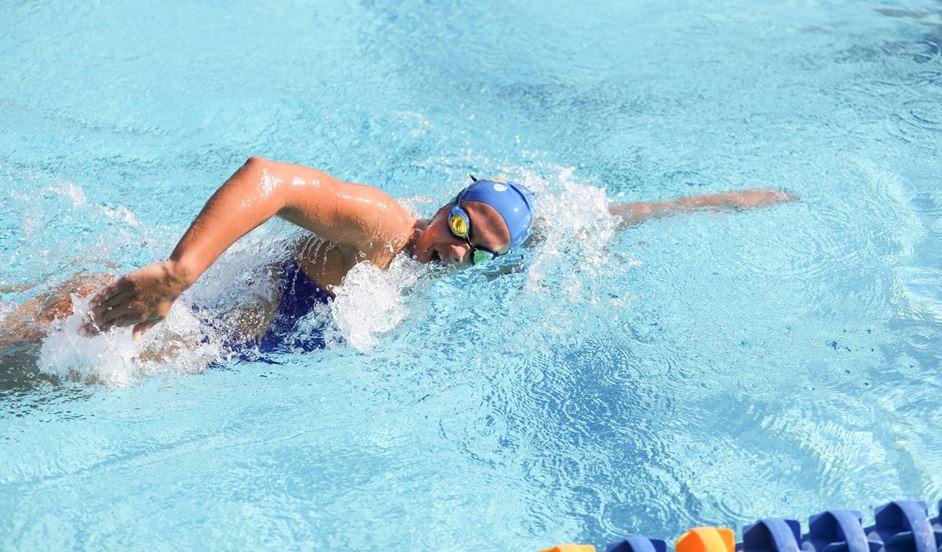 The UCLA women spread the wealth with nine swimmers winning an individual event in their Saturday dual against UC Santa Barbara. Current photo via Ariana Saigh

The UCLA women were dominant in their season-opening dual meet against UC Santa Barbara, winning 11 of 14 events en route to a decisive 167-92 victory. This was the team’s first dual of 2021-22 after competing at the Fresno State Invitational Oct. 8-9.

The Bruins had nine different swimmers place first in individual events, plus they swept the relays.

Junior Brooke Schaffer was among the top performers, winning the 100 freestyle (51.71), placing third in the 50 free (23.73) and also swimming on both winning relays. Teammate Sophia Kosturos touched first in the 50 free (23.62).

Rhee added a win of her own in the 200 free, clocking 1:50.63, and swam the anchor leg on the winning 400 free relay along with Delaney Smith, Schaffer and Ella Kirschke as they finished three seconds clear of UCSB in 3:28.57.

UCLA head coach Jordan Wolfrum noted that the team is in heavy training and that the meet was more about racing than times.

“I’m really happy with our toughness and a lot of our race execution,” Wolfrum said. “We look tired and beat up, because we are. I think that’s good, I think I would have been a little more concerned if we didn’t look that way after our first dual meet.”

Both teams will be back in action on Saturday, Oct. 30, as UCLA battles Pac-12 rival Washington State and UC Santa Barbara takes on Cal Poly.

Wolfrum has more depressed and anxious swimmers than successful/happy ones. What’s happened to UCLA and this program?