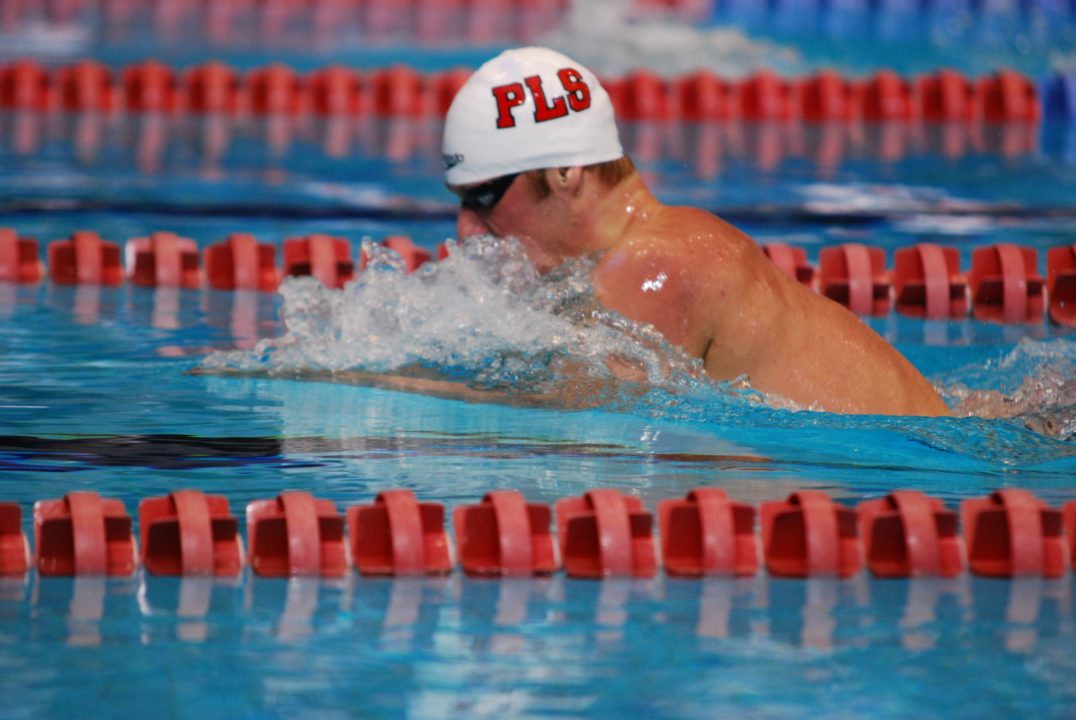 Nick Silverthorn of the Pleasanton Seahawks has verbally committed to Cal. Current photo via Janna Schulze/SwimSwam.com

Nick Silverthorn has verbally committed to the Cal Golden Bears, marking the biggest addition to Dave Durden’s class of 2014.

Silverthorn, who holds three 11-12 National Age Group Records, was primarily a middle-distance freestyler when he was younger, but has really matured and become a spectacular IM’er and breaststroker in the last year.

As noted, his breaststrokes have become really good. He was a part of that race last year where three guys broke the National High School Record, and he has a shot at being the first high schooler ever under 53 this year.

The book on Silverthorn from one coach we spoke with is that worst case, Cal gets a solid conference scorer and a great “team guy.” Best case, they get an All-American breaststroker who can contribute on all 5 relays, due to his good size (he’s 6’3″ and very strong).

Cal’s class so far is small-ish, but it’s full of stars. That includes Connor Green, Kyle Coan, Ryan Kao, and more recently Connor Hoppe. They also brought in another breaststroker, Matt Whittle, who goes 55.2 and 1:59.0.

Between Coan and Silverthorn, Cal has the foundation to have one of the country’s best freestyle groups, and between Hoppe, Whittle, and Silverthorn, their presently-unstable breaststroke group looks suddenly very good.

Silverthorn swims for Granada High School and the Pleasanton Seahawks.

Congratulations to Nick and to his coaches – Steve Morsilli and Todd Tucker for all their great work in the Pleasanton Seahawks program.

Where did the other two breastrokers in that epic high school race last season, Steven Stumph and Charlie Wiser, end up going? That had to be one of the best races in high school swimming history. I think Silverthorn went a 53.6 and still got only third!

Great get for the Golden Bears in a prior area of need. Congrats to Nick, Dave, and Yuri. Cal allegedly also has a commit from a fourth breaststroker, Zach Stevens, from the Central Coast (San Luis Obispo). Durden and McKeever should push the NCAA to get rid of distance and diving events in favor of stroke relays.

Was just kidding, alluding to Cal’s misadventures in diving and distance. The Golden Bears are the US Navy in stroke and the Somali Pirates in distance.