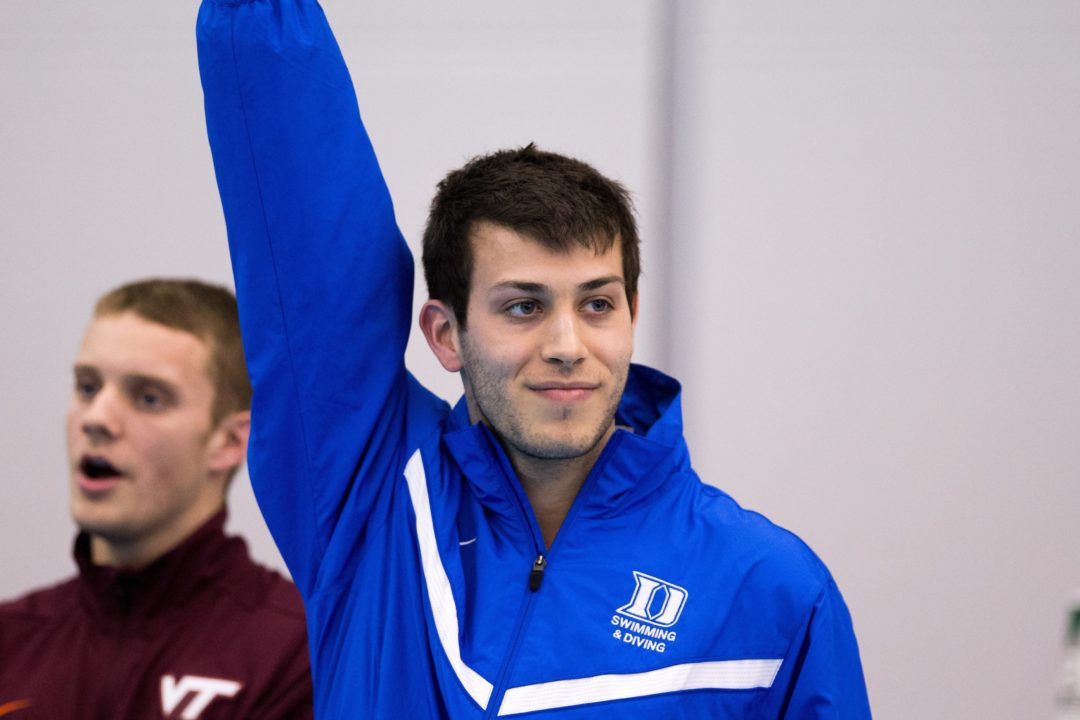 Three-time NCAA Champion Nick McCrory will stay at Duke to dive out his senior year, with some lofty goals. photo via Tim Binning/TheSwimPictures.com

The Duke Blue Devils have released their 2013-2014 roster, and the most noteworthy name on it is diver Nick McCrory.

McCrory, a 2012 U.S. Olympian who combined with David Boudia to win the men’s 10-meter platform, will return to Durham for his senior season. This is big news given that his coach, Drew Johansen, took the head coaching job at Indiana this summer.

He’ll now dive primarily under Nunzio Esposto. This ended up being just about a perfect situation for McCrory, because of his familiarity working with Esposto.

Though his credentials aren’t quite what Johansen’s were, Esposto has a long history in the sport. He spent 5 years as the head coach at rivals North Carolina, and from 2003 through 2007 was the head coach of the Blue Devil Diving club.

That means that he was the coach who led McCrory to a silver medal at the Junior World Championships in 2006 and guided him onto a spot on the Junior National Team. Esposto and McCrory have known each other since the latter was 7 years old, so the familiarity there exists.

In a recent interview with GoDuke.com, the school’s official athletics, site, Esposto said that “there’s a sense of excitement” in the natatorium after spending the summer working with incoming freshmen Kirby Quinn and Cole Plambeck, in addition to “a little bit” with McCrory.

Esposto is aiming high in his first year back on the college scene. He said that he’s guiding McCrory toward sweeping the NCAA diving championship.

McCrory is a three-time NCAA Champion, in 2010, 2011, and 2013, but has been constantly eluded by the springboard events. That’s in part due to having to match up with his synchro partner David Boudia for those first two years.

Like much of the U.S. Olympic Team, McCrory took his 2013 season a bit easy. He still took 2nd on the 3-meter and the 1-meter though, in both cases comfortably behind Stanford junior-to-be Kristian Ipsen.

If McCrory can turn things back on this year, though, he could well complete that goal.