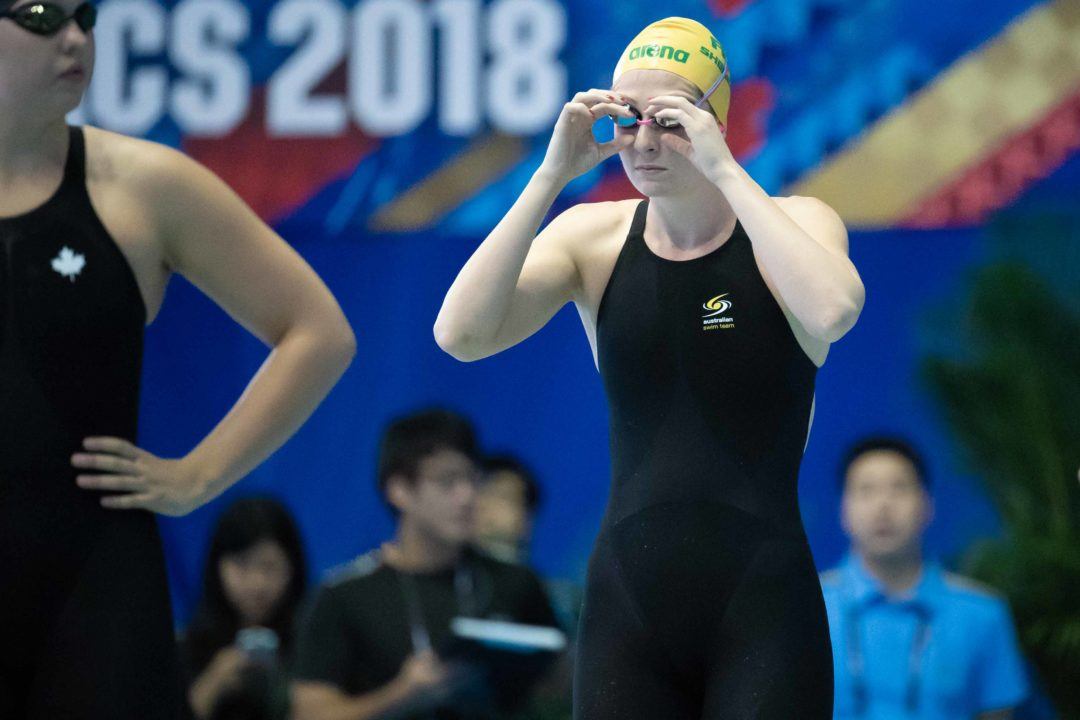 Mikkayla Sheridan (above) and Brendon Smith will be the 4th and 5th Australian swimmers to represent the New York Breakers this year. Archive photo via Mike Lewis/Ola Vista Photography

The New York Breakers of the International Swimming League have added 3 new faces to their roster for this weekend’s US Derby meet at the University of Maryland. Brendon Smith and Mikkayla Sheridan will join a roster that includes fellow Australians Madi Wilson and Clyde Lewis this weekend. The team will also add University of Tennessee-based Ryan Coetzee to their roster for the Derby.

The Breakers have a 5th Australian on their team, Jack McLoughlin, but McLoughlin is absent from the team’s lineup for their final meet of the season.

Coetzee, meanwhile, finished a 9-time All-American career at the University of Tennessee in 2018. He’s another South African on a roster full of ties to the country – general manager Tina Andrew and head coach Peter Andrew are both South African by birth, and the team has South Americans Chris Reid and Brad Tandy on the roster as well.

Coetzee is primarily a butterflier, and was on South Africa’s team for the 2019 World Championships. He was just 36th in the 50 fly and 30th in the 100 fly at Worlds, but both times were well-off his bests.

All 3 swimmers are direct replacements for key Breakers who will be missing this weekend. Smith will replace Jonathan Gomez, who struggled through his first 2 meets with the Breakers scoring a net of just 3 points in 2 races in Budapest (including a 1 point penalty). He will miss the meet with an undisclosed health issue. While the change was driven by a health issue, after a breakout summer, the move could be an upgrade for the Breakers – though on paper, Smith doesn’t replace Gomez in his best event, the 200 fly.

Coetzee, meanwhile, will replace Germany’s Marius Kusch, who scored 10 individual points in 3 races in Budapest – including a 3rd-place finish in the 100 fly. He was the Breakers’ best 100 butterflier through the first 2 meets. The Breakers had announced another butterflier, Justin Lynch, but Lynch is not on their roster for Maryland – meaning he won’t make an appearance for the team in 2019.

Update: Kusch did wind up swimming at German Nationals.

The team will also be without Jacob Pebley, who raced only at their first meet in Lewisville, and Alys Thomas.

The team has also announced the addition of 2 new coaches to their staff: Don Wagner, the CEO and head coach of the Phoenix Aquatic Club, and Joe Benjamin, the head coach of Rancho San Dieguito Swim Team.

Wagner is a former head coach at Texas A&M University and the University of Alabama. He also worked at the Fullerton Aquatics Sports Team (FAST) where he coached 4-time Olympic gold medalist and hall of fame swimmer Janet Evans en route to her World Record in the 800 free.

Benjamin was named the San Diego Imperial Swimming Senior Coach of the Year in 2018.

Both coaches have achieved the highest status, level 5, from the American Swimming Coaches’ Association.

“We have an amazing team and exceptional staff and over the past two events, NY Breakers became a family,” General Manager Tina Andrew said. “We came up short of some of our goals at our first 2 meets but we are playing the long game. We are building a solid foundation where the only way is up. We don’t view our results as ‘losing,’ but as ‘learning,’ and we will continue with our team mantra of pushing the envelope and thinking outside of the box until we stand on top of the podium.”

The Breakers finished 4th in Group B action at their first 2 meets, which mathematically eliminates them from contention from the Las Vegas final. While they were beaten soundly by London Roar, the LA Current, and Iron at those meets, Group B was the deeper of the two groups, so the Breakers still have something to race for at the US Derby: an opportunity to pick off the Katie-Ledecky-less DC Trident. The Breakers will have to rely on a deep breaststroke group, which included a sweep of the 200 meter races in Budapest from Emily Escobedo and Marco Koch, and better swimming from vice-captain Michael Andrew to move up in the standings.

This NY team is really bad compared to the others

We all know this whole ISL is London Roar to lose..

Once I met an old man who was a guard of grain reserve at the time when it was ration on bread. He told me about his life then: “What you are guarding that’s what you are having”.
ISL format, rules, recruiting process and prize distribution was designed in London. Hosszu and Pellegrini were, if to use Don Corleone terminology, just pimps.

Its just that Roar got the core of the Australian team as a unit . Chambers Campbells Atherton Winnington Wilson McKeon because Rob Woodhouse is an experienced Sports Agent & they came prepared .. its called professionalism .

There is no comparison to the DC team of WIMMIN ‘r’US or the wacky outfit from the metroplis up north. .

That not everything is peaceful and euphoric within ISL will be seen as soon as the top swimmers of the winner of the Final Match will get their prizes. In no way it can be comparable even to Wimbledon quarterfinal or World Cup winner. But the huge difference in money earned between few recipients of these noticeable prizes and majority of the rest of the league will so visible that there certainly will be questions why this outcome was predetermined in London’s meet of ISL organizers. Why the German team died almost immediately after creation? Why there were so much hesitation on American side. Is it because they felt that there wouldn’t be a fair share?
You can attribute… Read more »

London getting first dibs on Australians isn’t much different to what would happen if there were an Australian team. I think because of the extra travel Aussies have to do they’re probably always gonna gravitate mostly to a couple of teams so they can travel in groups.

Yep, & the 3 Deloof sisters continue going to every meet trying to earn that $.