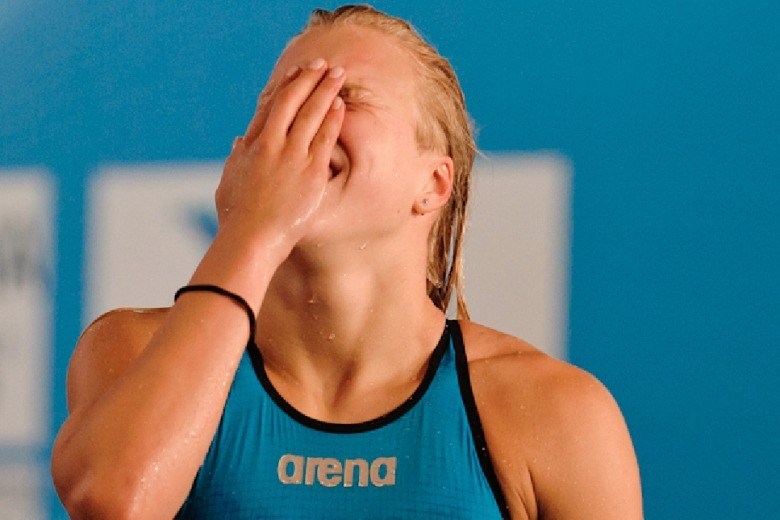 Get Your Swimming Feel For The Water Back With Aqua Knuckles

Swimmers and coaches will find using Aqua Knuckles at the beginning of workouts is best because swimmers have their best attention to detail at this time.

As the 15th FINA World Championships wound to a close on Sunday in Barcelona, global aquatics brand Arena counted up its most successful World Championship return in recent history, with almost half of all medals awarded in the pool and open water going to swimmers wearing Arena suits. All told, Elite Team athletes, Arena-sponsored national federation swimmers, and others that donned the three diamond suits delivered 23 gold, 24 silver, and 20 bronze medals – 67 out of a total of 138–  along with three of the six new world records set over the course of the pool competition.

Leading the Elite Team champions with two individual gold medals were South African Chad Le Clos (100m & 200m fly) and Hungarian Katinka Hosszu (200m & 400m IM, as well as a 200m fly bronze), while Russian federation swimmer also won two golds (50m & 200m breaststroke), a silver (100m breaststroke), and a bronze (4x100m medley relay). Producing an impressive all-round performance, Efimova set new national marks in all three of her individual events, while also setting a new world record in her 50m breaststroke heat (29.78), before having it broken several hours later by Elite Team member Ruta Meilutyte in the semi-finals (29.48). Although the 16-year-old Lithuanian finished second behind Efimova at 50m, she was victorious in the 100m breaststroke, in which she also broke the world record in the semi-final (1:04.35).

Another standout performance came from recently recruited Elite Team swimmer James “The Missile” Magnussen of Australia, who successfully defended his 100m freestyle world title from Shanghai in 2011. Powering to victory with a late surge in 47.71 successfully put the disappointment of his narrow loss (by 0.01s) at the 2012 Olympics in London behind him, and reestablished him as the fastest man among an incredibly strong 100m field. He also swam the fastest anchor leg in the 4x100m medley relay, to carry his team to the silver medal.

In the open water competition, Arena Elite Team athletes stood out as they won eight medals between them. Germany’s open water legend Thomas Lurz once again led the way with two golds (25km, 5km team event), a silver (10km), and a bronze (5km), while Tunisia’s Oussama Mellouli was not far behind with a 5km gold and 10km bronze. At 38 years of age, perennial performer Angela Maurer from Germany also found form with a 25km silver and 10km bronze.

“One year on from our landmark results in London, Arena swimmers have not only consolidated their positions at the top of the sport, they have actually advanced them,” said Cristiano Portas, Arena CEO. “The results in Barcelona are testament to the fact that our Olympic performances were no flash in the pan, and that both the swimmers and their swimsuits have more than earned their positions in the upper echelons of the sport. We are thrilled at the results of the next generation POWERSKIN Carbon-Pro Mark 2, and how frequently it was the most-worn swimsuit on the starting blocks.

“Our congratulations go to FINA and Barcelona for once again putting on a hugely successful global showcase for our sport, and of course also to those of our swimmers who tasted success.  It was rather poetic for Chad to win his first 200 fly world title exactly a year to the day after his London heroics, just as it felt like just reward for Katinka to get the returns that her incredible workload deserves. Ruta remains an exciting talent, Daniel (Gyurta) continues his dominance, and it’s great to see what new bloods like Vladimir (Morozov), Gregorio (Paltrinieri), and Radoslav (Kawecki) can do, as well as get on to the podium.

“To me, the future of our equipment and our swimmers looks as promising as ever.”

This is a press release. Arena USA is a swimswam partner.

so Arena had a good marketing campaign

Do we have the numbers of how many swimmers wore Arena suits overall? Be interested to see the ratio.

or at least what percentages of finalists. i really hope we don’t have more suit controversy

Caitlin Leverenz announced her Arena deal during the Worlds. He twitter page still features a background picture of her swimming in a Cal cap with the Speedo logo prominently displayed.