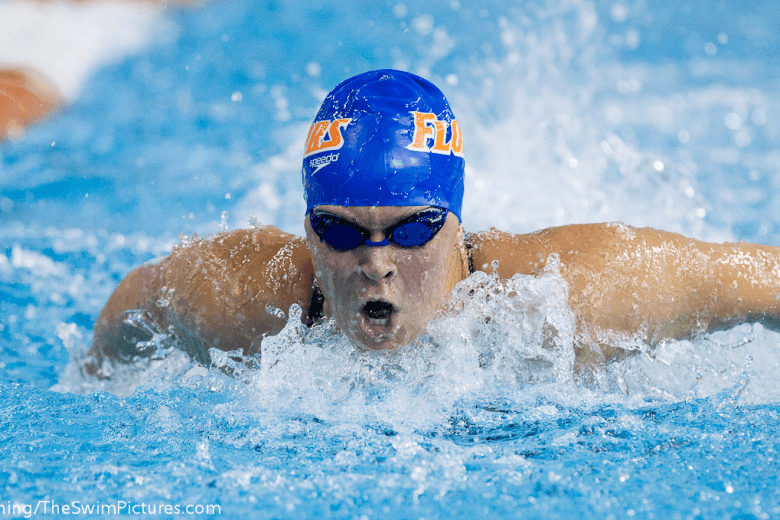 Hosszu, Beisel, Leverenz, DiRado, Vavra. All could break four minutes in the 400 IM. Over/under set at 3.5 What's your pick?

For the first time in history, the 2011-2012 NCAA women’s season has seen more than one swimmer under the 4-minute barrier in the 400 IM. At NCAA’s, in fact, seeing three in the A-final under that mark is just about a given, with as many as 5 a possibility.

USC’s Katinka Hosszu, the defending champion; Cal’s Caitlin Levernz, the rising star; and Florida’s Elizabeth Beisel; the former prodigy and defending World Champion, have all cleared that barrier already this season. Stanford’s Maya DiRado and Indiana’s Allysa Vavra are on the verge of doing so as well.

But they’re all going to get there different ways. None of these five women swim the IM the same, so here’s a breakdown of how things might be expected to go in Friday’s final.

Hosszu is the butterflier in the field. She swims a mean 200 fly European Champion, and can usually get a lead on the field after the first 100 yards without expending a whole lot of energy. Last year, she consistently pulled off 54.3’s in big races, even with fluctuations otherwise in the race. But the rest of the field has caught up to her in a big way since last year. Beisel and Leverenz will both be a full second faster on the first 100 than they were last season, and neither, and neither has had to sacrifice the backstroke to do it. DiRado has more speed in the fly this year as well, but based on what we saw at Pac 12’s, she might be better served to back off that leg and focus on easy-speed at NCAA’s.

On the backstroke, Beisel is the class. She, along with DiRado, could get to 59-lows on that leg. Hosszu could get there as well, though it will take a bit more energy on her part to do so. Vavra should be pretty even around a 59-high. This is the leg where Leverenz really struggles, though she’s clearly put a lot of effort into improving it. If she can hold onto the 1:01.4 that she had at Pac 12’s, she should be doing well headed into her dominant breaststroke leg.

And that breaststroke leg she really does rip into, so it may be in fact that she intentionally lays off the backstroke. At Pac-12’s, she split a 1:06.2 on the breaststroke leg of her 400 IM. The only swimmer in this field capable of even coming close to her split is Vavra, who will need to be a 1:08 low to go under 4 minutes. Hosszu is not a bad breaststroker herself, but will probably give up about three seconds on that leg alone. This is the only leg where DiRado gives up a lot of ground to the field, which could be even more pronounced this season where she’s putting more effort into her butterfly.

And then there’s the closing freestyle. DiRado doesn’t have a single leg where she’s the best, but she is an outstanding closer (should dip under 55 seconds on the final 100). Beisel has really improved her closing ability since last year’s NCAA’s. This was evidenced by her world title in the race where her closing freestyle was the big difference maker for her. This is another area that an in-the-zone Vavra would make a big move coming off of her breaststroke leg.

Based on my day 2 predictions of the NCAA Championship meet, here’s how I could see the splits working out.