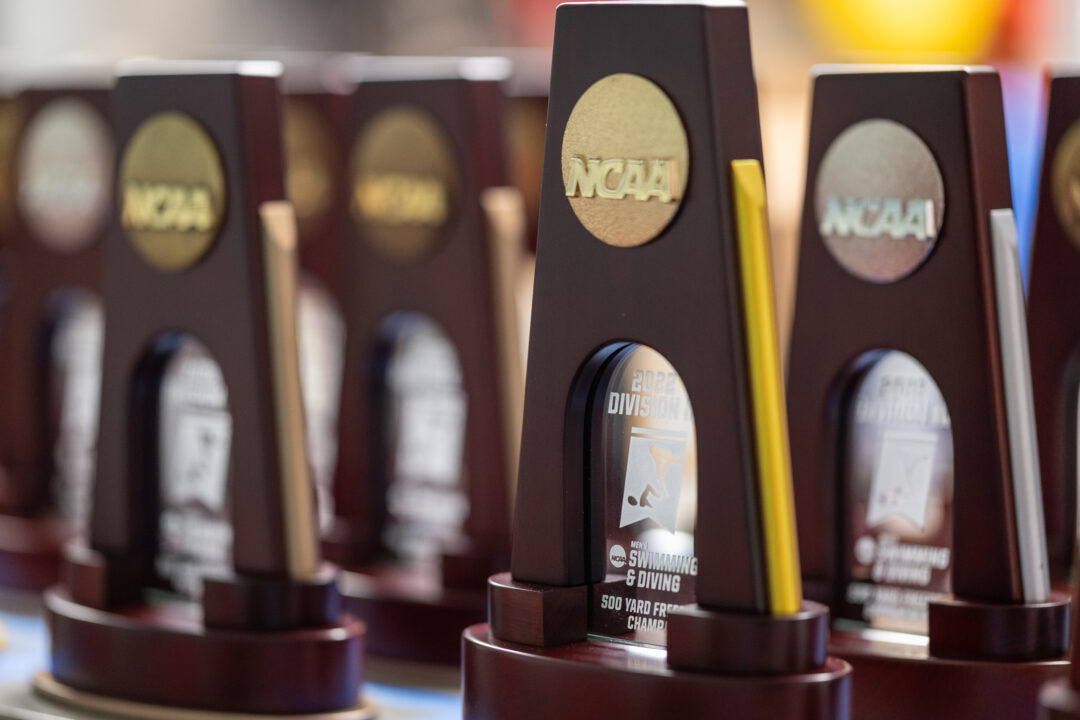 The NCAA Division I Swimming & Diving Committee has created a rule about who gets a trophy immediately, and who has to wait for the mail, in the event of a tie. Stock photo via Eugene Soh

The NCAA has implemented a new policy about who receives trophies immediately, and who has to wait, in the event of a tie at the NCAA Division I Swimming & Diving Championships.

At its meeting in April, the NCAA Division I Swimming and Diving Committee agreed that in the event of a tie in the championship A final, the trophy will go to the oldest by birthday. The younger student-athlete will hold a stand-in trophy for the awards ceremony and will be mailed a trophy following the championship (standard delivery is four to six weeks after the event).

In other words: when two-or-more athletes are tied, seniority rules.

Previously, there was no publicly-stated policy on what would happen with regards to the ceremony in the case of a tie. Because each trophy has a specific event and place on it, there is only one trophy at the championship for each placement in the A-final of each event.

Normally, this wouldn’t be an issue, but the committee was forced to address it last year after Kentucky swimmer Riley Gaines and Penn swimmer Lia Thomas tied for 5th place in the 200 free at the women’s championships. Thomas, a transgender woman, was given the original 5th-place trophy, while Gaines was given an alternate trophy to hold during the ceremony. Hers was mailed later.

Appearing on a podcast in the spring, Gaines, who has become a face of a national campaign against the participation of transgender women in women’s sports, says that she believes the decision was made to “save face” amid the controversy.

“Once I got out of the water, we kind of go behind the podium to the awards ceremony where they distribute the trophies. So, I walked back there and the NCAA official came up to me and said, ‘Hey, we only have one fifth place trophy’ — which I understood.

“But he said, ‘We’re gonna have to give that trophy to Lia. Yours will be coming in the mail. Great job.’ I was kind of taken aback. I don’t think he necessarily expected me to really question it, but I was like, ‘Okay, I understand, but can I ask why you’re choosing to give the trophy to Lia?’”

“So then, I was thinking, ‘Chronological order,” Gaines continued. “We just tied. I don’t really know what we’re being chronological about. So can you explain?’ He kind of just looked at me and said, ‘We have to give the trophy to Lia but we respect and admire you so much.’

Gaines’ accusations forced the NCAA to create a formal policy on the matter to avoid uncertainty or accusations of impropriety in the future.

i still think my pineapple idea is a good one but whatever happened to flipping a coin? If it’s good enough for ties in NFL games it should be good enough for NCAA swimming.

So Lia would have gotten it first with this rule as well. And it was by lane order the first time so I’m a little confused why there is a rule to begin with. Earning a trophy is an achievement in itself. Most people don’t get that. Having to wait a little longer for it signifies impatience on the athletes part, there is no discrimination from the NCAA or the meet itself.

Welp, guess I’ll wish Gaines luck in joining the “find literally anything and everything to be aggrieved about” industry.

On a related note, how do they solve prelims ties outside of ties for 8th and 16th? Is it by age as well? Seed time? Alphabetical order?

As silly as this all is (just have extra trophy & placards ready, duh), why would the younger swimmer not receive priority? After all, they swam as fast a time at a younger age; a more impressive achievement.

The reasoning was not explained, but I have two theories:

1) Completely arbitrary
2) In the situation where one is a senior and one is a freshman, the freshman ‘stays in the program’ whereas the senior might be moving on with their life, so makes some sense to get them their trophy sooner. Freshman will have more opportunities to win later.

Don’t give it to either of them. Mail it to both of them. If they both absolutely have to hold something for the photo, keep a few spare pineapples around for such a contingency. Aloha and welcome to the award ceremony.

Here’s an idea. The NCAA spends a wee bit more money and have some extra placards made that you slap on some blank trophies in the back, should a tie occur. There, I fixed it. It’s not that friggin hard people. Money solves this problem in about two seconds. I mean, WHO IS RUNNING THIS CLOWN SHOW? (Ps The clowns)

What if THREE people tie!? Gonna have to have 8 trophies for each of the places.

the glass on those is engraved. it is not as simple as a placecard

Everyone knows why they did it, it’s not rocket surgery

Literally nobody but the two swimmers on the podium knew the difference of who got what until Riley went on her national tour. An implication that they’re trying to “save face” is ludicrous.

Ever run a swim meet? I can tell you exactly how this went. They hand one swimmer the real trophy, one the sub. The one who gets the sub trophy cops an attitude and complains. Person whose job it is thinks to themself “I literally don’t care, my job is to get you on the podium with a trophy please get on the podium with a trophy” and then starts saying nonsense that they hope will just make it stop so that they can move on with… Read more »