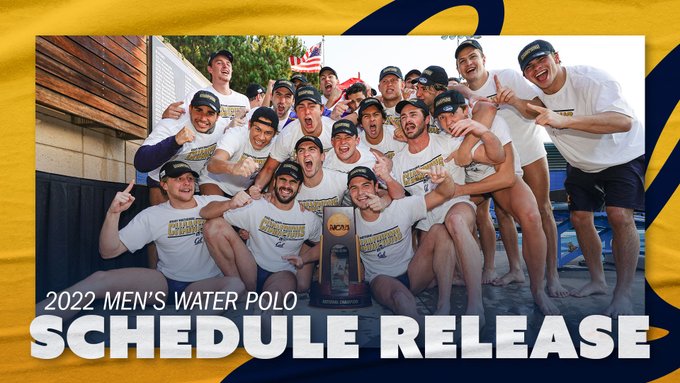 The season will culminate with the Bears defending their NCAA Championship title at Spieker Aquatics Complex on Dec. 3-4. Current photo via @CalWaterPolo/Twitter

The defending NCAA champion Cal men’s water polo team will play its usually daunting schedule in 2022, a season that will culminate with the Bears hosting the NCAA Championship at Spieker Aquatics Complex on Dec. 3-4.

Cal opens the season Sept. 18 at the Aggie Roundup at UC Davis, and almost every one of its opponents in 2022 finished last season ranked in the final CWPA Top-20. The Bears play their first home game on Oct. 12 against UC Davis before hosting USC to open MPSF play on Oct. 15. Cal defeated the Trojans 13-12 in the 2021 NCAA title match.

The Bears will once again take part in the annual MPSF Invitational, this year hosted by Stanford. The tournament features 16 teams, all of which are ranked in the CWPA Top-20.

Cal will appear on the Pac-12 Networks twice during the season – Oct. 29 at UCLA and Nov. 12 in the Big Splash at Stanford.

All but one of the Bears’ known opponents finished last season ranked in the top-10. Cal has a strong chance to add to that list at the MPSF Invitational, the MPSF Championships and the NCAA Championships.