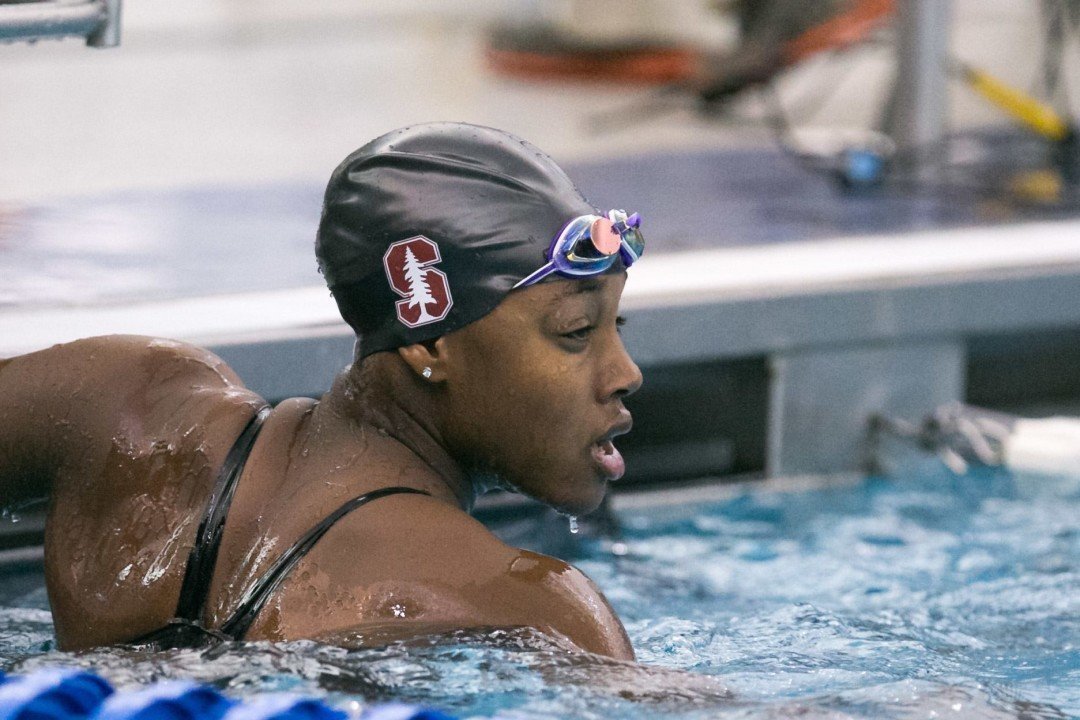 Stanford's Simone Manuel (above) and Kassidy Cook, both of whom were favored as NCAA Champions this season, will both redshirt. Archive photo via Tim Binning/TheSwimPictures.com

Simone Manuel, the defending NCAA Champion in the 50 and 100 yard freestyles (including the fastest swimmer in history in the latter of those races) has decided to sit out the 2015-2016 NCAA season.

Manuel was ominously absent from the team’s first two meets, resounding in-conference wins over Washington State and Utah, leading to speculation that she might choose to sit out the season in preparation for the 2016 Olympic Trials.

The news was confirmed today by Stanford head coach Greg Meehan. This makes her the third favorite for an NCAA Champion who won’t race this season for the Cardinal – World Record holder Katie Ledecky already announced that she was deferring her freshman year at Stanford to remain on the east coast and prepare for the Olympics with Bruce Gemmell; and diver Kassidy Cook has decided the same (2nd in the 1-meter at NCAA’s last year).

“After careful thought and discussion with my coaches, I have decided to redshirt and shift my focus to long-course training and competition for the upcoming year,” said Manuel, who was also named a Scholar All-America first team selection last season. “I am still training with Stanford University and will continue my journey academically. I am fortunate and grateful to be a part of the Stanford family, as we share and support each other on our journeys.”

Manuel finished the 2014-2015 NCAA season as the fastest swimmer in history in the 100 yard free (46.09) and very close to the same honor in the 50 yard free (21.32). Including relays, she earned 4 NCAA Championships, 7 All-American Honors, and 57 individual points: second-most only behind Missy Franklin at the NCAA Championships in Greensboro.

The result will be an uphill battle for the Cardinal toward a possible 2016 title – though defending champions Cal lost two of the very small handful of counter-punches to Manuel, after Abbey Weitzeil deferred her freshman year and Missy Franklin turned pro following two years of college swimming.

As valuable as Manuel is for Stanford, she could be equally as important to Team USA’s success in long course at the Olympic Games. She finished the summer tied for 10th in the world in the 100 meter free (53.81), which made her the second-fastest American behind the aforementioned Franklin.

She was also the 8th-best 50 freestyler in the world, and the #1-ranked American. She swam both races at the World Championships in Kazan, Russia.

“This is a great decision for Simone,” said Meehan, who guided Stanford to a third-place finish at NCAA Championships in 2015. “Continuing her academics, training and social life here at Stanford allows for consistency over the next eight-plus months leading up to the Olympic Trials. Simone will still benefit from training in the team environment and our program will certainly benefit from her presence. Our lineup looks slightly different without Simone and sophomore All-American diver Kassidy Cook (also redshirting the 2015-16 season), but I’m excited about the opportunities for our team. So far, I’ve been really impressed with how they are taking advantage of these opportunities.”

Stanford began the season ranked 2nd in the initial 2015-2016 SwimSwam Power Rankings before news of Manuel’s redshirt. They should still contend for a spot on the overall podium, though, as each of the top three teams in that ranking (Cal, Georgia, and now Stanford) will be without their top sprinter this season.

Manuel has been named to the 2015 Duel in the Pool team, where the best Americans will take on a team of European All-Stars. In 2013, a high school Manuel was the hero, bringing home a tie-breaking mixed medley relay for a win and a 1-point American margin.

Big loss for Stanford. But this makes sense for Simone

She is still training with Stanford and is continuing her journey acsdemically. Does that mean she’s still enrolled at Stanford in classes? If so, what’s the point of red shirting then? Taking fewer classes maybe?

She’s still enrolled at Stanford. She just won’t compete with the team, and this year won’t count against her eligibility. The main benefit for her is that by not competing she won’t have to taper for NCAAs so she can save her taper for trials and the Olympics.

Going from a high energy conference meet (even if you aren’t rested) to NCAAs seems to wipe out a lot of athletes and understandably so. You end up resting/tapering for a good 4-6 weeks that can be used for training if you redshirt. That 4-6 weeks also falls in prime training time for trials which is in late June/early July.

She might be taking a lesser course load, but even if she’s not — there’s still a significant benefit from not having to travel/compete in numerous dual meets . . . and then go through a very taxing Pac-12 and NCAA championship cycle.

This is a very logical decision and great for Team USA. It’s just a little odd that she waited until October to make this announcement.

No restriction on hours for training, travel to LCM meets (internationally, pro series) as a NT member when wanted/needed. I don’t believe in the taper comments, since she is a 50/100 specialist, I would think that would be the least of her concerns. Her course load maybe front loaded this semester and lighter next semester (below 12 credit threshold) to help with staying on track for graduation and eligible.