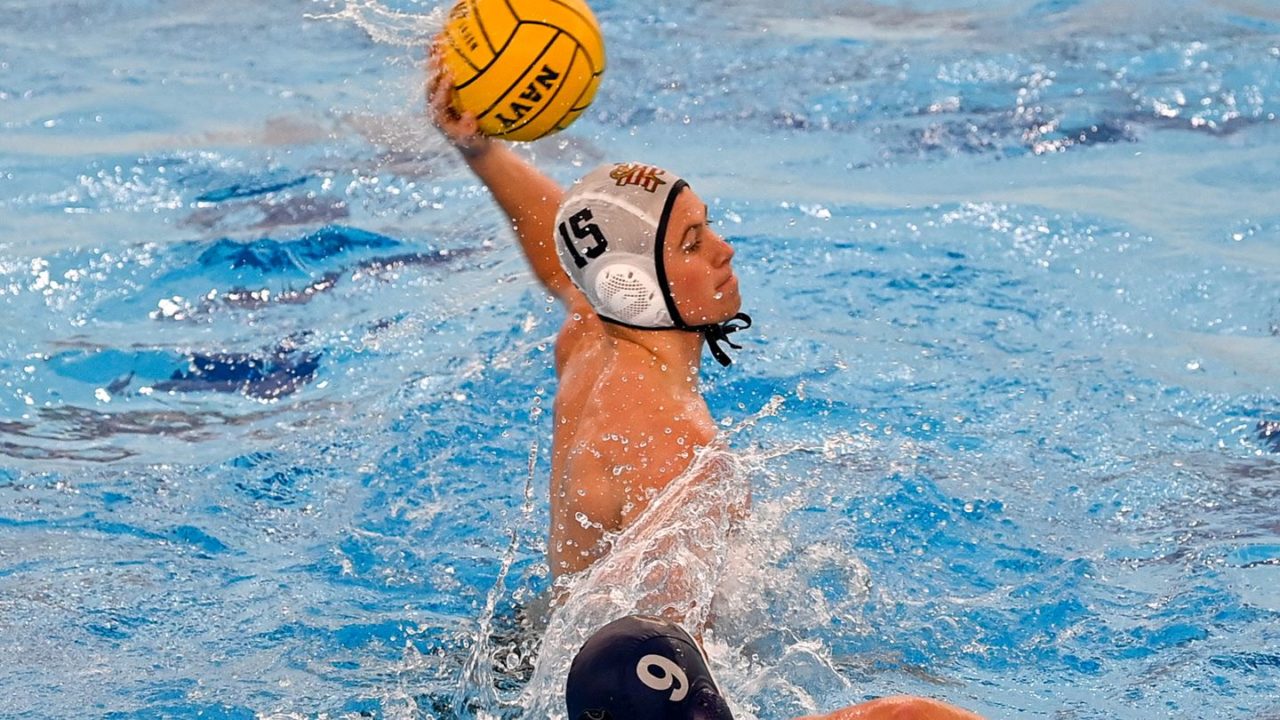 The Midshipmen defeated La Salle, 14-5, and Iona, 19-6, finishing the weekend 3-1 after splitting a doubleheader with Bucknell on Saturday. Current photo via Navy Sports

The University of Southern California holds onto the position as the No. 1 team in the nation by three points in the Week 4 Women’s Varsity Top 25 Poll.

The University of California stays in front of the field for another week as the Golden Bears top the Week 6/March 3 National Men’s Varsity Top 10 Poll.

PHILADELPHIA, Pa. – The #9 Navy water polo team (4-1) posted a pair of victories on Sunday at Kirk Pool in Philadelphia. The Mids opened the day with a 14-5 win over host La Salle (0-1) before ending the day with a 19-6 victory over Iona (0-2). The Midshipmen finished the weekend 3-1 after splitting a doubleheader with #10 Bucknell on Saturday.

“Today was a good day,” head coach Luis Nicolao said. “A lot of guys were able to have success offensively today. With all the goals we scored, one thing that I think may get lost is how well our defense did. Max and Caden did an outstanding job at goal for us and our team defense was able to hold down both La Salle and Iona. We are thankful to be able to compete and lucky to come away with a pair of victories today. It was a great weekend for us.”

Max Sandberg (Newport Beach, Calif.) and Caden Capobianco (Laguna Beach, Calif.) split the goalkeeping duties on the day. Sandberg earned the start against the Explorers, finishing with 15 saves and a steal with only five goals allowed. Against the Gaels, Capobianco lined up between the pipes. The freshman registered eight saves to go along with three assists.

In the first quarter, Navy took an early lead less than a minute into the game on a Berzins goal off a Lee assist. Following a thirty-minute delay as officials and staff worked to correct an issue with the shot clock, the Mids returned to action with a goal by Hayden Kahn (San Clemente, Calif.) to extend the lead to 2-0. La Salle countered with a goal to trim the Navy lead to just one. In the second quarter, the Explorers knotted the score at 2-2, but Lee answered with a goal to put the Midshipmen back in front. Salinas extended the advantage to 4-2, a lead the Mids would take into halftime.

In the second half, Berzins pushed the Navy’s lead to three with his second goal of the game. Following a La Salle goal, Navy used goals by Lee and Peter Hillen (Orinda, Calif.) to give the Mids a 7-3 lead. The Explorers netted a goal, but Lee closed out the third quarter with his third goal of the game, giving the senior captain a hat trick. In the fourth quarter, the Midshipmen took control of the game, outscoring the Explorers 6-1 in the final period. Cole Jacobs (Naperville, Ill.) scored a goal, while Salinas added in a pair of scores. Corpuz netted three in a row for the hat trick and to give Navy a 14-4 advantage. La Salle scored a goal to provide the final margin of 14-5.

Game 2 Recap: Navy 19, Iona 6
In the second game of the day, Navy took the lead in the first quarter and never looked back, posting a 19-6 victory. Clark and Salinas each registered hat tricks in the game, while Bobby Wall (San Mateo, Calif.) and Altmayer chipped in two scores apiece.

Despite a goal by Salinas, the Gaels took an early 2-1 advantage in the first quarter. The Midshipmen responded with three straight goals to take a 4-2 lead after one quarter. Salinas netted his second goal of the game to tie the score, while Payton Comstock (Clarendon Hills, Ill.) gave Navy the lead. Altmayer scored his first goal of the game to put the Mids up by a pair. In the second quarter, Lee netted a pair of goals around an Iona score to give Navy a 6-3 advantage. Jacobs extended the advantage to four goals before Salinas converted his third goal of the game for his second hat trick of the day. Navy closed out the half with a goal by Clark to go into intermission with a 9-3 lead.

In the second half, Navy extended its advantage, outscoring Iona, 10-3. Salinas scored his fourth goal of the game, while Clark netted two goals to compete his hat trick. Altmayer added his second score, while Wall found the back of the net twice in the fourth quarter. In addition, Ivan Pang (El Monte, Calif.), Connor Simpson (San Rafael, Calif.), Berzins, and Nelligan each scored goals in the second half.