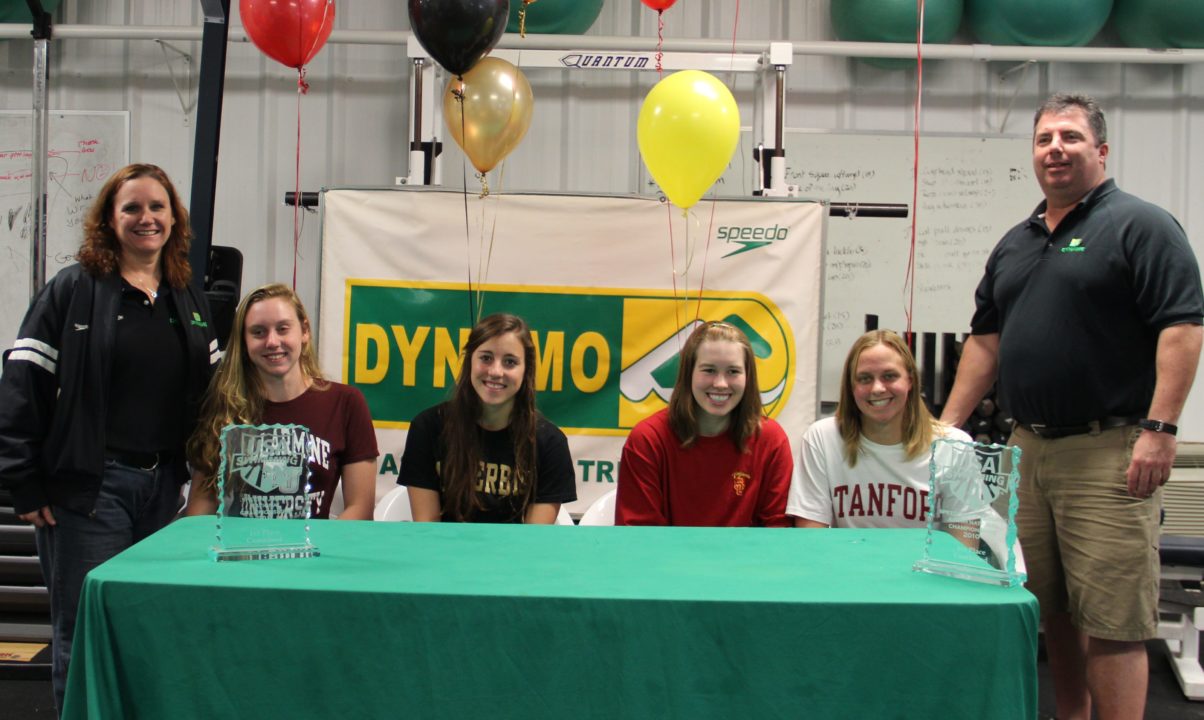 About Dynamo signees:
Seven Dynamo athletes signed national letters of intent (NLI) to swim during the early signing period, November 14 – 21, 2012. Their dedication and diligence in both the pool and the classroom during their high school careers has afforded them the opportunity to become collegiate athletes. In the fall of 2013, each of these athletes will continue their academic and athletic pursuits at top universities across the country.

Jamie Christy, a student at The Westminster Schools, will attend the University of Southern California, currently ranked as the number one women’s swimming program in the country. The future Trojan represented Dynamo at the USA Olympic Team Trials in 2012, as well as being part of two USA Swimming Junior National Championship Teams with Dynamo. Christy is a veteran competitor of numerous National, Junior National, and Grand Prix meets, a Junior National finalist, a 3-time All-American, and a USA Swimming Scholastic All-American.

Samatha Kase, a senior at Chattahoochee High School, has committed to the Georgia Institute of Technology. Following her brother and fellow Dynamo alumni Dylan (’15) to Georgia Tech, Samantha is a butterfly specialist, placing fourth at the Speedo Championship Series Meet in July of 2012.

Rachel Koch, a senior at the Wesleyan School, has committed to Vanderbilt University. Rachel is a Junior National qualifier in butterfly has been a finalist in both long course and short course Georgia State Championship meets since her freshman year, and is a USA Swimming Scholastic All-American.

Evan Pinion, a student at the Westridge Christian Academy program, will attend the University of Tennessee. A native of Knoxville, Evan is a USA Swimming Junior National Champion, as well a member of the last three USA Swimming National Junior Teams, having represented the US at meets in Peru, Hawaii, and Europe. Evan placed 10th at the 2012 US Olympic Team Trials in the 1500 Meter Freestyle.

Shawn Pyne, who currently attends Dunwoody High School, will attend Bellarmine University (KY). Shawn is a freestyle and backstroke specialist who has represented Dynamo at the past 3 Georgia Senior State Championships.

Alan Rabstejnek, a senior at Chattahoochee High School, has committed to Auburn University. A Scholastic All-American, Alan is a Junior National finalist who will look to grow his speed and power with the perennial powerhouse Tiger program.

Nicole Stafford is also a student at The Westminster Schools and will attend Stanford University, home to numerous NCAA Champions and Olympians. Nicole is a USA Olympic Trials qualifier in an impressive 6 events, as well as a 10-time Georgia State Champion, Junior National finalist, 10-time All-American, and a USA Swimming Scholastic All-American. Nicole is also a veteran of Dynamo’s USA Swimming Junior National Championship Teams in 2010 and 2011.

Where is the Connor Jaeger photo vault?