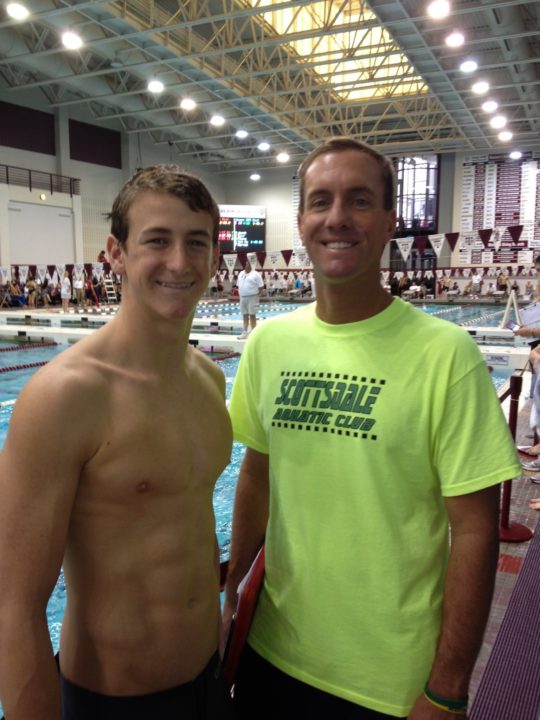 Ryan Hoffer, seen at the Gulf Swimming Senior Championship meet in December where he broke his last record.

The 2013 Speedo Champions Series meet in Federal Way, Washington is host to a lot of very impressive senior-level swimmers this weekend. That includes names like Tyler Messerschmidt, a Cal All-American who is taking a leave from the team this season; and what is likely the last yards meet for Missy Franklin before she gets to Cal.

The first headline, however, goes to an age grouper: 14-year old Ryan Hoffer from the Scottsdale Aquatic Club. He took the 7th seed in prelims of the 100 free with a 45.11, which is a new National Age Group Record. It breaks the 45.21 set by Edward Kim of Bellevue Aquatics in 2010 in this same pool, in fact.

Hoffer already holds the 50 record for 13-14’s with a 20.45 late last year. Just a few lanes over in the final, Messerschmidt will be a good target for Hoffer to watch: he’s a fellow Arizonan and a former age group star himself.

Other notable swims include a 2:00.27 200 breaststroke from Current Swimming’s Thomas Brewer. That’s a best time for him by a full second, and he’s only 16.

Full results for this meet, which runs through Sunday, can be seen here.

Messerschmitt has to get those grades back up. Cal could have really used him against Michigan coming up in a few weeks!

If Messerschmitt isn’t the most awesome racing last name ever, I don’t know what’s better.

Take a look at the results and look how Matt Rankin is doing with Phoenix Swim Club!!! It is incredible.

Um, no. The results are incredibly bad.

Yes, a whole THREE months and Rankin is a failure. I forget. Who was coaching Messerschmidt before college? Let it go already.