My Six Storylines for the 2012 Minneapolis Grand Prix 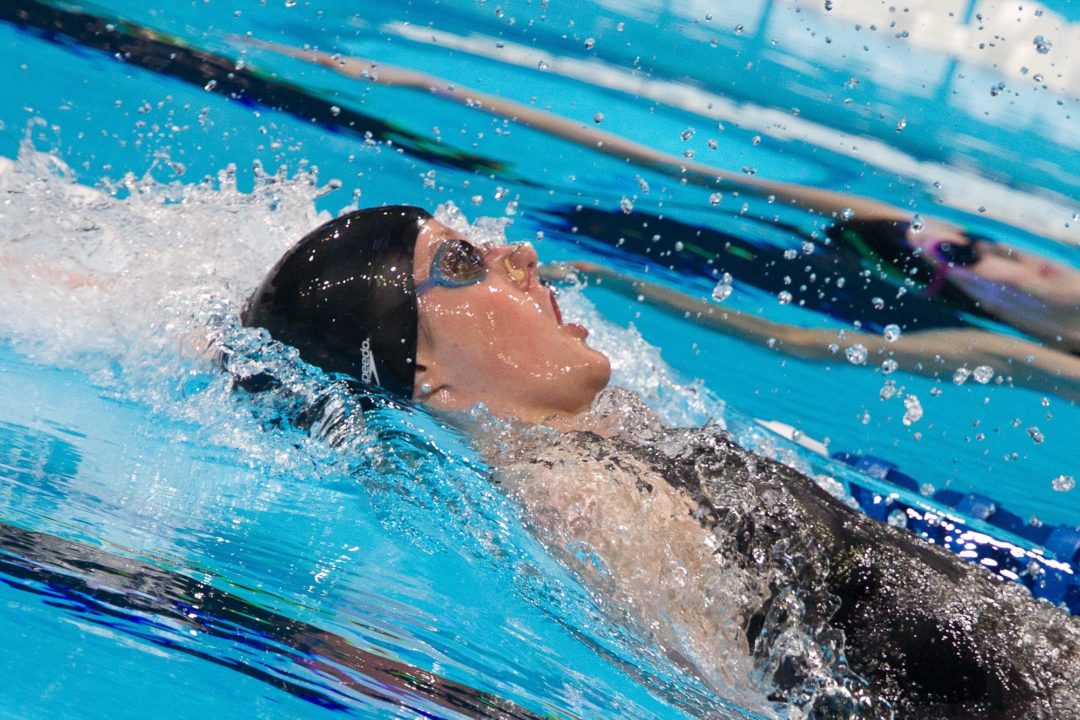 Missy Franklin was a star at last year's Minneapolis GP in long course, this year she'll get a crack in yards. (Photo Courtesy: ©Tim Binning/TheSwimPictures.com)

The 2012 Minneapolis Grand Prix is just hours away on the campus of the University of Minnesota, with action beginning Friday morning.

The psych sheets are out, and the first thing that jumps off the page is that USA Swimming seems to have been largely successful in their goal of really paring these events down to elite-level competitions, with the average event having between 45-65 entrants (as compared to typically well over 100 last year).

The headliners will be the Olympians like Missy Franklin, Ryan Lochte, Claire Donahue, and Jimmy Feigen, swimming in a yards course that we don’t often get to see them in, but there are some other under-the-radar participants.

That includes Carlos Almeida, a former NCAA Champion from Louisville in the 200 breaststroke, as well as Minnesota post-grad Jillian Tyler.

Of note, Minnesota seems to be the only college team in attendance at this Grand Prix. Usually, colleges take advantage of short course Grand Prix meets to at least get some good prelims-finals experience in, and at most for an NCAA qualifying meet. With so much uncertainty about qualifying times though, the Gophers won’t have any collegiate competition. That means that they will largely race themselves in relays.

Let’s check out some of the better highlights to watch in this meet.

1) Weltz vs. Almeida – 100/200 Breaststrokes – Have there ever been two more underrated breaststrokers than Almeida and Weltz? Weltz made the Olympic team last year, coming from nowhere, and people still don’t know who he is. Almeida won the NCAA Championship last year, and still most don’t know who he is. This, however, could be a fantastic matchup between the two. They won’t really have much competition in either race (and Weltz isn’t even seeded that high, because he got so good, so fast this long course season), but mid-pool in the evening, it could be a shootout. Edge to Almeida in yards.

2) Missy a Little Lighter Schedule – We’ve seen Missy Franklin take on some tough schedules at the Grand Prixs, but this year she’s only going after three: the 50, 100, and 200 freestyles, plus the 100 and 200 backstrokes. This will be a good chance to see what she can do in yards: even as a high school swimmer, we don’t get to see it much from her (she swam this meet last year, but it was long course as an Olympic precursor).

It’s going to surprise some people, but she’s not even the top seed in the 200 yard backstroke, despite holding both 200 meter World Records. That honor goes to Minnesota’s Tess Behrens in a 1:53.3. Katharine Anton, also a Gopher, is 2nd in 1:56.46, and then Franklin 3rd in 1:56.71. Given, however, that when Missy does swim yards meets it’s almost always high school, and the 200 back isn’t on the high school schedule, expect her to beat her seed-time. With Minnesota often using this as an early mid-season rest meet, though, Behrens could be up for the challenge. As good as she is, don’t expect Missy to totally run away from that field.

3) Ryan Lochte Brings a Full Boat – Ryan Lochte, on the other hand, is fully subscribed in this meet. It’s fairly typical for him to overenter the Grand Prixs and then trim his schedule back once he sees how things are going. He, like Phelps did in 2009, has sworn off the 400 IM, but is still entered in it for the Minnesota meet. Perhaps he decided that he could handle one in yards, since he’d do very little actual swimming, but more-likely that becomes a scratch too. Keep an eye on if he chooses to swim the 100/200 fly over the 100/200 back. He’s alluded that he might give the butterfly events a real go in the next year (he swam the 100 fly at Trials).

4) Women’s 200 Breast – I almost feel guilty that I’m so excited about this race (I don’t know if anyone else will be), but the storylines are thick. Two of the best ever in yards, Jillian Tyler and Haley Spencer, both Minnesota gophers, are the top two seeds. Former Wisconsin rival , and National Teamer, of their’s Ashley Wanland is also in the race. Minnesota freshman Kierra Smith is swimming what will likely be her first serious yards race (she’s a star with a 2:25 in long course). That sets up a battle of two podium-contenders in the 200 for this year’s NCAA Championship meet, plus a showdown of two contenders for spots on Canada’s World Championship team. It goes even deeper than that – How about three 13-year olds seeded in the top 18, and all of them are from Nebraska. I bet most of us (coacherik, stay out of this) would be lucky to use up all of our fingers counting the number of swimmers we could name who came out of Nebraska’s age group ranks, but their tide seems to be rolling. There’s not a whole lot of depth in the event, but there’s some good internal battles going on.

5) Isabella Rongione, Now 13 – there has been a lot of talk about Isabella Rongione from the Fish swim team in the Potomac Valley on SwimSwam the last few days. The young swimmer who just mauled the 11-12 distance record books over the summer (8:55 and 16:48 in the 800 and 1500, respectively – 2 and 7 seconds better than Becca Mann’s old records). While she’s unlikely to break any records at the bottom-end of the age group, she’ll have the opportunity for some good swims in the midst of quality competition. That will include swimmers like Ashley Steenvoorden, Chloe Sutton, and 14-year old Becca Mann, whose records Rongione knocked off over the summer.

6) Conor Dwyer, Redemption – In 2011, former Florida Gator, and current Gator Swim Club Olympian, Conor Dwyer was tracking toward possibly having one of the great NCAA Championship performances of all time. Then he became very ill, and it ended up being astonishing that he even swam as well as he did. He’s only swum one yards meet since then, and it was one in which he was clearly exhausted, so it could be fun to see him pop a few yards times that we never got to see in 2011. Gregg Troy is usually crushing his swimmers by this point of the year, but based on the one Gator Olympian we’ve seen already (Elizabeth Beisel), he may be giving them a slight post-Olympic reprieve.

Almeida is poised and ready…so is his fellow Cardinal and Portuguese teammate Pedro Oliveira…both swam in London and both are swimmers to watch this weekend and beyond!!

Conor Dwyer did not travel to the meet.

Happy to watch again some of my favorite swimmers in the water even if it’s a little late in the night for me. I hope the live webcast will work well.
Happy you have noticed like me in the races to watch the women’s distance freestyle. Ashley Steenvoorden vs Chloe Sutton vs Becca Mann vs Isabella Rongione is very interesting. I don’t know the level of shape of all these swimmers but if I had a bet to make I would pick Becca Mann for many wins this weekend.