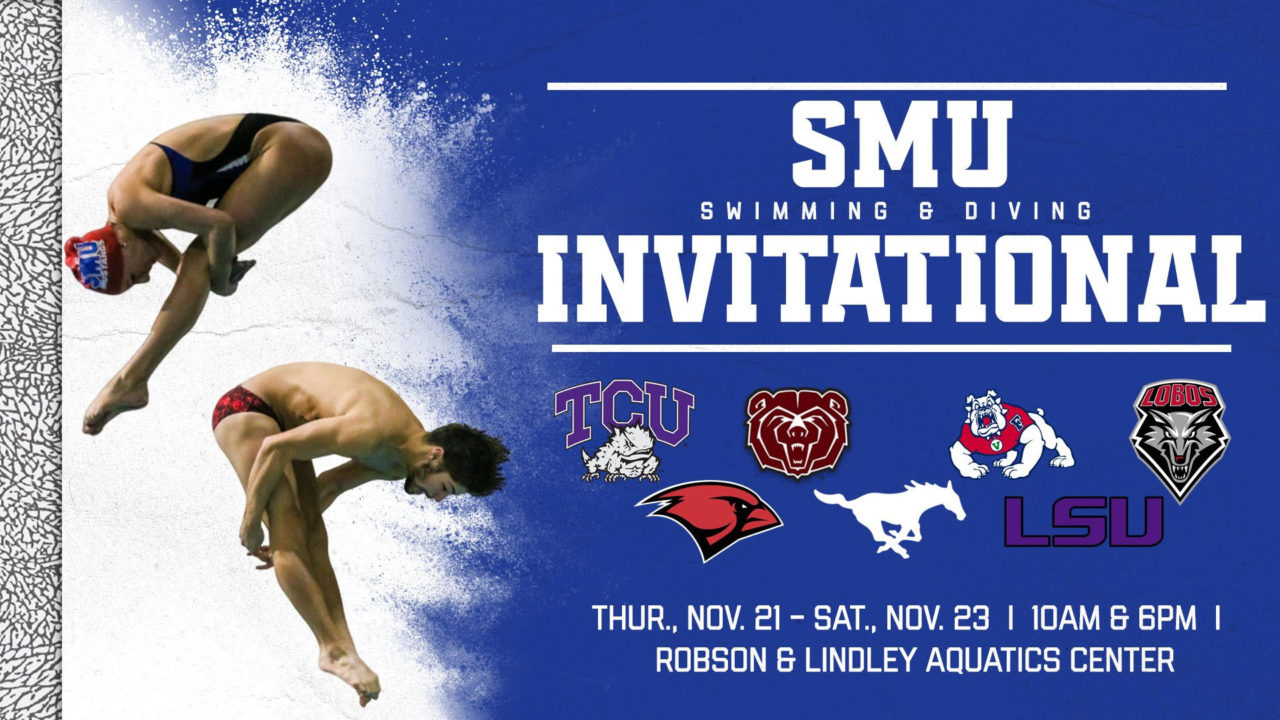 Preliminary action begins at 10 a.m. each day, with finals starting at 6 p.m. Live video and results will be available at SMUMustangs.com free of charge, while results can also be found on the Meet Mobile App for a fee.

*all relays are finals only

Event Format
Evening finals will feature four heats (two Bonus, Consolation and Championship) of each individual event, with the top 16 individual places scoring. The 1,650 free will be a timed final. In relay events, teams may enter an unlimited number of relays; however, only the top two relays from each team will score.

For their performance against LSU, Petar Bozhilov and Parker Hardigree swept American Athletic Conference awards. Bozhilov led SMU in distance freestyle events, winning both the 500- and 1,000-yard freestyles against the Tigers, while Hardigree won 3 meter with a career-best, NCAA Zone qualifying score. He was also second on 1 meter at the event, posting a career mark.

The Mustangs have posted 16 times this season that rank them in the top eight of individual events in The American, while Matan Segal, Colin Feehery, Ralph Koo and Daniel Forndal currently have the league’s fastest 400-yard medley relay time at 3:20.76.

In diving action, Hardigree and Peter Smithson lead the Mustangs, trading victories this season. Hardigree, who was the 2019 AAC Most Outstanding Diver, has already surpassed his career marks from a season ago and posted NCAA Zone qualifying scores on both springboards, while Smithson has a qualifying mark on 1 meter.

Senior Erin Trahan leads the Mustangs this season after posting an NCAA B cut in the 100-yard butterfly at the SMU Classic. Trahan was named the American Athletic Conference Swimmer of the Week for posting the nation’s 11th fastest time in the event early in the season, and continues to hold The American’s fastest times in both the 100 and 200 fly.

Senior Felicia Anderson is the AAC swimmer to beat in both backstroke distances after transferring to the Hilltop this season, and Gabi Grobler holds the top spot in the AAC in the 200-yard individual medley.

Freshman Nicole Stambo has won 1 meter in each of SMU’s dual meets this season for the Mustang divers and has achieved the NCAA Zone qualifying score. Katie Crown is the only Mustang to have achieved a Zone qualifying score on each springboard, while Taylor Ohlhauser (1 meter) and Johanna Holloway (3 meter) round out the group to have every Mustang qualified for the Zone D Championships to be held at SMU’s home facility in March.