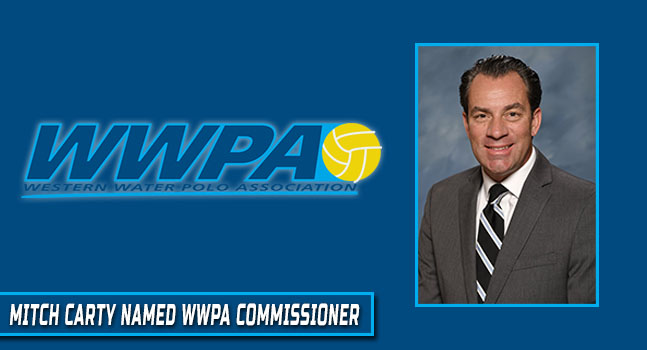 Carty has also been the WWPA's Director of Officials since 2016 - a role he will continue while transitioning to commissioner this month. Current photo via WWPA

OAKLAND, Calif. – The Western Water Polo Association (WWPA) is pleased to announce Mitch Carty as its new Commissioner following a national search. Carty, who presided as President of the WWPA men’s conference from 1998-2002, has also been as the WWPA’s Director of Officials since 2016 – a role he will continue while transitioning to commissioner this month.

He put together a decorated career as the head coach at Whittier College, where he was inducted into the Poets’ Hall of Fame as a dual-sport athlete in water polo and golf; as a USA Water Polo Referee (Level 4 of 5), he’s officiated multiple NCAA tournament games and several conference championships; as an administrator, he served six years as instructional and senior chair for the Southern California Aquatics Federation (SCAF); and he is in his 13th year as Chief Financial Officer for the California Interscholastic Federation, Southern Section (CIF-SS).

“I’m honored to be selected as the WWPA’s next Commissioner and am grateful for the opportunity to serve the conference in a new role,” said Carty. “Having been an athlete, coach, official and administrator of the WWPA over the past 25 years, I feel I possess the skills and experience to bridge, communicate and grow with all stakeholders. Our goal for the conference will be to maintain and build our level of competitiveness in the NCAA and strive for the growth and stability of member institutions within the conference.”

During his time as the WWPA’s Director of Officials, Carty has coordinated all conference assignments for the men and women for the last five years. He is responsible for evaluating game officials and collaborating with the conference coaches to ensure accuracy of scheduling, the quality of officials, and the safety of participation.

“We are thrilled to have Mitch take over as Commissioner for the WWPA. His extensive experience in collegiate water polo and familiarity with our conference, along with his strong financial skill set, have set him apart as the ideal candidate to lead the WWPA,” said UC Davis Senior Associate Athletic Director Josh Flushman, head of the WWPA search committee.

Carty succeeds former commissioner Steve Doten, who was at the WWPA helm for nearly 4 years.