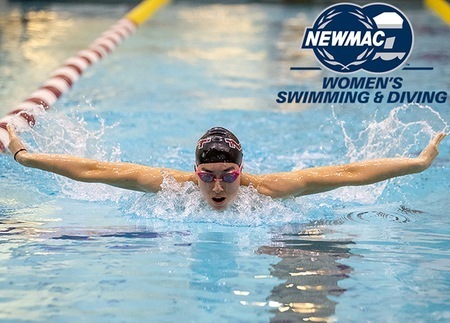 The MIT women's swimming and diving team rewrote its own record from a season ago with 19 student-athletes listed on the 2019 New England Women's and Men's Athletic Conference (NEWMAC) Academic All-Conference team. Current photo via MIT Athletics

Westwood, Mass.  – The MIT women’s swimming and diving team rewrote its own record from a season ago with 19 student-athletes listed on the 2019 New England Women’s and Men’s Athletic Conference (NEWMAC) Academic All-Conference team this season. Not only was the 19 student-athletes a new program record, but it led the NEWMAC this year.

The NEWMAC saw 99 women’s swimming and diving student-athletes from across the league earn Academic All-Conference accolades this season. Honorees must have met the following criteria: earned a minimum cumulative GPA of 3.5/4.0 scale or 4.35/5.0 scale after the 2018 fall semester, achieved second year academic status at his institution, and been a member of the varsity team for the entire season.

The No. 7 Engineers are gearing up for the upcoming NEWMAC Championship which will take place at WPI from February 21-24, 2019.