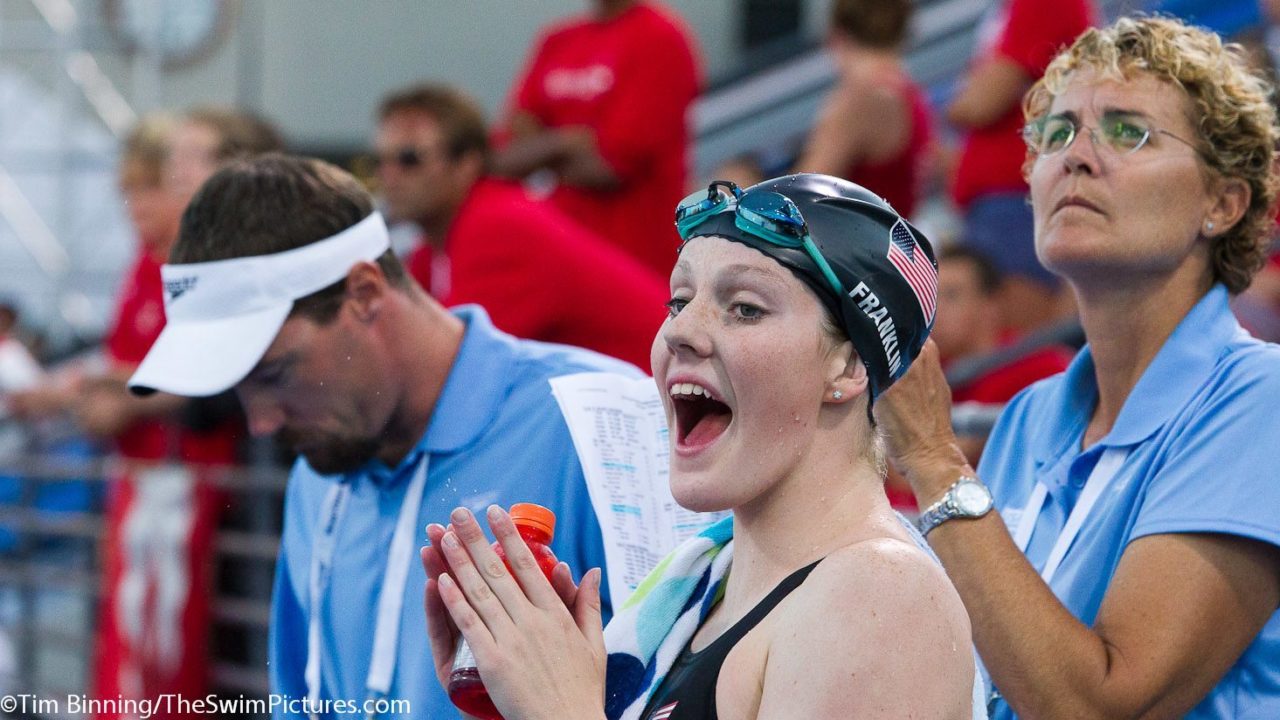 Missy Franklin is all about "team," not records, at this weekend's Colorado State Championship meet. (File Photo from 2010 Pan Pacs courtesy: ©Tim Binning/TheSwimPictures.com)

There are three individual events on the high school schedule that high school superstar Missy Franklin swam in London in 2012: the 100 free, the 200 free and the 100 backstroke. When she represents Regis Jesuit High School in Fort Collins, she won’t swim either of those races.

Instead, she’s opting to race the 200 IM and the 500 free, according to psych sheets that were released today. No names were listed under relays, so we still can’t be certain about which two relays she’ll add to that schedule.

Franklin had a chance at breaking the all-time high school records in both the 100 back and 200 free, but as she has made clear all season, she’s not swimming for the records or the individual glory. This season is all about the team for her. She will still have a chance at breaking records in those two races, because she’s so good even in these off events. The most likely to go down is the 1:57.41 held by her good friend, and Olympic teammate Kathleen Hersey that is the independent school record in the 200 IM. Franklin was a 1:55.3 in the 200 yard IM in 2010, when she was only 15, so Knutson’s overall record is in danger as well.

Brooke Hansen from Loveland (2:05.84) and Shelley Drozda (2:05.86) from Mountain Range will be the two to push her in that IM. Both are sophomores, and with that youth and Drozda’s speed in the backstroke especially (she’s the top seed), Franklin could have at least a little push early on. Hansen is primarily a breaststroker.

Franklin will likely be the swimmer of the meet, but based on a quick glance of the psych sheets, Fossil Ridge will be the favorites to take the team title again. Last year, their win was a surprise and a bit of an upset; this year the team is clearly stacked, with senior sprinter Rhianna Williams, who is the top seed in the 50 (23.35) and 100 (51.24) freestyles.

Is metros psych sheet out yet?

Where is psych sheet?

Incredible girl she is!!! I wonder how rested she will be…if she is decently rested maybe a 1:55 and a 4:43? Very interested to see how she does in these off events!!!

Missy was in Berkeley last weekend with her family attending the Cal meets. The whiny abuse she’s taken for wanting to swim one last time with her friends is ridiculous, That being sad, she’s walked the walk on putting her team ahead of individual accomplishment. It’s unfortunate that she won’t get the national high school records she deserves, but she’s also got bigger fish to fry. Her selflessness bodes well for Cal’s team success is 2014 and 2015.