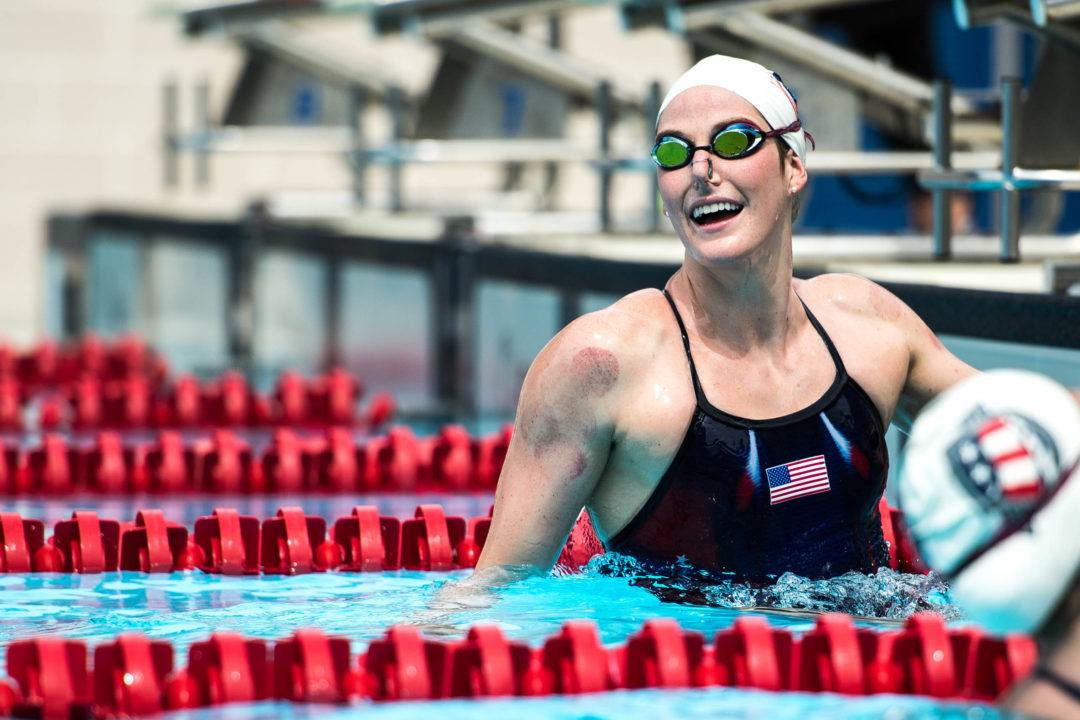 Taking another step along her journey to recapture her 17-year-old self’s love of swimming, Olympic gold medalist Missy Franklin is making the move to Georgia. Archive photo via Mike Lewis/Ola Vista Photography

Taking another step along the journey to recapture her 17-year-old self’s love of swimming, Olympic gold medalist Missy Franklin is making the move to Georgia. Relocating to Athens and training under storied coach Jack Bauerle, Franklin is pursuing a degree is psychology amid her quest to kickstart her swimming career that has since cooled from her world record-setting days of London 2012.

The 22-year-old originally from Colorado had been training under Cal men’s coach Dave Durden, but wanted to reconnect with Bauerle, who coached Franklin back when she made her first national team at the age of 13.

Of the Georgia coach, Franklin told the Associated Press this week, “I’ve always adored him,” she said. “He cares about you.” (newser.com)

“I really struggled with that for a while because I looked at it from a selfish perspective,” said the athlete. “It really isn’t a selfish decision. I started thinking about the road I have ahead of me. I started looking at options, which is really big for me.”

Georgia’s stellar squad already boasts powerhouse national teamers Chase Kalisz, Melanie Margalis and Olivia Smoliga, all of whom Franklin has competed with for USA. Surrounded by teammates whom Franklin describes as ‘welcoming and accepting’, the backstroke and freestyle ace hopes to finally charge forward to Tokyo 2020 after a pair of shoulder surgeries which resulted in her missing last year’s World Championships.

“I’m kind of coming back from the bottom,” she said. “I could feel pressure because people are expecting a comeback, but I don’t care. I don’t really care what kind of pressure people are putting on me because I can’t control that.

“I want to get back to that 17-year-old who truly loved the sport,” she said. “It’s less about the hardware I bring back and more about getting back there and showing people the Missy that is so happy.”

Franklin is hitting both the pool and the weights, primarily targeting the U.S. National meet later this summer.

Her best shot at a senior international team is 4×200 relay for sure. It’ll be interesting to see what level she’s really at as we have nothing to go on with how fast she’s able to swim right now.

If I could dislike this a million times I would.

Why? They take six swimmers for the relays so of course it’s her easiest path onto the team. She just needs a 1:57 low. Actually the 2 back isn’t that strong either so maybe that is another possibilty

Yeah in all honesty I don’t understand the hate associated with Bob’s comment here. I mean, it’s one of only 2 events she made the team on back at 2016 trials. 2nd in the 200 back and 2nd in the 200 free. And since there are 6 slots open for the 4×200 free relay it is clearly her “best shot”. It’s not an insult, it’s just an opinion somebody formed which can arguably be supported by numbers…if we were taking bets on an event she would make it in where would you guys put your money for a 25 year old swimmer coming off of back injuries from previous years?

Just to clarify, I’m not saying I don’t want her to succeed in other events. I’d love to see her get back in form and make the backs, 200 free individually etc. I’m just saying her most likely route is 4×200, because, well, statistically it’s easier when they take 6 swimmers instead of 2.

Did she finish her Psychology degree at Cal?

Hope she finds success both personally and professionally at Georgia