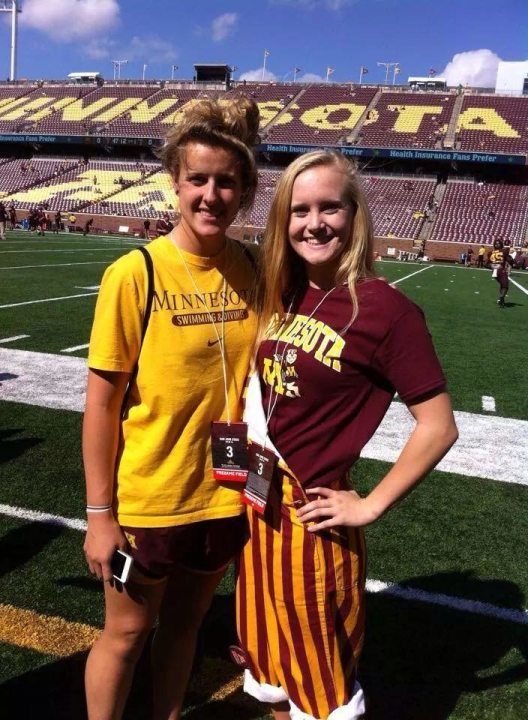 Senior Katie Anton and Erin Buck pose on the football field at the University of Minnesota.

The Minnesota Golden Gophers have earned a verbal from their third different recruit who was on their trip over the weekend and their 4th in the last three days.

Like two of the other three newest additions, Erin Buck is a native Minnesotan from the best women’s class the state has produced in recent memory. Buck is primarily a backstroker, with yards bests of 56.24 and 2:02.82 in the 100 and 200, respectively.

She holds Winter Nationals time standards in the 100 back from her best time both in yards, above, and meters, which is 1:04.82.

She trains collegiately with the Minnetonka Swim Club, which includes at least 6 former Minnesota swimmers on its coaching staff. That includes recent Minnesota post-grad swimmers and former All-Americans Ashley Steenvoorden and Haley Spencer (Steenvorden has recently retired, according to swimmers at Minnesota).

Two current members of the Minnesota men’s team also hail from Minnetonka: Bryce Boston and Noah Busch. Lexi Tenenbaum, a Minnesota diver, was a former high school teammate of Buck’s at Maple Grove High School, so the connections to this program are numerous.

Prior to a relatively-recent joining of the Minnetonka Swim Club, Buck represented the New Hope Crystal Plymouth Swim Club.

The other three swimmers to commit this week to Minnesota are Chantal Nack, Kaia Grobe, and Maggie Werba.