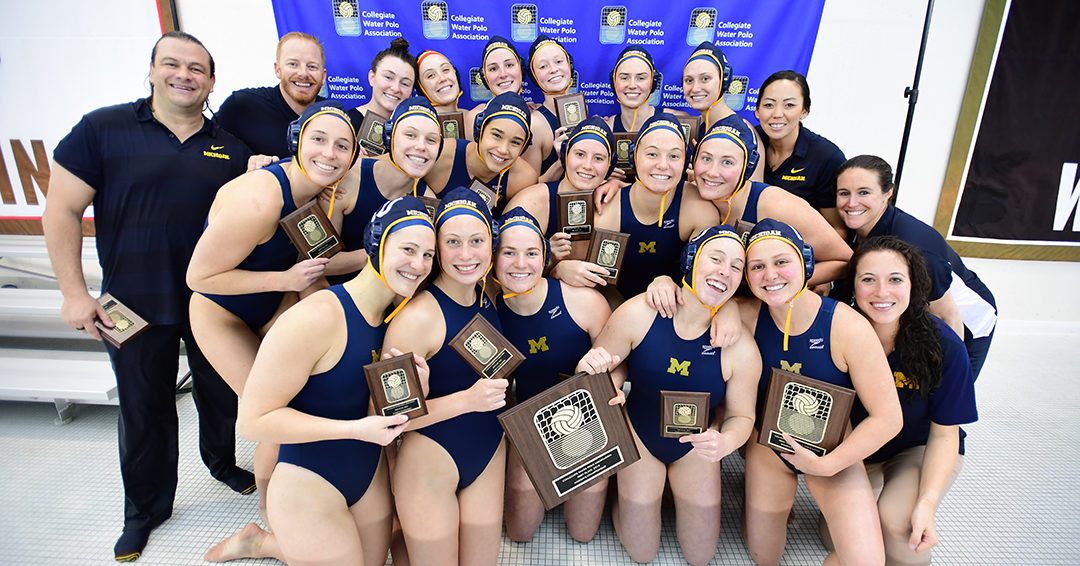 The 6th-ranked University of Michigan water polo team defeated No. 15 Princeton, 10-6, on Sunday in the CWPA Championship game for the third straight year to earn its fourth straight title and the ninth in program history. Current photo via CWPA

PROVIDENCE, R.I. — The No. 6-ranked University of Michigan water polo team defeated No. 15 Princeton, 10-6, on Sunday (April 28) in the CWPA Championship game for the third straight year to earn its fourth straight title and the ninth in program history.

The Wolverines jumped out to a 2-0 lead in the first quarter and poured in four goals in the opening frame to start with a comfortable 4-1 lead after eight minutes. Sellers scored two of the team’s four first-quarter goals.

After the quick offensive start, it was the U-M defense that carried the Wolverines. Junior Heidi Ritner made six saves and her defense in front of her had eight steals and seven field blocks. Four of those field blocks came from sophomore Kathy Rogers, who also scored two goals to go along with two steals off the bench.

The defense held Princeton to just three goals through three quarters as the Wolverines extended the lead to six goals at 9-3. After the Tigers cut the lead to four goals with 4:08 remaining, Steere scored her second of the game to make it 10-5.

U-M ran out the clock on its final possessions and as time expired players both on the bench and in the pool celebrated a fourth consecutive win.

The 2019 Michigan senior class becomes the first in program history to win four consecutive championships. Kim Johnson and Julia Sellers have played in all 147 games over the last four seasons, with each season featuring a Sunday victory at the end of April and a celebration that includes a plunge into the pool with their teammates and a singing of “The Victors.”

Sellers was named the CWPA Tournament MVP after scoring three goals for the second straight game in the tournament. She also had one assist to give her 100 career assists and drew two exclusions with her tremendous counter attacks.

Freshman Abby Andrews was tabbed the CWPA Rookie of the Tournament after recording two goals and four assists. She finished the weekend with five goals and eight assists in the two games and now has 126 points on the season. Andrews also had four steals in the contest.

Four Wolverines were named to the CWPA All-Tournament first team. Sellers and Andrews were joined by Ritner and junior Maddy Steere.

Michigan earns an automatic bid to the NCAA Tournament for the fourth straight season by winning the conference championship. U-M will find out its NCAA opponent during the NCAA Selection Show, which will be streamed live on NCAA.com at 8 p.m. on Monday night (April 29).

PROVIDENCE, R.I – The No. 6 Michigan Wolverines won their fourth straight Collegiate Water Polo Association (CWPA) title with a 10-6 victory over the No. 15 Princeton Tigers in the CWPA Championship Game at the Kathrine Moran Coleman Aquatics Center on Sunday afternoon.

The Wolverines started off quickly with the first two goals and poured it on with two more tallies to end the quarter, taking a 4-1 margin into the second stanza. Princeton closed within three, but trailed 6-2 at halftime.

Michigan registered with two straight tallies to open the second half to push its advantage to six. The Wolverines led, 9-3, after 24 minutes. Goals from Amy Castellano and Laura Larkin cut Princeton’s deficit to four, but the Tigers couldn’t get closer in the loss.

With nine goals in the tournament, Lindsey Kelleher was named to the CWPA Championships All-Tournament First Team. Marissa Webb, Amy Castellano, Maddie Pendolino and Eliza Britt earned second team honors. Derek Ellingson was selected as the Coach of the Tournament.

Princeton finishes the season at 21-9 overall, marking the third straight season that the program has won at least 20 games.