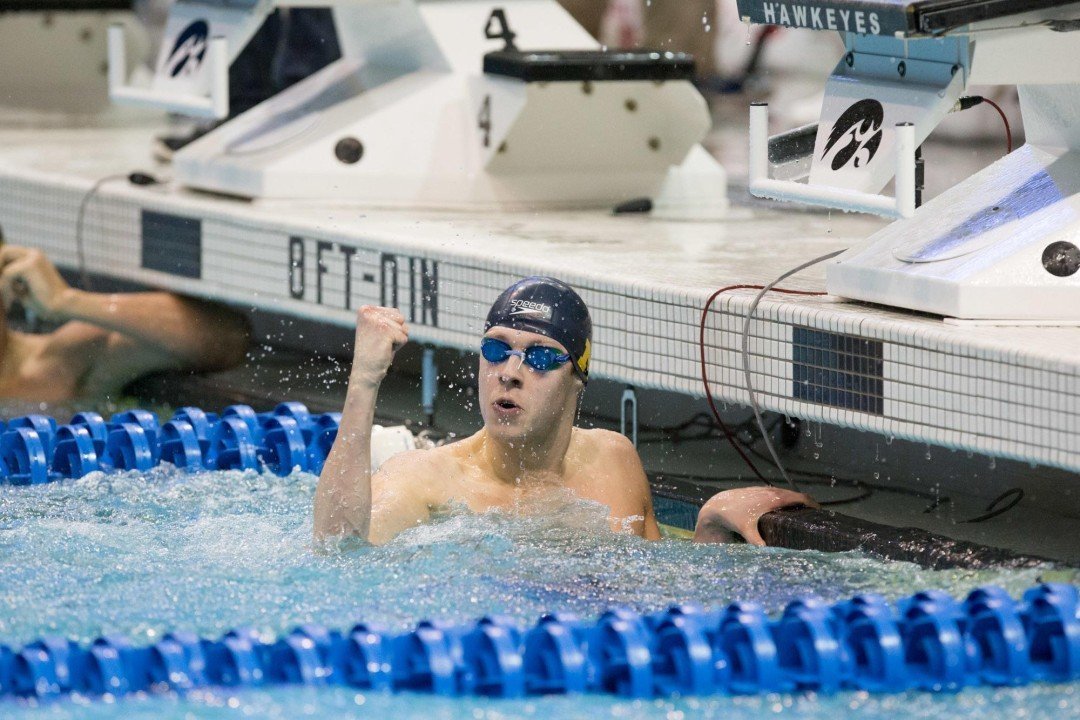 Anders Nielsen helped lead the Michigan men to a dominant victory against Virginia and Penn State this weekend in Ann Arbor. Archive photo via Tim Binning/TheSwimPictures.com

The second day of the Michigan Tri Meet, as #5 Michigan men won easily against Penn State and Virginia, while the #20 Michigan women kept things close with #5 Virginia, but couldn’t come up with the win.

The Michigan men dominated today’s session from the beginning to end, extending their consecutive duel meet victory streak to 45 straight wins and consistently sweeping the top four times in most of the individual events.

The Wolverines began the day with a clear victory in the 200 medley relay.  Aaron Whitaker, Chris Klein, Jeremy Risky, and Paul Powers combined to win in 1:27.58.  Powers anchored with a 19.27, as he and Anders Nielsen (on Michigan’s “C” team) were the only two men to break 20 seconds on the anchor leg.  The winning Michigan team finished over two seconds ahead of their nearest competitors, the Virginia “A” team and an exhibition Michigan “B” team, both of whom touched in a time of 1:29.95.

Sophomore PJ Ransford won his first event of the meet with a 9:06.92 in the 1000 free.  Another sophomore, Paul Powers, won the 50 free in 19.75, just a tick slower than his lead-off time in the 200 free relay yesterday, and his second win of the meet after pacing the 100 free yesterday.   Senior Anders Nielsen won the 200 free with a 1:37.19, also his second win of the meet, to round out Michigan’s conquest of the freestyle events.  Tristan Sanders also joined the list of Michigan men with multiple wins this meet, as he completed his sweep of the backstrokes with a 48.94 to in the 100 back.

The only event that was even close was the 200 breast.  Michigan’s Klein held the lead through the first 100, slipped behind Virginia’s Yannick Kaeser  third leg, but came back on the final 50 to win 1:59.47 to 1:59.51.  Yesterday, Kaeser won the 100 breast to prevent a Michigan sweep of all the events.  We suggested in our preview of the Michigan men that Klein would probably need to step in to help fill the hole left by the departures of Richard Funk and Bruno Ortiz.  Last year Klein swam a 2:03.61 in the 200 breast at this same meet, and his relay splits were also faster this weekend then last year, so that is a promising note for Michigan and their relays.

The Michigan men closed the meet by winning the 400 free relay relay with the third-fastest time in the NCAA this season, as Powers, Jason Chen, White, and Nielsen touched first in 2:55.97, over five seconds ahead of the official second place finishers, Virginia’s “A” team, and over four seconds ahead of Michigan’s “B” team, which once again was swam as exhibition.

Final results for the men.

The women’s meet was much more evenly matched, at least in the battle between Virginia and Michigan.  Each of those two schools earned four victories today, while Penn State garnered their only victory (men or women) of the two day meet.

The 200 medley relay proved to be a preview of a great back-and-forth battle between the Cavaliers and the Wolverines today.  Michigan’s Ali Deloof out split Courtney Bartholomew 24.68 to 25.17 to give Michigan a lead they would hold through the first two legs, as Emily Kopas stayed ahead of Virginia’s Vivian Tafuto.  The Cavaliers pulled ahead on Ellen Thomas‘s 24.16 fly leg against Clary Smiddy‘s 24.80, and while Siobhan Haughey closed on Caitlin Cooper, she couldn’t quite make up the deficit, and Virginia won 1:40.15 to 1:40.36.

The Cavaliers went on to win three individual events.  Leah Smith won the 1000 free with a 9:42.23, which gives her the fastest time in the nation so far this season.  The previous best belonged to Georgia Bulldog Brittany McLean.  Kaitlyn Jones provided the other two Virginia victories, winning the 100 fly in 54.09 and the 400 IM in 4:15.41.

Haughey followed up yesterday’s double with a victory in the 200 free.  Her time of 1:46.31 gives her the third-fastest time in the country so far this season to add onto yesterday’s top-ranked times in the 200 IM and 100 free.

Penn State earned its only win of the meet in the 200 breast, where Melissa Rodriguez won with a time of 2:13.18 against a field that included Kopas, who finished won the B-final in this event at last season’s NCAA championships.

While Michigan would not be able to overcome Virginia’s lead in the team score, they did end the meet on a high note, posting the fastest time in the country in the 400 free relay.  Haughey, Smiddy, Gabby Deloof, and her sister Ali  combined for 3:18.30, swimming .01 faster than UNC’s time from Friday.

Final results for the women.