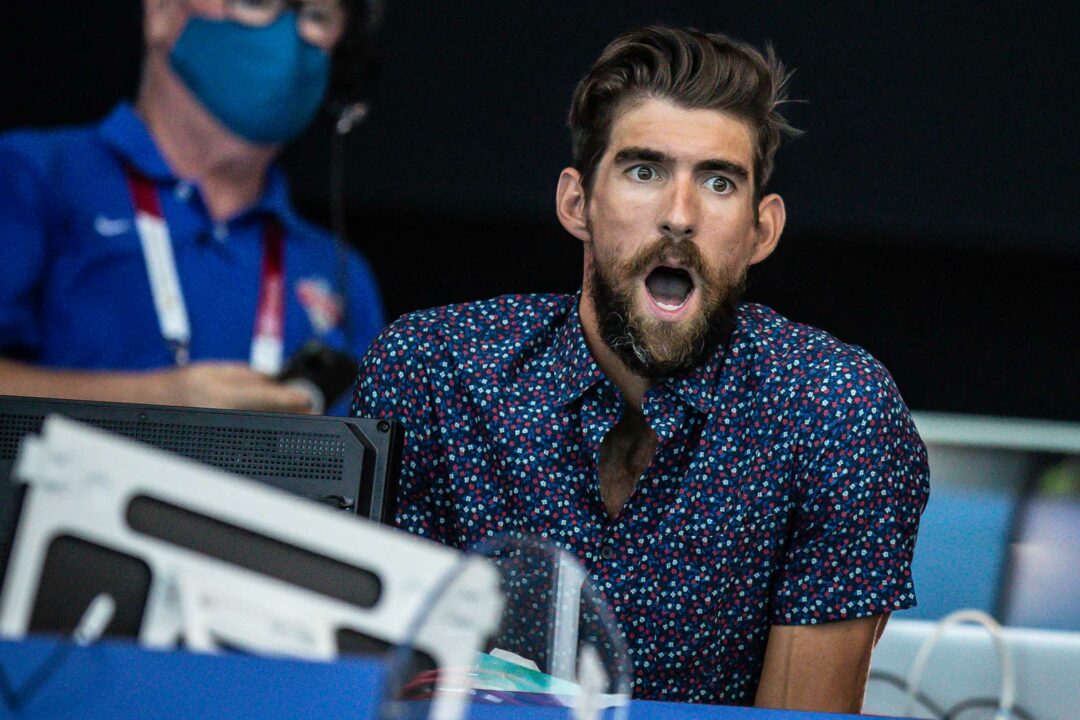 Michael Phelps already has World Records in swimming and golf, and he's not taking on a challenge in a new sport: pickleball. Archive photo via Jack Spitser/Spitser Photography

Later this month, the most decorated Olympian in history will add pickleball to his resume when he plays in a special celebrity match at the season kickoff Desert Ridge Open tournament as part of the Professional Pickleball Association Tour.

Besides winning a record 28 Olympic medals, 23 of which are gold, Phelps has achieved success in other sports as well. His 159-foot putt in 2012 is the longest putt ever made in a televised round of golf.

Now he’ll take to the pickleball courts where he’ll face off against future NFL Hall of Famer Larry Fitzgerald in a series of celebrity matches.

Pickleball is a paddle-and-net sport that is similar to tennis on a basic level, though it has more similarities to the sports of padel or paddle tennis. Opponents stand on the opposite side of a net and hit a ball back and forth using a paddle that’s bigger than a table tennis or ping-pong racket but smaller than a tennis racquet.

The court is less than half of the size of a tennis court, and the ball is a hard plastic whiffle ball, which encourages more fast-paced at the net play. A game that relies as heavily on strategy and finesse as much as power and athleticism, the sport features a “non-volley zone” that keeps athletes away from the net. This means that hitting the ball soft can be as effective as hitting the ball hard.

The Boston Globe last year said that pickleball is growing at an “almost unprecedented rate” and is billed as the fastest-growing sport in America.

While there are no signs of Phelps’ pickleball prowess on his social media channels, there is plenty of evidence that he has remained active in his retirement. That includes lots of posts him golfing, horseback riding, frequent posts about his fitness work, and even the occasional shadow of a swim.

Fitzgerald is also an avid golfer, but he likewise has not posted any indication of his pickleball skills.

This newly-announced event is part of a rapidly-evolving professional pickleball scene. The PPA Tour was founded in 2018, but recently received a major investment from billionaire Tom Dundon. Along with purchases of Pickleball Central, the sport’s biggest retailer, and PickleballTournaments.com, the sport’s biggest tournament platform, Dundon is pushing a lot of new money into the game in an evolution that feels similar to the inroads by billionaire Konstantin Grigorishin and his International Swimming League into the sport of swimming in the last few years.

Dundon is also the majority owner of the NHL’s Carolina Hurricanes and of the TopGolf company, which is a chain of entertainment-focused golf driving ranges.

What channel will the match be on?

Too bad they’re not playing SKWIM.

Is this televised nationally or on dish?

The tour’s pro matches are televised on Fox and Tennis Channel. Not sure if this match will be televised yet.

Pickleball doubles at the elite level is insane. The reflexes on those volleys….

Reasons to hate pickleball:
It’s loud!
It takes up valuable tennis court space!
Barely qualifies as exercise
Did I mention it’s loud?
There’s no net play
Hard to hit top spin
The balls aren’t made out of pickles

Pros:
Nobody grunts in pickleball

There’s no net play? In pickleball?

It’s all net play. Unless you’re playing with tennis players…

LOL. I thought you had to stay out of the kitchen?

Suffice to say, there is far more net play in a pickleball match than in a tennis match.

Phelps will get dusted in pickleball by Larry who likely has better agility, coordination, and speed on the court than does Phelps.

That’s an advantage in some ways, but a disadvantage in other ways. If he’s good, it can be an advantage. If he hasn’t been practicing, they’ll be able to get to his feet and jam him in his body or catch him with his paddle down and he’s in trouble.

Speed and agility don’t matter as much as patience in pickleball. It will come down to whom Phelps partners with as this will be a ‘Celebrity / Pro’ vs ‘Celebrity / Pro’ match up. If Phelps is paired with Ben Johns ( The Michael Phelps of pickleball) then I would easily bet on their team. If he’s playing against Johns, the odds are in Fitzgerald’s favor as the pros will take over the court. The ‘celebrity’ will just have to cover about 25 % of the court, so patience will play a big part. This is coming from a master swimmer who found pickleball whilst pools were closed and can barely get back into the water over steppin into a… Read more »

He should be careful – swimming and hand-eye sports… sus