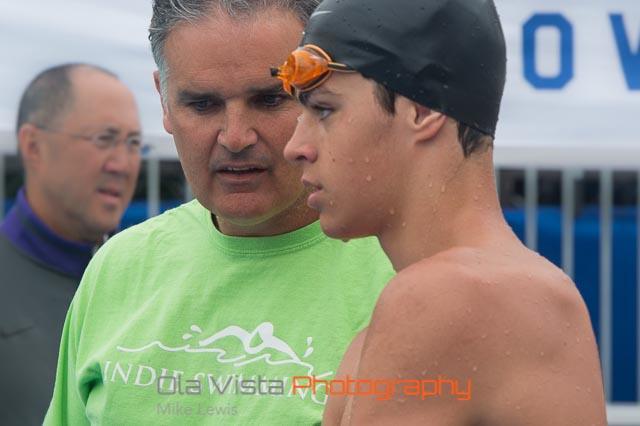 He was successful in that goal, taking the 2nd seed behind PASA’s Andrew Liang (48.30), and in the process he broke the 13-14 National Age Group Record in the event. That broke his own record of 48.68 done in December at Winter Juniors.

At Winter Juniors, he finished tied for 11th overall with non other than Andrew Liang.

The difference between Andrew’s new record and his old record is the back-half of his race, which has become a pattern for him. First he improves the front-half, then the back-half comes around as well – which makes sense with the way he trains until a certain number of failures, and then when those failures become too far apart, he drops his goal times.

This is his third National Age Group Record of the meet; he previously broke the 400 IM and the 200 fly as well – though each of those came by much bigger margins (about two seconds).

Does anyone keep tab how many NAG records he has broken?

Unique as in by an Olympian? Or do you mean unique as off event for him? Would hope you’re not ranking people’s status by unique.

Unique would be the important ones, right? Otherwise it will become how many times did Michael get a best time.

Was just a 20.40 in prelims in that race this morning. Will have to see in finals!