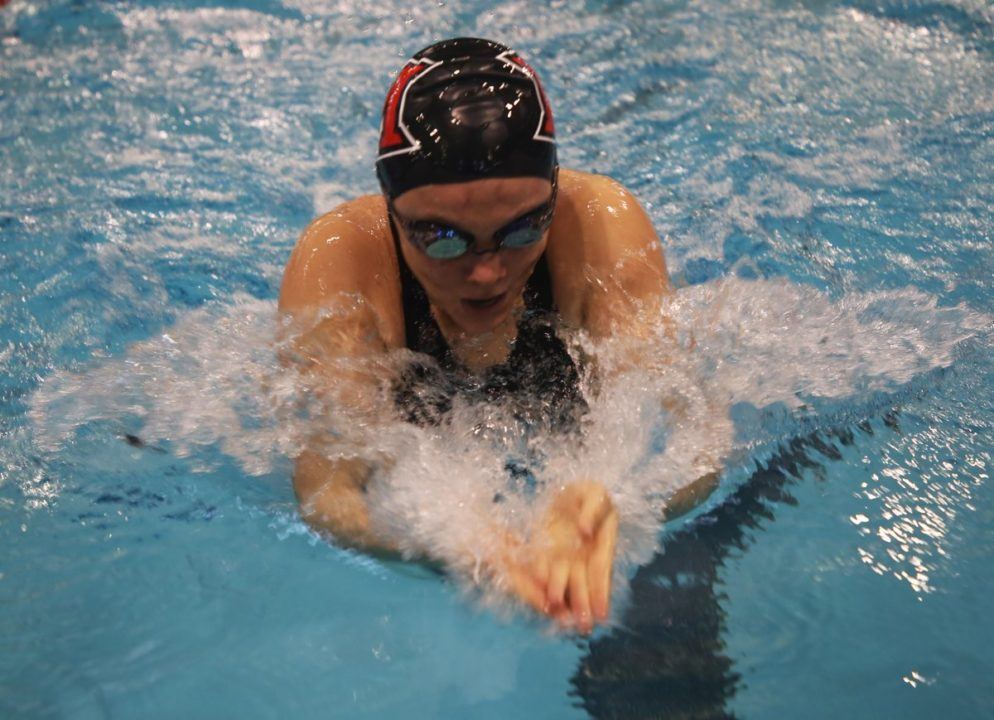 The Miami University swimming and diving team captured a 225-75 win over the University of Toledo on Saturday afternoon inside the Nixon Aquatics Center. Miami won 16 of 17 events versus the Rockets. Current photo via Miami (Ohio) Athletics

The Miami University swimming and diving team captured a 225-75 win over the University of Toledo on Saturday afternoon inside the Nixon Aquatics Center. Miami won 16 of 17 events versus the Rockets.

The men also swam in an intra-squad meet.

Miami returns to action Saturday, February 2 at 1 p.m. in a dual meet at home versus Xavier.

OXFORD, Ohio – The Toledo women’s swimming and diving team fell to Miami (Ohio), 225-75, today in the final road contest of the regular season. The Rockets finished in the top-three in 11 events, highlighted by freshmen divers Joelle Gallais and Sydney Jackson each setting personal records in both the 1- and 3-meter disciplines.

Jackson’s score in the 1-meter also qualifies her for the NCAA Zone “C” Diving Meet, joining Gallais who qualified earlier in the season.

“I’m really happy with how today went,” diving coach Gabby Agostino said. “They had positive attitudes going into the meet and dove very consistently. I’m happy that Sydney got her zone score on 1-meter.”

Gallais won the 1-meter with an even score of 300. Her score is the second-best in UT history, putting her 6.52 points behind Megan McKinley (2008). Jackson took third with a score of 274.05 which puts her seventh all-time at UT.

In the 3-meter, Gallais took third with a score of 309.90, putting her third all-time at UT. Jackson finished in sixth after registering a score of 269.18, putting her seventh all-time in that event as well.

In the pool, the 200 medley relay “A”  squad of juniors Maureen O’Sullivan, Bec Welke, Duda Sales and sophomore Lisa Eriksson took second after finishing in 1:45.72. Their time was a mere .10 seconds behind Miami’s “A” team and five seconds away from setting a program record.

Sophomore Kristin Straszacker had another impressive weekend, finishing in the top three on three occasions. The Cape Town, South Africa, native took second in the 100 and 200 back, finishing in 57.53 and 2:04.67, respectfully. Straszacker also took third in 200 yard IM after touching in in 2:09.91.

Eriksson was also a big contributor. Aside from helping in the 200 MR, Eriksson took third in the 50 and 100 freestyle events. In the 50 free, she was one of five swimmers to finish in the 24 second margin, stopping the close at 24.42. Her time was .27 seconds behind event winner Anna Justinak. The 100 free was another close race that saw Eriksson finish in 52.91, 1.6 seconds behind event winner Camila Lins de Mello. Eriksson was also the lead off on UT’s “A” squad in the 400 free relay that took second in 3:34.96.

Up Next
The Rockets return to Toledo for their final dual meet of the season as UT hosts Bowling Green in a two-day battle that kicks off at 5 p.m. on Friday, Feb. 8.