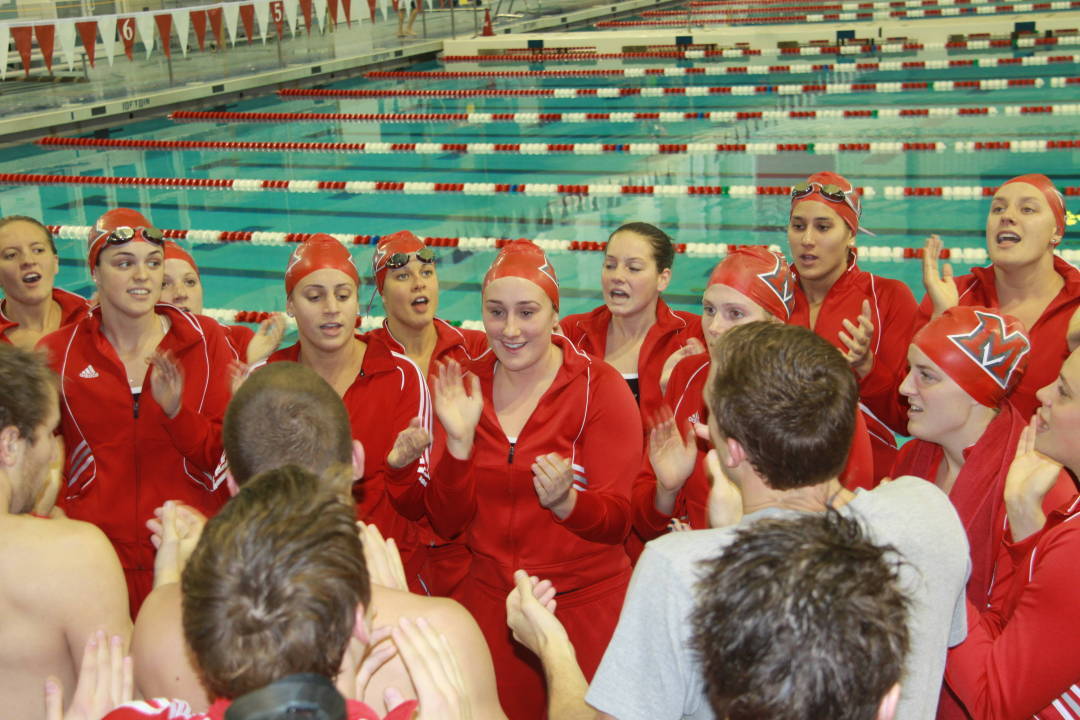 The Miami women went 14-for-14 against Xavier on Saturday night. Current photo via Miami University Athletics

Bray was involved with various projects in the Gainesville community over his four years as a Gator.

In an intra-state showdown of Ohio mid-majors Miami University and Xavier on Saturday, the RedHawks emerged victorious with a pair of exhibition-cushioned wins.

The men’s meet officially goes into the books at 142-113, with two exhibitioned individual events. The Miami women went 145-102, and exhibitioned all-but-event-winners in every individual race after the opening 1000 free (where they went 1-2-3-4).

That time in the 200 is the second-best time of his career in his first ‘official’ swim for the RedHawks.

The distance group is a weakness for the Miami men, as evidenced by that sweep. They did get a win in the 1000, though, from Bryan McNamara (9:45.69) who was their only entry in the race. McNamara swam the 100 free as his second event. That swim from the sophomore McNamara is already faster than he was in the 1000 free all of last season.

Editor’s note: the official announced score from meet hosts Miami does not match the score in the results file linked below. We’ve opted to use the announced score above.

The Miami women won all 14 of the day’s events, though through the aforementioned exhibitions the final score didn’t reflect the dominance of the performance.

The big story of the day for the RedHawks was the emergence of All-Conference breaststroker Stephanie Lemire in the 100 freestyle.

After her relay DQ’ed in the 400 medley (Miami still won in 3:57.34), Lemire got her first official time of the day by winning the 100 breaststroke in 1:05.16, which is a solid mid-October swim as compared to what she did last season.

But what was really noteworthy was what came next. Lemire didn’t swim the 200 breaststroke, her best event, and instead took up the 100 free, which she won in 52.80. That’s already within three-tenths of a second of the best time Lemire did in the event back when she was only 14 (52.53) at the Minnesota High School State Championship meet. She topped her teammate Annie Marquiss (53.49) for that win.

Lemire didn’t get close to that time as a freshman for Miami and didn’t factor into their free relay at all come season’s end. This year, however, they had her lead off the 200 free relay, where she split a 24.52. The Redhawks return most of their top sprinters from last season, but early returns are that Lemire has the potential to fight for a spot on the free relays in addition to her expected participation in the Redhawks’ medley relays.

Xavier, meanwhile, once again relied on their highly-touted recruit Paxtyn Drew for some silver-lining on the day. Paxtyn took a legitimate, non-exhibition-enhanced, second-place finish in the women’s 100 backstroke in 58.88. After hitting a plateau in her last years of high school training in Indiana, Drew has responded well early-on to her training at Xavier. She is the defending Big East Swimmer of the Week.

The Miami women will swim next against the Ohio State women on Thursday, October 23rd. The Miami men will have to wait a week longer for their next competition, when they’ll also race a Big Ten opponent: Purdue.

Xavier, meanwhile, will have a co-ed dual against NAIA opponent University of the Cumberlands.