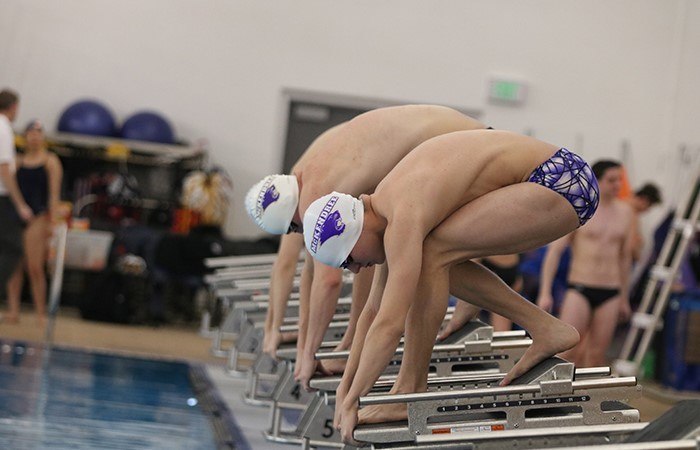 McKendree junior Gregg Lichinsky continued to have a great meet, kicking off the action by breaking his own GLVC Championship record in the 100 fly. Stock photo via McKendree Athletics

McKendree junior Gregg Lichinsky continued to have a great meet on Thursday, kicking off the action by breaking his own GLVC Championship record in the 100 fly. Lichinsky clocked a 46.62, touching first by roughly 1.5 seconds. Not only did the swim dip under Lichinsky’s own GLVC record of 46.86 from last year, Lichinsky also hit the NCAA DII A cut in the event. Lichinsky also leads the NCAA DII by over half a second, and is the only swimmer in the division to have broken 47-seconds so far this year.

Lichinsky would go on to help lead the McKendree 400 medley relay to victory and another GLVC meet record with a 46.02 fly split, which led the field of flyers by well over a second. McKendree had Carey DaVante on backstroke with a 47.57, while Henrik Dahrendorff swam a 53.91 on breaststroke, and Xander Skinner posted a 43.24 anchor split, resulting in a 3:10.74 final time. McKendree came in well under the previous GLVC record of 3:12.06. Indy’s Jeron Thompson had the fastest backstroke time in the field with a 47.28, while Missouri S&T’s Joshua Umrysh had the fastest breast split in 53.00, and Lindenwood’s Zach Linder swam a 43.18 for the fastest free split in the field.

Fabio Dalu, the McKendree sophomore who broke the GLVC record in the 1000 free on Day 1, broke another record today, winning the 400 IM. Dalu swam a 3:47.37, pulling away from Indy freshman Landon Driggers (3:48.38) on the 2nd half of the race. Dalu and Driggers both came in under the previous GLVC record of 3:48.56, which was set in 2016. Dalu now leads DII swimmers in this event as well, while Driggers in currently 2nd.

Drury got in on the record-breaking action when freshman Karol Ostrowski posted a 1:34.93 to win the 200 free handily. Ostrowski wasted no time getting out to a fast start, splitting 45.57 on the first 100. The swim mareked the first GLVC Championship time under 1:35, as Ostrowski came in under the previous meet record of 1:35.05. Ostrowski was already the top 200 freestyle in the NCAA DII this season, with his previous best of 1:36.27, and is now the only DII swimmer that’s been sub-1:36 so far this season.

Drury sophomore Kasia Rogowska continued on her great start from Wednesday, winning the 100 fly to start of Thursday’s session. Rogowska clocked a 54.46, narrowly edging out Lindenwood senior Lexie Winnett (54.68) and Indy junior Johanna Buys (54.78). Rogowska won the race thanks to the fastest 2nd 50 split in the field – 29.41. Her time now stands 2nd in the NCAA DII this season, while Winnett is 3rd and Buys is tied for 5th. Notably, Katie McCoy, an Indy junior who has the capacity to be a top 100 flyer in the NCAA did not race the 100 fly today, swimming the 400 IM instead.

Lindenwood sophomore Beata Maruszczyk took the 200 free with a 1:48.81, using a strong back half to pull away from the field. Maruszczyk was already the top DII swimmer this season with her previous season best of 1:49.07. She was just off the GLVC championship record of 1:48.72.

Looks like a very competitive meet on both Men’s and Women’s side. Some nice A cuts and some good solid B cuts.
Best of luck to all the teams on Saturday.