The McKendree University men’s squad overtook the lead, while the Drury University women’s team extended its advantage after the second of four days. Archive photo via Drury Athletics 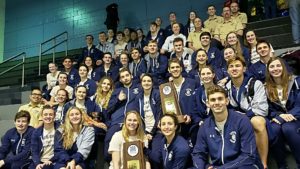 Both the men’s and women’s teams from Queens University of Charlotte claimed their sixth straight Bluegrass Mountain Conference Championships on Sunday. 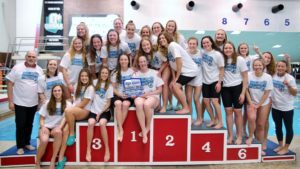 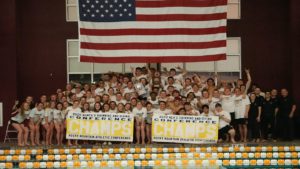 The Maverick women broke the team score record with 1,171.5 points. The championship marks the fourth for the men and the second for the women. 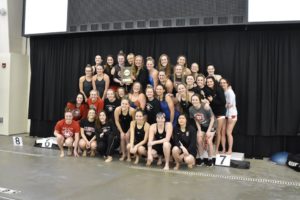 CRAWFORDSVILLE, Ind. – The McKendree University men’s squad overtook the lead, while the Drury University women’s team extended its advantage after the second of four days of the 2020 GLVC Swimming and Diving Championships on Thursday at the Crawfordsville Aquatic Center in Crawfordsville, Indiana, February 13.

After a number of records and gold medals, the Bearcats (720.5) went from being down 7.5 points in third place yesterday to taking a 21.5-point lead, following the second day of competition. The Lady Panthers moved from a six-point lead after Day 1 to an 88-point edge at the end of Day 2.

The University of Indianapolis (699) scored a whopping 429 points today to move into second place on the men’s side, sneaking past yesterday’s leader, Drury (599), by 100 points – now in third place after scoring 236 points today. Staying in fourth was Missouri S&T with 573 points, while Lindenwood University (543.5) remained in fifth and the University of Missouri-St. Louis (355) held its spot in sixth. Bellarmine University (258) moved up one spot to No. 7, while Truman State University (233) did the same with Lewis University (233) dropping one place to put them both in a tie for eighth. William Jewell College (208) and Maryville University (124) held steady at No. 10 and 11 to round out the field.

There were 12 GLVC champions crowned Thursday, with four of those winners setting new league standards and another breaking a record during the morning prelims.

The medal ceremonies began with an afternoon of diving that saw Indianapolis junior Payton Staman set the first league record of the day with 579.95 points on the men’s 1-Meter board, breaking his own mark of 515.20 from last year’s event. In fact, the reigning GLVC Diver of the Year led a repeat Greyhounds’ sweep on the medal podium, as freshman Cade Hammond also beat Staman’s 2019 total with 554.30 for silver ahead of junior Josh Zylstra who nabbed bronze (492.10). On the women’s side, reigning GLVC Diver of the Year Cassie Kury looked ready to three-peat as she took gold on the 3-Meter board with 474.20 points, just .65 shy of the league standard set by Drury’s Rebekah Laupp in 2014. Placing second was Lindenwood sophomore Katie Werkema (437.15), and finishing with the bronze was Maryville senior Mariah Hagerty (363.10).

The evening swimming finals started with a pair of NCAA B-cut Qualifying Standards in the 200 Freestyle Relay in which the Drury women clocked a GLVC- and pool-record time of 1:31.74 – the fastest in NCAA Division II this season – for the gold, while the McKendree men followed by matching the Lady Panthers’ effort to a ‘T’ with two new records and the best D-II time in 2019-20 (1:18.94). Drury’s time was a betterment of the 2017 Panthers foursome that went 1:32.23, and the Bearcats topped their 2019 squad’s time of 1:19.33.

Next came the women’s 100 Butterfly that saw Drury senior Bailee Nunn winning the event for the third time, touching in at 53.14 to record a D-II A-cut. McKendree sophomore Gregg Lichinsky continued what he started on the first day of the meet by breaking another record during the preliminary round of the men’s 100 Fly in a time of 46.86 before winning gold in the finals by swimming 47.05, which also bested last year’s record of 47.25 set by Drury’s Pavel Semochkin. Both of his times in the event qualified as NCAA B-cuts.

Drury’s Erica Dahlgren finished her dominance of the 200 Free with a fourth-straight winning effort of 1:49.52, recording a B-cut, before McKendree junior Xander Skinner also hit a B-cut with a time of 1:36.35 for the gold.

Wrapping things up for the night was the 400 Medley Relay where the Drury women repeated as gold-medalists in a time of 3:40.69, which is the fastest in Division II this season and a B-cut effort. The McKendree men broke last year’s record by the Miners (3:13.43) with a new GLVC and pool standard of 3:12.06 (B-cut).

Day 3 of the GLVC Championships begins Friday with preliminaries of the 500 Freestyle, 100 Backstroke, 100 Breaststroke and 200 Butterfly, beginning at 10 a.m. ET. Limited bonus coverage of the preliminaries will begin at 9:45 a.m. on the GLVC Sports Network, while full coverage begins at 1:45 p.m. for women’s 1-meter and men’s 3-meter diving, followed by swimming finals at 6:30 p.m.

For complete results and more information, log on to GLVCsports.com/2020swim, and watch complete coverage live and free on all GLVCSN platforms, including GLVCSN.com, GLVCSN iOS/Android mobile apps, and GLVCSN OTT apps on Roku, Amazon Fire TV, Apple TV and Android TV. Fans can also follow the championship coverage on Twitter via the hashtag #GLVCswim and #GLVCchamps.

Indy is being carried by diving. They haven’t won a single event.