McIlquham Steps Down as Alabama Coach 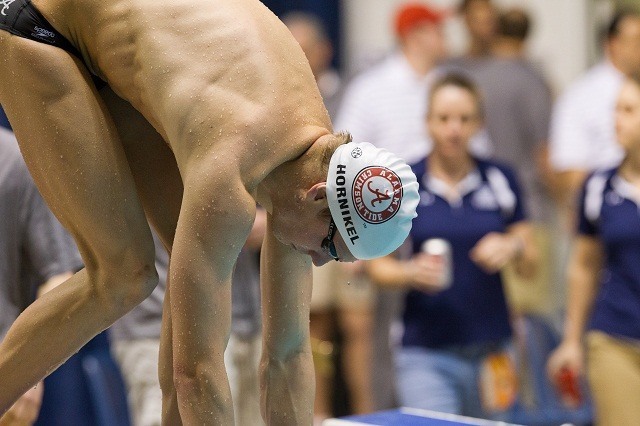 BJ Hornikel is one of the bright pieces that the next Alabama coach will be left with (Photo Courtesy: ©Tim Binning/TheSwimPictures.com)

It’s said in college swimming that every Olympic year is the zero-hour for a ton of moves around the college ranks.

That ball started rolling today as Alabama coach Eric McIlquham stepped down as the head coach of the men’s and women’s programs, which is a position that he’s held since 2003.

“The time is right to step aside and pursue new challenges,” McIlquham said. “I will always be grateful for the opportunity that I had here at Alabama and the relationships I have made along the way. I’m proud of what we were able to accomplish in the pool, in the classroom and in the community. I’m leaving the program in good shape. I want to thank my staff that, as a group, has a combined tenure of more than 70 years at UA.”

In his 9-years there, Alabama has had both its supporters and detractors. The Tide have 8 top-25 finishes between the two teams in that span, including three individual NCAA Titles, 99 All-American honors (not as many as it sounds like for top programs), and 254 SEC Academic Honor Roll awards.

He is known as an outstanding recruiter, despite not getting a ton of top-level talent to land there. Some have speculated that he could be a superstar at the Division II or Division III level because of the way that recruits respond to him.

At the same time, Alabama has lived in the shadow of their in-state neighbors Auburn, who has won multiple team titles in that span, which never sits well in Tuscaloosa. All along, though, it’s amazing that even one program thrives in a state where swimming is about 14th in the ranking of high school sports, let alone two.

The other knock on McIlguham has been trouble developing talent. He’s relied heavily or recruiting international swimmers who have been very good before they get to town.

This Alabama position won’t be the best one available this year, but it will be an attractive one for many coaches. There’s some history there (they won three SEC Championships in the 80’s); they have an outstanding facility in the Don Gambril Olympic Pool (a 50-meter, deep-pool with seating for 1,500); and they have an athletic program with deep pockets thanks to football.

Besides that, the Tide have an outstanding young nucleus that includes sophomores BJ Hornikel and Alex Coci; as well as junior Anestis Arampatzis. There’s some pieces there

Hooray, now hopefully they can get someone in there that can build a good program and develop swimmers.
BTW,what about the assistants?

Don-
I think it is ridiculous to say hooray when someone is let go. Remember this is someone’s livelihood and regardless of what you think of the job they did, show a little respect for our profession.

Typically it is up to the next head coach to decide the fate of the assistants. She/he could retain all. some or none of them.