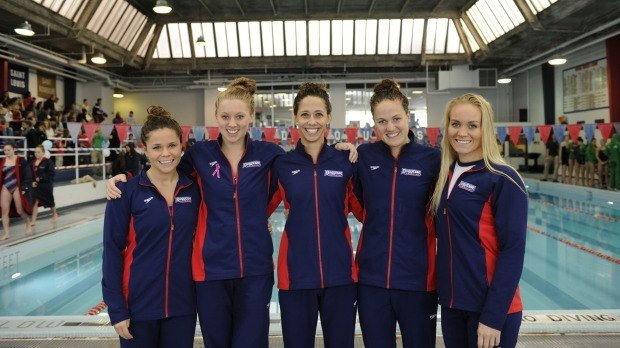 Duquesne had a 5-meet win streak snapped, but did honor their seniors (pictured above) on Saturday against Marshall. Current photo via Duquesne Athletics

The Marshall Thundering Herd women travelled across the state border to Pittsburgh, Pennsylvania over the weekend and took a 167-94 victory over the Duquesne Dukes. That ended a five-meet Duquesne winning streak.

The meet for Marshall included three pool records, including two from swimmers who are just freshmen.

Pulfer etched her name on a second mark when she combined with teammates Gloriya Mavrova, Danica Ross, and Rachel DePietro for a 3:34.45. The old pool record there was a 3:35.25.

“That was fun. The message today I have to the team was to focus on executing smart races and everything else would just take care of itself.”

“We did a great job doing that. And there you go, 3 pool records, lots of unrested season bests, and the win.  I’m really proud to see so many different people winning events or competing at a high level.  We need to operate as a team and we certainly did so today.”

“We have really been on a roll the last few meets with new people winning events for the first time.  This weekend it was Mikaya and Chloe.  Last week it was Savannah and Madi, and those two were also great today.  Many people came to play today.  I thought Nele and KP (Kacey Preun) were excellent today as well.”

The Thundering Herd are overall a very young team, and two other swimmers added significant breakthrough swims on Saturday. Sophomores Mikaya Reynolds (100 rbeast – 1:07.55) and Chloe Parsemain (100 fly – 58.78) each got their first collegiate wins.

While Marshall was powered by their young swimmers, Duquesne was led by their veterans on senior day.

The two Duquesne wins both came from upperclassmen, fittingly on senior day. Line Lovberg took the first in the 200 fly, swimming a 2:09.01 to beat out her freshman teammate Lexi Santer (2:10.61).

For the home team, Sadie Clifford, Line Lovberg, Bret Luke, Grace Manfroni and Jamie Ruh each swam their last meet on the Bluff.