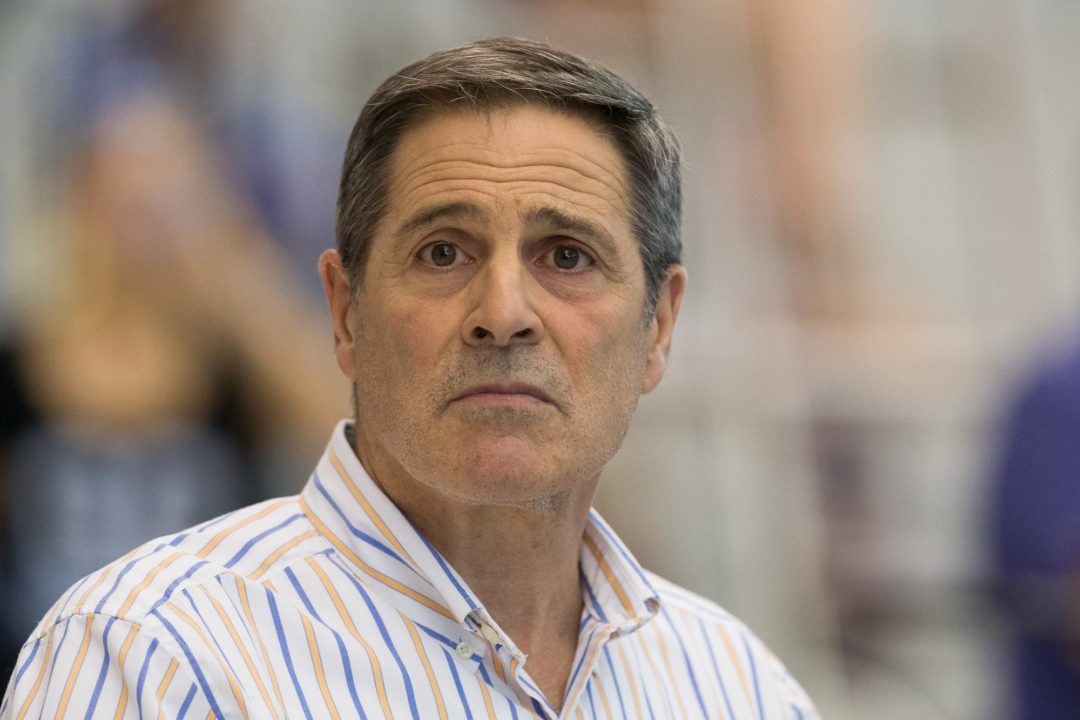 Former UVA head coach Mark Bernardino has landed on a pool deck not too far away from the pool that he called home for 35 years. Archive photo via Tim Binning/TheSwimPictures.com

It didn’t take long for former Virginia head coach Mark Bernardino to land his next coaching job. The man who steered the Cavaliers for 35 years, including the last 6 men’s and women’s ACC Championships, has been added to the staff of the CYAC Swim Team at the Piedmont Family YMCA as a “Coach – Consultant.”

The team has two sites, and this week, Bernardino is expected to be on deck at both locations in Charlottesville, which is where the University of Virginia is located.

Bernardino has quite a resume, including 16 men’s ACC titles – more than anyone in conference history – and 11 women’s conference titles. He’s coached at least one swimmer to every Olympic Games since 1996, and is a 31-time ACC Coach of the Year.

This CYAC program was a huge player in the YMCA scene and on the east coast in the 1980’s and 1990’s, with swimmers like Derrick Mulder and Chris Taylor. Among the more recent top swimmers in the program include brothers Ben and Eli Holstege (Eli was a 57.0 in the 100 breast at last year’s VISAA Championships) and Storrs Lamb; along with a pair of impressive 15-year old 200 butterfliers in Jack Robbins and Brian Hynes.

The team’s growth has exploded in the last few years, going from 150 swimmers in 2011 to over 250 by the 2012-2013 season. That growth, combined with Bernardino’s presence on deck, should make for a successful program. Even more so, this could ultimately wind up benefiting Bernardino’s old club the University of Virginia, as it should improve the local recruiting pool right in the Cavaliers’ back yard.

Bernardino’s son, who is now a non-swimmer at Virginia, swam for the club in high school. He’s also running “Virginia Swim Camps” in nearby Fork Union at the Fork Union Military Academy.

That is wonderful news for Coach Bernardino and especially for CYAC! They will certainly benefit from his rich experience and we hope he will be happy. Good luck Mark!

First thing he did was “demand” that ALL the swimmers “reach for the wall” after each ending lap. I do believe they all got the point.

Thanks for getting back on the deck Coach Dino