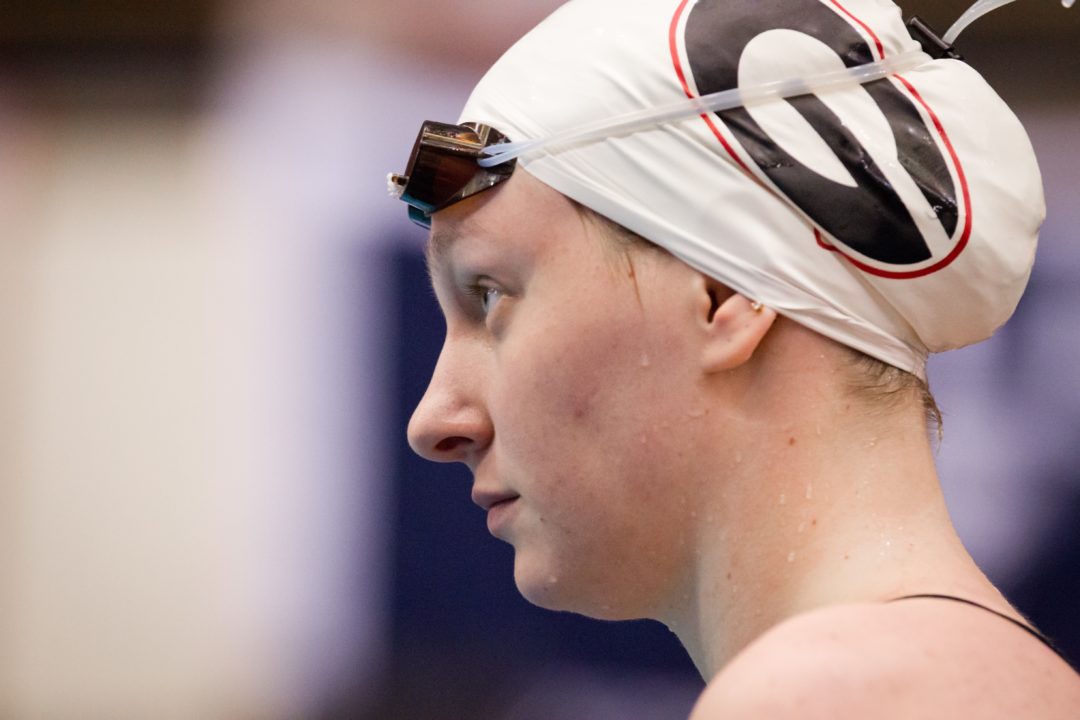 Georgia's Melanie Margalis used a great back-half on her 200 IM to pull away for the top seed on Friday morning in Kazan. (File Photo: Tim Binning/TheSwimPictures.com)

The 3rd day’s morning session at the 2013 World University Games in Kazaan, Russia began with the men’s 200 fly preliminaries, and a taunting swim from Hungary’s Bence Biczo.

The 20-year old swam a 1:58.43 to take the top seed overall headed into the semi-finals, but we should see him drop some considerable time as the rounds wear on. Historically, even at this time of year a few weeks short of his big taper, he’s usually much faster.

As he dips down toward the 1:55 or 1:56 range, it’s not clear how much anybody in this field can go with him. American Michael Flach took the 2nd seed half-a-second back in 1:58.94, and Canada’s David Sharpe was 3rd in 1:59.67, and neither has been close to as low as Biczo is capable of taking his times.

The 2nd American, Kyle Whitaker, qualifies on in 13th place with a 2:00.62. We haven’t seen much in the way of scratches at this meet, but Whitaker is contending for gold in the 200 IM final on Friday evening after these 200 fly semis. Don’t be surprised to see him drop this event. The only man in the field who seemed like he had a chance to challenge Biczo was the 2009 meet champion, and Meet Record holder, Pawel Korzeniowski, but he had a poor prelims swim to wind up 17th and out of contention. He fell victim to a very tightly-bunched group of swimmers in the 2:00 range.

American Melanie Margalis looks to be in a similar position after the prelims of the women’s 200 IM, where she took the top seed by over a second with a 2:13.62. She used her impressive breaststroke leg to put some damage on Japan’s Sakiko Shimizu, who wound up with the 2nd seed in 2:15.16.

The two were in a dead-heat at the 100 meter mark, but Margalis’ impressive back-half gave her the edge over Shimizu and fellow American Sarah Henry (2:15.56).

Russia’s Daria Belyakina was 4th in 2:15.85, and she will battle for a podium spot with her teammate Viktoriya Andreeva, Australia’s Aislin Scott, and Poland’s Alicja Tchorz.

Kohinata, and his teammate and 3rd-seeded Yukishiro Takahashi, will look to reclaim some Japanese pride in this event that they have stunningly not won since the 1997 Universiade: shocking given the country’s overall success in the breaststroke events in that period.

Lying in wait, though, is Russia’s Vyacheslav Sinkevich, who was only 4th in prelims in 2:13.26. He’s the second-fastest swimmer in the world thus far in the event in 2013, and with how well the Russians have swum overall at this meet, indicators would be that he’s going to take his result way down in the semi-finals.

Russia’s Anastasia Zueva, who is perhaps giving her healing leg a last challenge before making a final decision on whether to go at the World Championships, took the top seed in the 100 backstroke in 1:00.82. She swam this race much like we’ve seen her counterpart Yulia Efimova swim her breaststrokes: on the back-half.

Zueva went out in just 30.0, which is slower than 5 of her competitors, but came back hard in 30.7 to wind up at the top seed. That was in sharp contrast to the American 2nd-seed, who split 28.8/32.0 on her splits. The two swam in the same heat in the morning, and though they’ll be in opposite heats in the semis, expect them reunited again in the final. That should produce an interesting race.

Others to make it back for the evening include Canadian Brooklynn Snodgrass in 1:02.03, Ukraine’s Daryna Zevina in 1:02.21, and the other Canadian Gabrielle Soucisse just sneaking in at 16th in 1:03.03.

A lackluster preliminary round of the men’s 50 backstroke saw the top seed go to Italy’s Niccolo Bonacchi in 25.18, followed by Australian Ben Treffers (25.26) and Israel’s Guy Barnea (25.30).

Russian Vlad Morozov, who is eligible to swim this race at the World Championships, was the 4th seed in 25.36. If he can’t muster something at least under 25 seconds in the later rounds, we may see him drop the race at Barcelona.

Americans Jacob Pebley (11th) and James Wells (14th) kept the streak of putting all of the US swimmers through to evening swims alive, though it seems unlikely either will contend for a medal.

American’s Stephanie Peacock and Ashley Steenvoorden will very much contend for medals after the final preliminary race of the day, as they took 1st and 3rd in times of 16:23.37 and 16:28.94, respectively. For Peacock, she continues to come back from a mysterious illness that kept her out of the NCAA Championships, but she seems to be back at full-steam now.

In between them is a very good young Canadian distance swimmer Martina Caramignoli, who was 2nd in 16:28.52.

Clearly, I continue not to understand all the tactics.
So, Kyle Whitaker swims the 200 fly prelims but he has the 200 IM final tonight. He would have the 200 fly semi-finals just before. So, I think he’s smart and will not swim the butterfly tonight. But if its the case, what’s the use of swimming in the morning an event you know you will scratch later? He’s more tired and it’s a wasted energy.
And Megan Romano continues to swim backstroke. It’s hopeless!

It is called arrogance.. but the medal goes to someone else for 200 Im

Too happy! I did it!