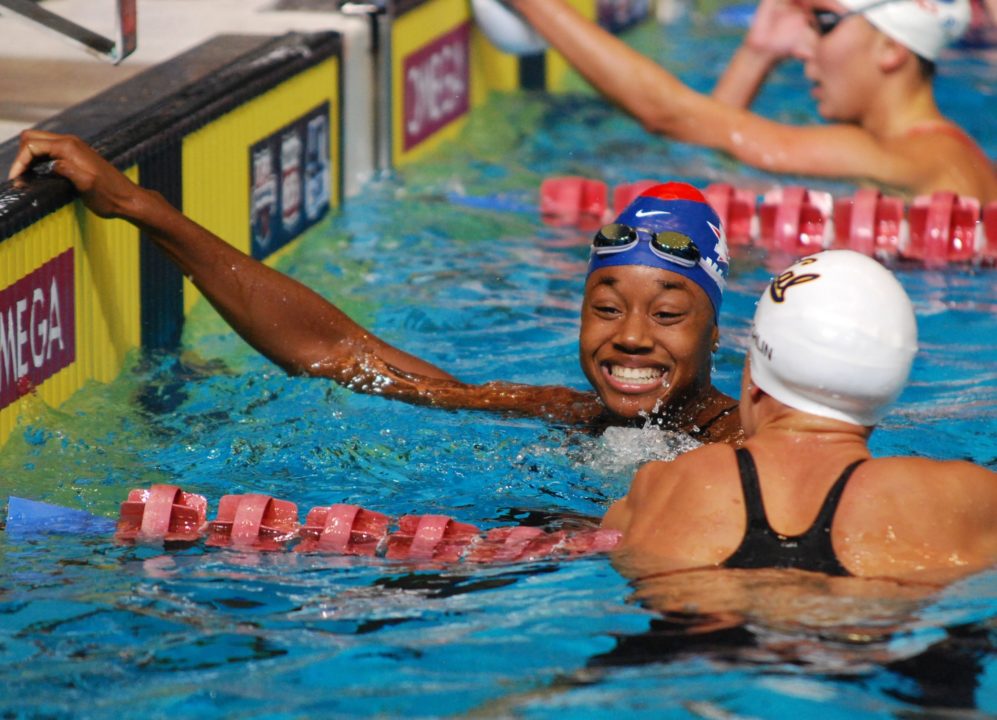 College Station, TX, November 20, 2014 – The first prelim session at this year’s Art Adamson Invitational has already provided thrilling racing action, primarily on the women’s side.  With the teams of Texas A&M University, Stanford, Boise State women, LSU, SMU, TCU, Grand Canyon and Arizona State competing at this high-profile meet, this morning promises to be just an introduction to what is in-store through Saturday.

The best was saved for last this prelims session, with Stanford’s Simone Manuel (freshman) earning an NCAA “A” cut in the 50y freestyle. Her time of 21.81 cleared the 21.90 “A” standard this morning and gave Manuel the top spot in the country in this event.  The next twelve women 50y freestyle competitors at this morning’s session cleared the NCAA “B” cut of 22.99.

The men’s side did not produce any real fireworks, although there were still some swift times posted this morning.  Danny Thomson from Stanford (junior) clocked the field’s fastest time in the men’s 500y freestyle with his time of 4:24.77.  This was the only “B” cut earned in this event in the morning.  A few more “B” cuts were seen in the men’s 200y IM, where the top six cleared the standard of 1:49.09.  Senior David Nolan from Stanford led the way in 1:44.90, followed by teammates Tom Kremer (1:45.73) and Max Williamson (1:46.15).

The men’s 50y freestyle was rather quiet as a whole; Stanford’s Sam Perry did make a spark, however, with this top time of 20.10 to set things up for tonight’s final.  He, along with Grand Canyon’s Ilya Glazunov (20.18), were the only two of the prelim field to earn “B” cuts in this event.

was there any doubt? she is quick! (understatement of the year)

I think she has a shot at the American record from Lara Jackson 21.27 at NCAA’s!

Oh yes! She will one day crush that suited NCAA record!

I’m hoping for under 21 in the next 3 years! Ivy Martin will challenge it also.