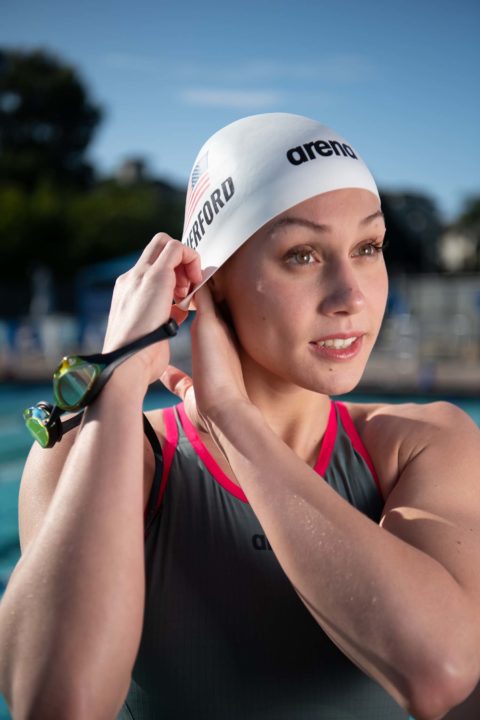 14-time World Champion (7 in long course, 7 in short course, all relays) Mallory Comerford has signed her first major suit deal since turning pro after the 2018-2019 season with Arena.

“When I met with Mallory, I immediately knew that she would be a perfect fit for arena,” Arena’s U.S. General Manager Mark Pinger said. “She has a great attitude and wants her actions in
the pool to do the talking. Equally important, she loves our products and is confident that she can rely on the best equipment as she prepares to fulfill her Olympic dreams. We are excited to support Mallory in the best way we can.”

“Turning pro this year, I obviously reached out to arena given their success at the global level,” Comerford said of her new partner. “I tested the suits and felt comfortable and fast and I really clicked with their leadership team. I love the suits and now can’t imagine competing in anything else.”

Mallory will be racing in arena’s Powerskin Carbon Flex VX in the upcoming 2019 U.S. Open in Atlanta, Georgia on December 4th – December 7th. After the new year she will be one of the first American athletes competing in the latest innovations in arena Powerskin racing, with the soon to be released Powerskin Carbon Glide and the Powerskin Core FX. As Mallory chases victory in 2020, the different race suits offer enhanced technology to deliver uncompromising speed, optimized body position, and power in the water.

Comerford trains at the University of Louisville, which is where she attended college as well. She has raced mostly in a mixture of TYR and Speedo gear since going pro in March of 2019, wearing a TYR branded suit and a Speedo branded cap at the 2019 World Championships.

At the 2017 World Championships, Comerford won 5 gold medals as the United States swept the 5 relay events available to female swimmers. In Gwangju, that turned into 2 gold and 2 silver medals, with her wins coming in the 400 medley and 400 mixed free relays and her silver medals coming in the 400 free and 400 mixed medley relays. She also swam the 100 free individually and finished 7th.

That 100 free will be her best bet at an individual Olympic spot, with  the defending World and Olympic champion Simone Manuel, as well as Abbey Weitzeil, being her primary competitors for a top 2 finish at the Olympic Trials.

Speedo and Arena are SwimSwam partners.

another article I read on this mentions her signing a “Three-Diamonds Deal.” Can anyone shed light onto what that means?

I think it just refers to the Arena logo (or maybe it’s an old Arena logo?) of three diamonds.

I was just as confused about that one for a while.

@arena will the new suits be replacing the carbon ultra and carbon flex?

Speedo and TYR really messed up by letting her get away. She’s the most marketable athlete in swimming. Congrats Mallory and arena!