Magnussen Goes Under 48 For The 13th Time 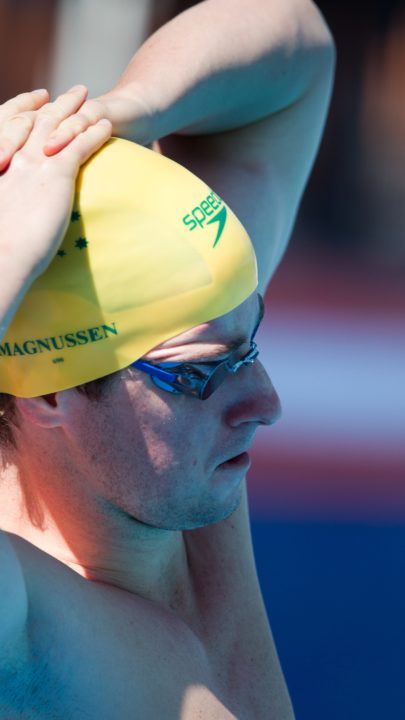 James Magnussen's winning time of 47.97 makes it the 13th time that he has dipped under the 48 second mark... Current photo via Tim Binning/TheSwimPictures.com

James Magnussen took out the 100m freestyle final at the 2014 Swimming WA State Open and Age Championships – but it was the women who stole the show on the final night of competition.

The 22-year-old world champion over the distance came home in 47.97 ahead of fellow Olympian born Tommaso D’Orsogna (49.31) and Andrew Abood (50.05) with 18-year-old Westside swimmer James Raymond taking the State title in 51.26.

Magnussen, who swam 47.73 to win the 100m freestyle final at the Victorian titles last week, said he was happy to go under 48 seconds “unshaved and un-tapered” at the start of the season.

He will stay on in Perth to compete at the BHP Billiton Aquatic Super Series at Challenge Stadium next weekend as he continues his preparations for the Pan Pac and Commonwealth Games trials in April.

“I was wanting to crack 48,” Magnussen said. “I was very happy with the first 50m. I went a bit hard off the turn and it stung a bit in the end but I’m really comfortable with my racing and I’m looking forward to next weekend.”

Up until yesterday it was thought that we would see these two iconic sprinters face off next week at the BHP Billiton Super Series in Perth, but Cielo has pulled out of the competition. Magnussen has used the Victorian State Championships and the Swimming WA Championships as preparation for the Super Series so it should be excited to see what he can do next week.

Magnussen may have attracted plenty of attention – and autograph hunters – on the final night at the WA State Champs but the women also had their share of the spotlight with West Coast’s Jessica Pengelly the star performing winning two gold medals on the final evening to take her final individual tally to six.

Pengelly had a grueling schedule on the last night of competition at Challenge Stadium but kicked off the night with a win in the women’s 400m freestyle, clocking 4:17.82 to finish behind visiting Australian team member Jess Ashwood (4:12.50).

Meanwhile, Arena’s Yolane Kukla pulled off another gutsy win in the 50m freestyle, clocking 25.58 to claim the sprint double. After a record-breaking performance in the 100m last night, Kukla was fastest off the blocks over the one-lap distance and dug deep to see off a three-swimmer attack from Rockingham’s Holly Barratt, Perth City’sBrianna Throssell and visiting Australian team member Melissa Mitchell. In the end it was the three hometown girls who finished on the dais with Throssell taking silver in 25.64 and Barratt bronze in 25.73.

And after breaking the State Residential record to win the women’s 19 years 100m backstroke last night, Adelaide Hart shaved the time down further to win the open title in 1:01.67 and sprint double.

There were record-breakers among the men too with Leisurepark’s Tommy Sucipto taking out the 100m breaststroke in a 19 years State record time of 1:02.33 and West Coast’s Alex Milligan claiming a new 15 years record of 1:06.22 to take State bronze.

In the 200m breaststroke it was Westside’s Sigrid de Vries who touched the wall first in 2:38.02 with Kate Bird powering home in the final 50m to almost claim silver. She was touched out at the wall by de Vries’ teammateJustine Spurr (2:40.73 ) with Bird taking bronze in 2:41:13.

In the men’s 50m backstroke, Arena’s Matthew Meinema touched the wall in 27.11 to take the State title ahead of rising Broome swimmer Zac Incerti (27.59) and All Saints’ James Hansford (27.81).

Jeff, is his 13th time under 48(all textile) and he surpassed Alain Bernard with 12 times under 48(all suited).Cielo has eleven times(two textile).

I made an error on 13, it really should have been 14 including today and Cielo is 13 according to FINA, that is overall, not breaking it down. According to swimrankings.net Bernard (who I should have included in the article) also had 13 times under 48.

This is sincere please let me know if there is somewhere this information is proven to not be correct.

Normally, coach Alex get his data from Danial Takata(a pro statistical guy).I will talk to him to know if he forgot something(maybe a opening relay swim?)

That’s great stuff.. I hope Magnussen can achieve the same level of consistency in swimming 47s the same way his compatriot Cate Campbell has been swimming 52s consistently lately..