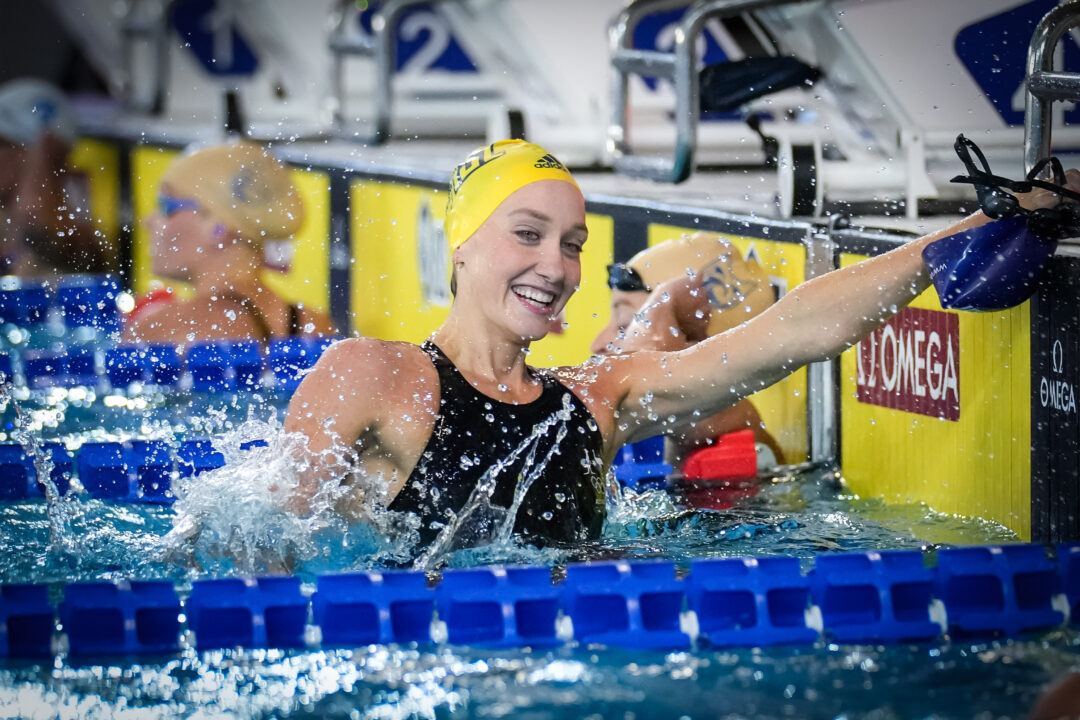 The Australian Olympic gold medalist says she is "feeling a lot better" and hopes to fly to Berlin on Tuesday and gear up for the FINA World Cup. Current photo via Mike Lewis/Ola Vista Photography

Mckeown discusses recovering from a torn labrum she sustained before the Olympic Games and trying out a myriad of different training groups in Queensland.

Wilson told SwimSwam she’s “truly on the mend and feeling a lot better,” on Thursday, though she also spoke about the symptoms she experienced in the days leading up to her positive test on Instagram.

Doing a brief Q&A with her followers on Instagram Stories Wednesday night, Wilson said she felt sick for “probably five days” before testing positive. The LA Current swimmer said she lost her voice and had a cough initially, and then lost her sense of taste and smell about four or five days into feeling ill, receiving the positive test the day after.

“I’m doing okay now, I’m breathing a lot better, no fever, sore throat, anything along on those lines,” she said on Instagram. “I’m just waiting to get released out of here.”

Wilson also spoke in full support of the COVID vaccine despite the fact she contracted the virus while fully vaccinated.

“I still believe in the vaccination, it protected everyone around me from this terrible virus,” she said. “So I still encourage everyone to get vaccinated. If not for themselves, to protect the people around you.”

After being forced out of Match 8 of the ISL regular season, the LA Current’s last meet until the playoffs in November, Wilson will now have about a month and a half to fully recover before she’s called on to compete in the ISL again—though she plans on jumping in sooner than that.

“I was able to do yoga and Pilates today in my room,” she said Thursday, “So I’m hoping that I get a negative test before Tuesday.”

If all goes according to plan, the 27-year-old will fly to Berlin on Tuesday, where she hopes to gain some strength in training and possibly race in the opening stop of the FINA World Cup.

Wilson says she’s planning on racing in the entire series before the ISL playoffs begin on November 11, with a short training camp in Israel alongside fellow LA Current member Anastasia Gorbenko during the two-week break.

“But all this just fully depends on what my body is capable of,” said Wilson.

“I’m not sure what each day is going to hold for me at the moment, I’m not sure how my body’s going to pull up,” she added on Instagram. “All I can do is take it one day at a time and hopefully day by day get stronger and I’ll be back competing as usual in no time.”

Wilson has been one of the top performers in the ISL regular season, ranking 20th overall in MVP scoring with 108.5 points despite missing the entirety of Match 8.

Her standout performances have included sweeping the women’s 200 freestyle in all three of her match appearances, and she’s had additional individual victories in the 100 free (Match 5) and 400 free (Match 4) while also playing a pivotal role on relays.

Get well soon and don’t rush back to swimming.