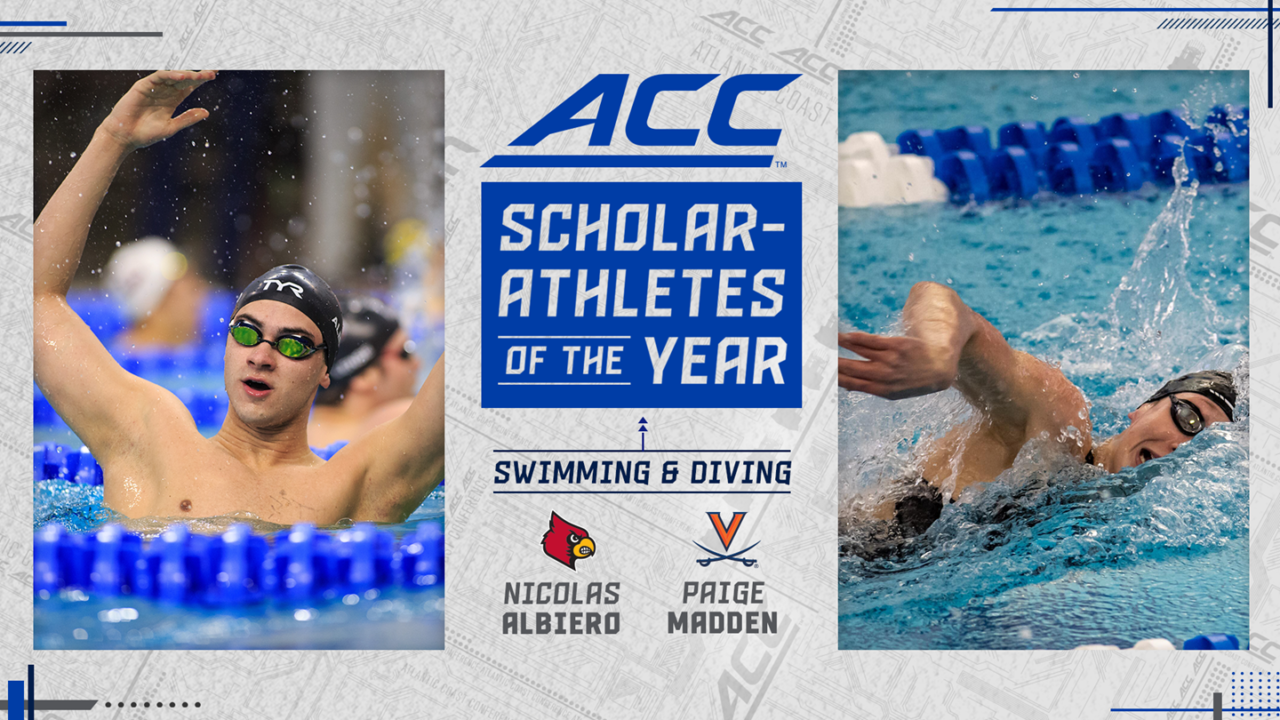 NCAA champions Paige Madden of Virginia and Nicolas Albiero of Louisville were named 2020-21 ACC Scholar Athletes of the Year for the second straight time. Current photo via The ACC

GREENSBORO, N.C. (theACC.com) – NCAA champions Paige Madden of Virginia and Nicolas Albiero of Louisville highlight the 2021 All-ACC Academic Swimming and Diving Teams as the Scholar-Athletes of the Year.

Madden has been named the ACC Women’s Swimming & Diving Scholar-Athlete of the Year for the second season in a row. The Mobile, Alabama, native majors in kinesiology with a minor in health and wellbeing and boasts a 3.703 career GPA. She achieved a GPA of 4.0 in the Fall 2020 semester, is a three-time CSCAA Scholar All-American and was a 2020 CoSIDA Academic All-American.

Albiero was selected as the ACC Men’s Swimming & Diving Scholar-Athlete of the Year for the second consecutive season. The senior from Louisville, Kentucky, majors in Exercise Science and has a 3.96 career GPA. Albiero is a three-time CSCAA Scholar All-American and was a 2020 CoSIDA Academic All-American.

The reigning NCAA Champion in the 200 butterfly, Albiero helped the Cardinals to their first-ever ACC Championship. The senior was part of Louisville’s 200 medley relay team that won the Cardinals’ first NCAA relay title. Albiero is a member of the USA National Team, was the 2021 ACC Swimmer of the Year and was a seven-time All-American at the NCAA Championships.

Madden and Albiero are two of the seven total four-time All-ACC Academic honorees on the list. NC State’s Julia Poole and Eric Knowles, Florida State’s Josh Davidson, Louisville’s Nikolaos Sofianidis and Virginia’s Keefer Barnum have all been named to four All-ACC Academic Teams in their careers.

The ACC Scholar-Athlete of the Year awards were established in September of 2007 to be awarded annually to the top junior or senior student-athlete in their respective sports. Candidates for the awards must have maintained a 3.0 grade point average for their careers, as well as a 3.0 for each of the last two semesters.

The ACC Honor Roll, which recognizes all conference student-athletes with a grade point average of 3.0 for the current academic year, will be released in July.