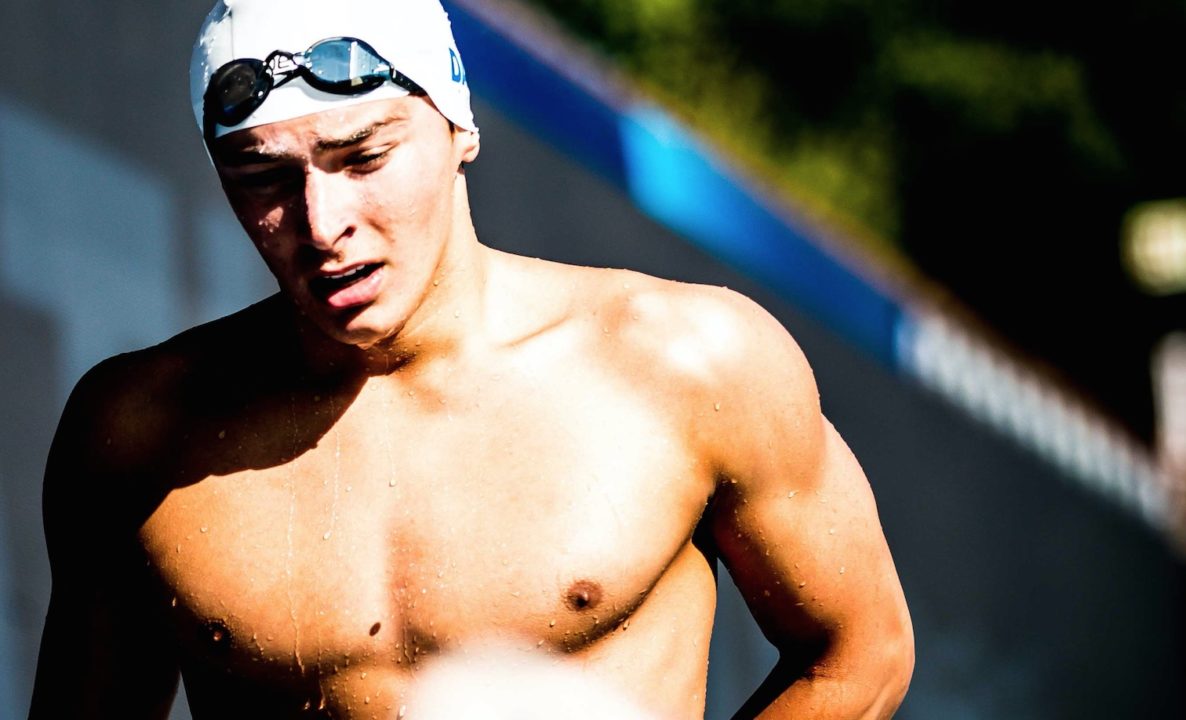 After swimming the 400 free preliminaries on Thursday morning, US National Teamer Luca Urlando left an empty lane in the heats of the 200 IM. Archive photo via Jack Spitser/Spitser Photography

US National Teamer Luca Urlando was a no-show on Thursday morning for his first scheduled race of the 2019 U.S. Open. That was after swimming a 3:53.88 in the 400 free one event earlier that was about a second short of his lifetime best and puts him into Thursday’s “B” final, pending results of the B-flight of the heats.

Last season, at 17-years old, Urlando was the 11th-best American in the event at 2:00.12. He now has scratches from the event in each of his 2 big long course meets this season – at the Greensboro Pro Swim Series stop, he qualified for the A final, but scratched to focus on the 100 fly final instead.

Urlando was one of a number of big names to no-show or declare false starts (rather than pre-session scratches) in Thursday’s “A” flight races at the U.S. Open. Other big absences include Anthony Ervin skipping heats of the men’s 50 free, where he’s the defending Olympic Champion. His only other entry this week is in the 100 free.

US National Teamer and World Championship double silver medalist Andrew Wilson left an empty lane in prelims of the men’s 200 IM as well, while National Age Group Record holder Zoe Skirboll left empty lanes in both of her events on Thursday morning: the 50 free and 200 IM.

Links to live-streams and live results are not working well, anyone experienced the same?

What does it mean to declare a false start?

A while ago if a swimmer didn’t want to swim a race, they would get up on the blocks and purposely false start. They would not suffer resulting consequences such as being forced to miss their next event. Now they can declare that they aren’t going to show up for the event and not show up at all = Declared false start (DFS). I was confused for quite some time and sent my kid to a meet telling him that a bunch of kids were called for false starts at this ___ championship meet the previous year. Resulted in much embarrassment being a NARP.