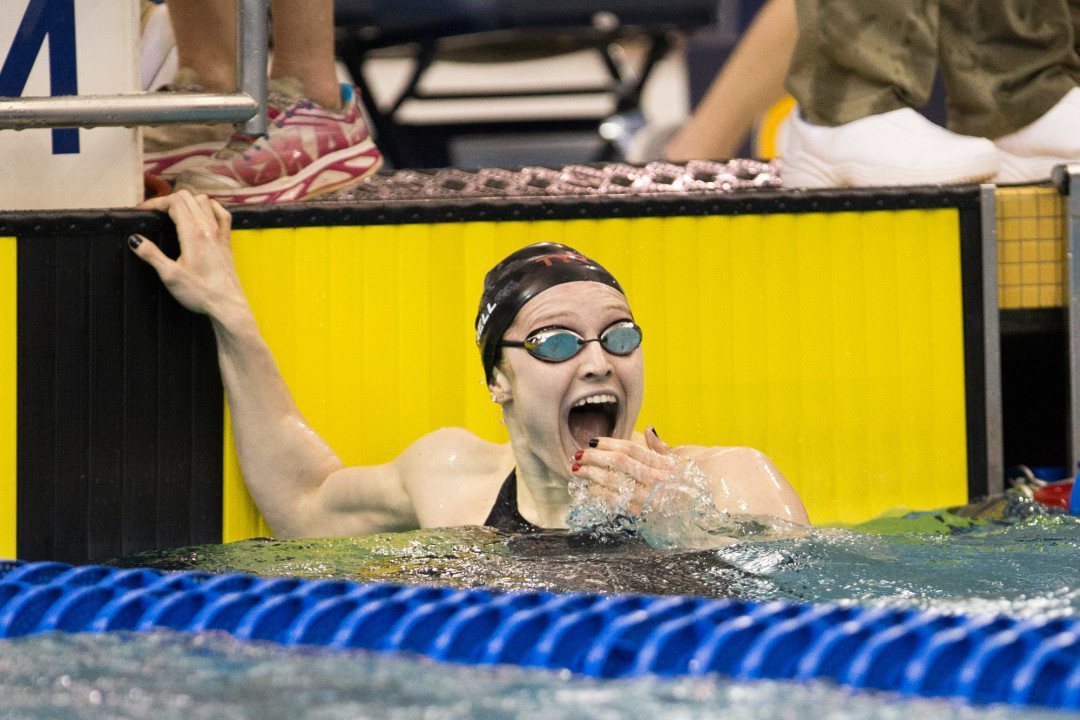 Louisville senior and America's butterfly queen Kelsi Worrell has been announced by the Atlanta Coast Conference to receive the 2016 ACC Women's Swimmer of the Year award. Current photo via Tim Binning/TheSwimPictures.com

Louisville senior and America’s butterfly queen Kelsi Worrell has been announced by the Atlanta Coast Conference to receive the 2016 ACC Women’s Swimmer of the Year award.

The Mt. Holly, New Jersey native has experienced a phenomenal career as a college athlete and this recognition is one of many legacies she leaves behind. She’s the sixth individual to have won back-to-back recognitions in the conference and in February was named the ACC Championships’ Most Valuable Swimmer for her contributions to the Louisville trophy count.

Worrell raced her way to be the first woman under 50 seconds in the 100 yard fly last year, but now owns the top five times on record, the fastest being her NCAA, American, and U.S. Open record-setting 49.43 at the 2016 NCAA Championships. The Cardinal defended her title in the 100 fly and the 200 fly as well after battling Stanford’s Ella Eastin in neck-to-neck fashion. In addition to those wins and setting the fastest 100 yard fly split of all time, she left Atlanta with All-American honors in the 500 free, 200 medley relay, and 400 medley relay.

Louisville earned another distinction with Mallory Comerford’s Freshman Swimmer of the Year award. Comerford topped the 200 free and picked up runner-up finishes in the 100 and 500 freestyles at ACCs. She even aided the Cardinals in four relays at the championships, one of which was the winning 200 medley relay. In her first experience at NCAAs, Comerford took home silver in the 200 free and another All-America honor in the 500 free.

Virginia head coach Augie Busch was chosen as the Women’s Swimming Coach of the Year. He finished out his third season coaching the Cavaliers with the team’s ninth consecutive ACC title and a fifth place standing at NCAAs.

Elissa Dawson of North Carolina was nominated as the Women’s Diver of the Year, marking the Tar Heels’ first time to accept the honor. She dove for three A final appearances at the conference meet and accepted Honorable Mention All-America nods for her 3-m and platform performances. Abel Sanchez, Dawson’s diving coach, was voted to receive the Women’s Diving Coach of the Year award.