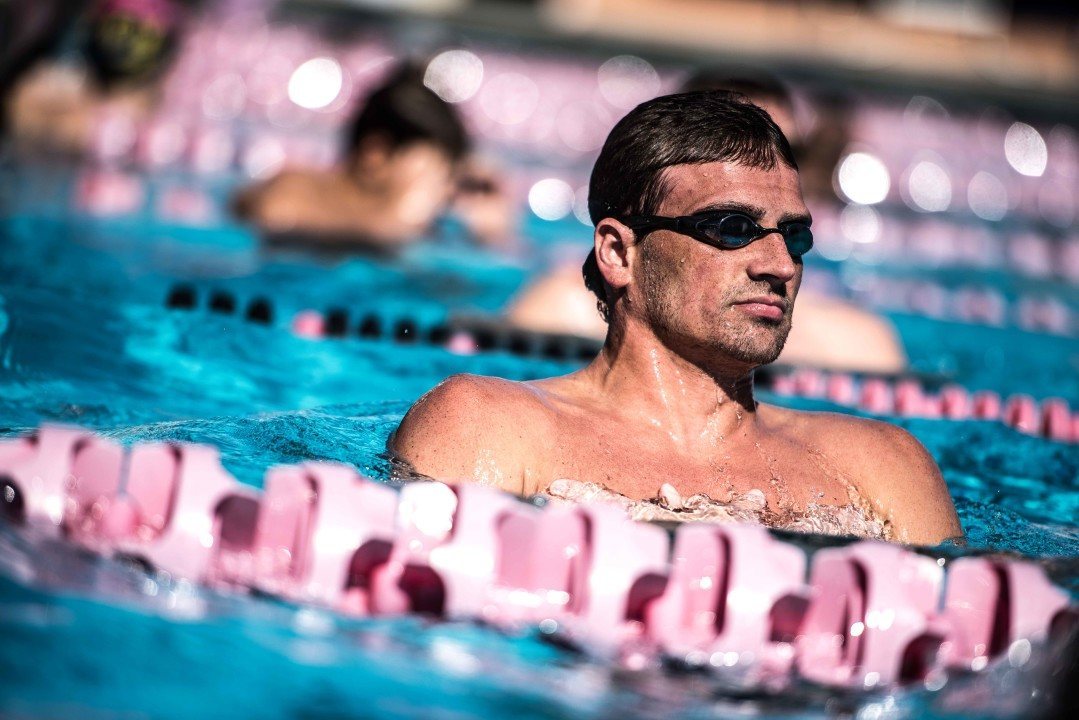 Get the info on Lochte's breaststroke, current perspective on training, and why he's 'bummed.' Archive photo via Mike Lewis/Ola Vista Photography

The 2016 Arena Pro Swim Series meet in Charlotte kicked off tonight with the distance swimmers taking to the Mecklenburg County Aquatic Center. With none of his 7 scheduled events on the evening’s agenda, Olympian and SwimMAC Elite team member Ryan Lochte spoke with the media on a variety of subjects, including what it’s like training under Team USA’s Olympic women’s coach, David Marsh.

Training-wise, Lochte and Marsh say that the former Gainesville, Florida resident has put in a solid 3 months in the pool, with Lochte halfway joking that he’s ‘ready for taper.’ Both coach and swimmer indicate that Lochte’s breaststroke is ‘looking better than ever’, a loaded statement given the 31-year-old is one of the most dynamic IMers in the world.

Lochte is slated to swim the 50m breaststroke in Charlotte, a non-Olympic event, but one that will put that element of his powerful 200m and 400m IM prowess on full display.

Both Lochte and Marsh will use performance data and outcomes from this meet to guide them in the determination of Lochte’s schedule come the U.S. Olympic Trials, now just 6 weeks away.

From an adimistrative perspective, when asked if Marsh was frustrated that other big swimming names such as Michael Phelps and Katie Ledecky opted to swim at the Atlanta Classic this same weekend instead of the Pro Swim, Marsh said ‘no’.

“I understand, Georgia Tech [site of the Atlanta Classic] is a great pool,” said Marsh. “But, we have Michigan, Indiana, Louisville all here ready to compete. In virtually every event there will be a potential Olympic medalist, from the U.S. or another country, competing here in Charlotte this weekend.”

For his part, Lochte, who sent Phelps a congratulatory text on the birth of the 22-time Olympic medalist’s son Boomer, said he’s “kind of bummed” that he won’t be competing against his long-time rival this weekend. “He’s one of the most challenging swimmers to face and compete against,” Lochte says about racing Phelps.

thoughts on the zika virus … “oh my god”