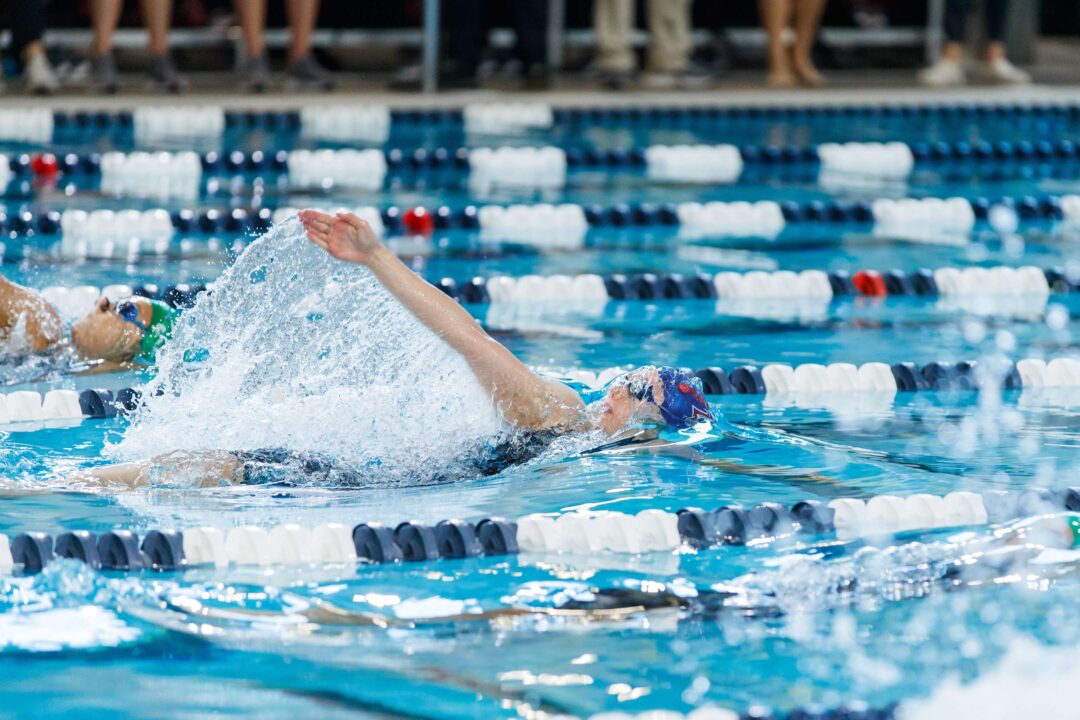 Four wins in five races blew the CCSA Women's Championships wide open for the Liberty Flames on Friday, while the Incarnate Word men extended their lead too. Archive photo via Liberty Athletics

The Liberty women put themselves into uncatchable territory on Friday night at the CCSA Swimming & Diving Championships, while the Incarnate Word men crept away from Florida Atlantic.

Last season, this meet ended in a tie between Florida Gulf Coast and Liberty. That is indicative of the league’s historic rivalry between the top two teams: competitive meets that still have some mystery headed into the final day of competition.

This year is not one of those years. The Flames entered the day with a 171.5 point lead, and four individual wins in five races stretched that into a 274.5 point lead heading into the final day of competition. All that’s left to be decided in the scoring c0lumn is whether the Flames can surpass FGCU’s 2016 margin of victory of 312 points as the biggest in league history.

To this point of the meet, Liberty had built their lead with depth, but those four wins on Friday was more than the three events they conquered in the first two meets of the day combined.

That included the team’s first relay win of the meet in the 800 free relay in 7:22.16. There, the group of Hannah Huenefeld, Eva Suggs, Emma Hazel, and Abby Stroeier combined to win by more than 4.5 seconds ahead of FGCU, including the three fastest legs of the entire field. Suggs was the only swimmer in the race sub-1:50, splitting 1:48.61 on a rolling start.

The next event was diving, where Maddie Freece bounced back from a third-place finish on 3-meter to defend her 1-meter title. The Flames went 1-2, with Lauren Chennault finishing 2nd, before Florida Gulf Coast’s Reese Wakefield placed 3rd.

Back in the lanes, Liberty sophomore transfer Abbie Shaw made it three-in-a-row with a 53.93 win in the 100 back. Shaw joined Liberty this season after originally committing to the Kentucky Wildcats. That time for shaw was within a tenth of her best time from mid-season.

While Shaw won fairly comfortably, there was a tight race for 2nd place. The runner-up ultimately came out as UNC Asheville’s Nora Segurola in 54.66, just .01 ahead of Incarnate Word’s Kristen Strasza in 45.67. Lucija Sulenta from FGCU was 3rd in 54.82 and Eva Suggs from Liberty was 5th in 54.89 after her big relay split.

Segurola’s time matches her UNCA school record, as the Bulldogs continue their historic season with tons of new school records this week.

Way to go Nora!!! Her time of 54.66 matches her own school record! #ALLinAVL #CCSAChamps pic.twitter.com/tbMLx3ClsS

FGCU snapped Liberty’s winning streak when two-time CSCAA All-American Petra Halmai won the 100 breast in 1:00.53. She finished just ahead of UNCA’s Mikaela Fullerton, who was 2nd in 1:00.55 (another school record).

Halmai’s win was her fourth straight CCSA title in the event, and 20th overall (including relays). She has 20 career CCSA medals, now in her 5th season of collegiate competition.

Halmai doesn’t yet have a time that would qualify her for the 2022 NCAA Championship, but her best race, the 200 breaststroke, comes on the final day of competition on Saturday.

What a finish! Even though Mikaela finished second, she still broke her own school record of 1:01.19 by clocking in at 1:00.55! #ALLinAVL #CCSAChamps pic.twitter.com/Hduz9wSHJ2

The Flames wrapped the day with yet another win, this time Chloe Harris in the 200 fly in 2:01.51. The sophomore had a best time entering the meet of 2:02.42 from high school, but dipped well under that on Saturday.

As the dust settled, UNC-Asheville was just 13.5 points behind FGCU for 2nd place. On paper, FGCU is better at the final day’s competition, but Asheville has been out-performing seed all week long, so that position isn’t a lock yet.

The Incarnate Word men came out on fire on Friday, winning the first three individual events of the meet.

Both of those relays included three freshmen.

Their next win came in the 100 back, where sophomore Fernando Ruvalcaba beat out the defending champion Brady Fields of Gardner-Webb for the win. Ruvalcaba touched in 47.66, followed by Fields in 2nd in 48.04.

Both times were new lifetime bests, and Ruvalcaba was more than a second ahead of Fields’ winning time from last year. He also came within .05 seconds of the CCSA Meet and Conference Record that was set by Connor Bros of Gardner-Webb in 2017.

Incarnate Word got their third and final win of the day in the 100 breaststroke, when freshman Spyros Kranias finished in 54.19. That put him more than 1.3 seconds ahead of FAU freshman Enrique Prats.

The two filled the void left by the graduation of the top two finishers from last year, which includes the Conference Swimmer of the Year Peter Durisin of Old Dominion, who won the event.

Jonathan Frye of Gardner-Webb placed 3rd for the 2nd-straight season.

Florida Atlantic’s Rateb Hussein broke the Incarnate Word stranglehold on the day by topping the 200 fly to end the session. He touched in 1:44.94, which is the best time at this meet since Reed Matthews’ conference record in 2016.

Hussein won the 100 fly earlier in the meet, and will finish his week individually with the 100 free on Saturday.