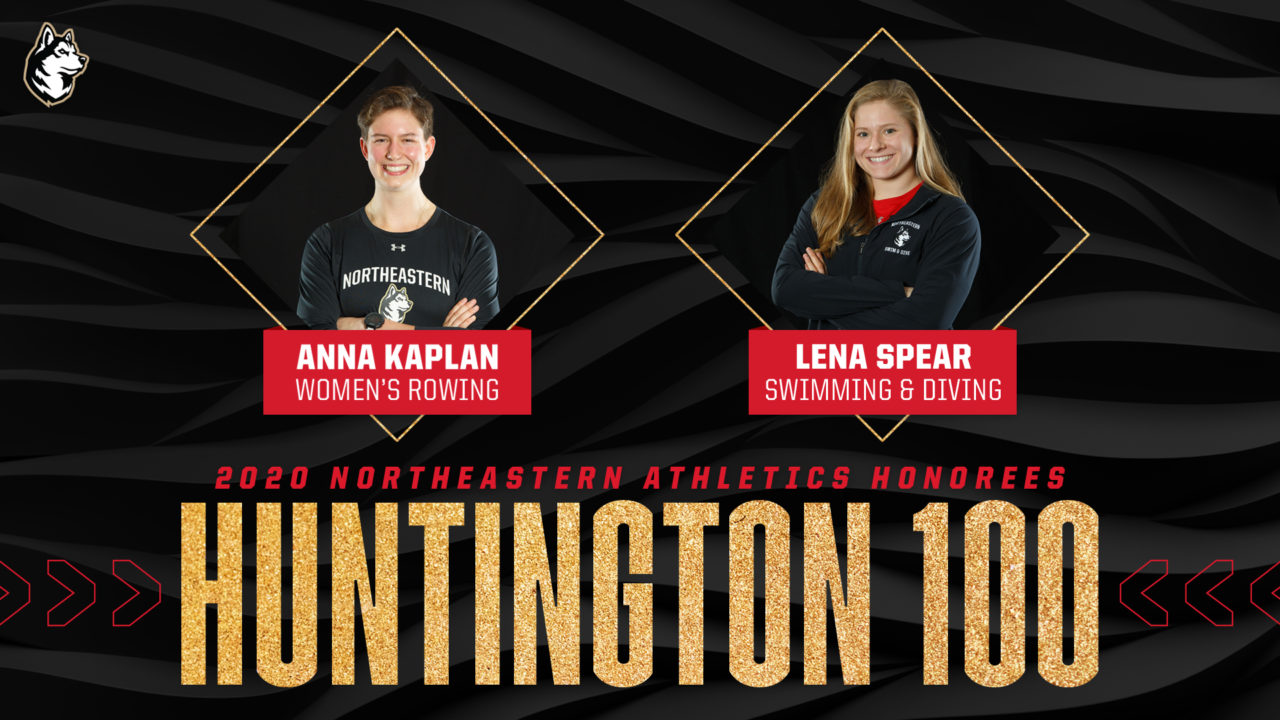 Northeastern's Lena Spear was selected as one of the university's Huntington 100, recognizing students for work in the classroom and in the community. Current photo via Northeastern Athletics

BOSTON— Northeastern student-athletes Anna Kaplan of women’s rowing and Lena Spear of women’s swimming were selected as two of the university’s prestigious Huntington 100, an honor that recognizes outstanding undergraduate and graduate students for their achievements in the classroom and in the community.

Nearly 750 nominations were received this year as faculty, staff and peers at Northeastern submitted their nominations for the honor. From that pool, the top 100 candidates were identified and rewarded with selection to the Huntington 100.

Sponsored by the Office of Student Life, the Huntington 100 honors outstanding students for achievements which are commensurate with the university’s mission, ideals, values, and Academic Plan. These students represent what Northeastern is today – a selective institution with rigorous academic programs and a sharp focus on the global experience.

Each cohort of students is an incredible testament to the high ambition and achievement found in the Northeastern student body. Recipients are chosen for their:
• Impact on the campus community
• Record of service, be it within the university or another community
• Global engagement, in the form of international co-op, study abroad, or other experiential learning outside the United States
• Demonstrated leadership
• Entrepreneurial or innovative spirit
• Commitment to a high level of ideals and ability to positively represent the values of Northeastern

Spear earned a perfect 4.0 GPA as a Health Science major. The Chicago, Illinois native has been on the Dean’s List every semester at NU and has also earned ‘Top Dog’ status (3.8 GPA or higher every semester on Huntington Avenue. In the pool, Spear was a three-time competitor in the CAA Championships and was a member of the 200 freestyle relay team that holds the Northeastern record.

Kaplan boasts a 3.84 GPA as an Electrical Engineering major. The Millersville, Maryland native was a captain for the 2019-20 campaign and a two-time CRCA national scholar-athlete. On the water, Kaplan helped the Huskies bring home a ninth straight CAA Championship and sixth consecutive berth into the NCAA championship regatta.