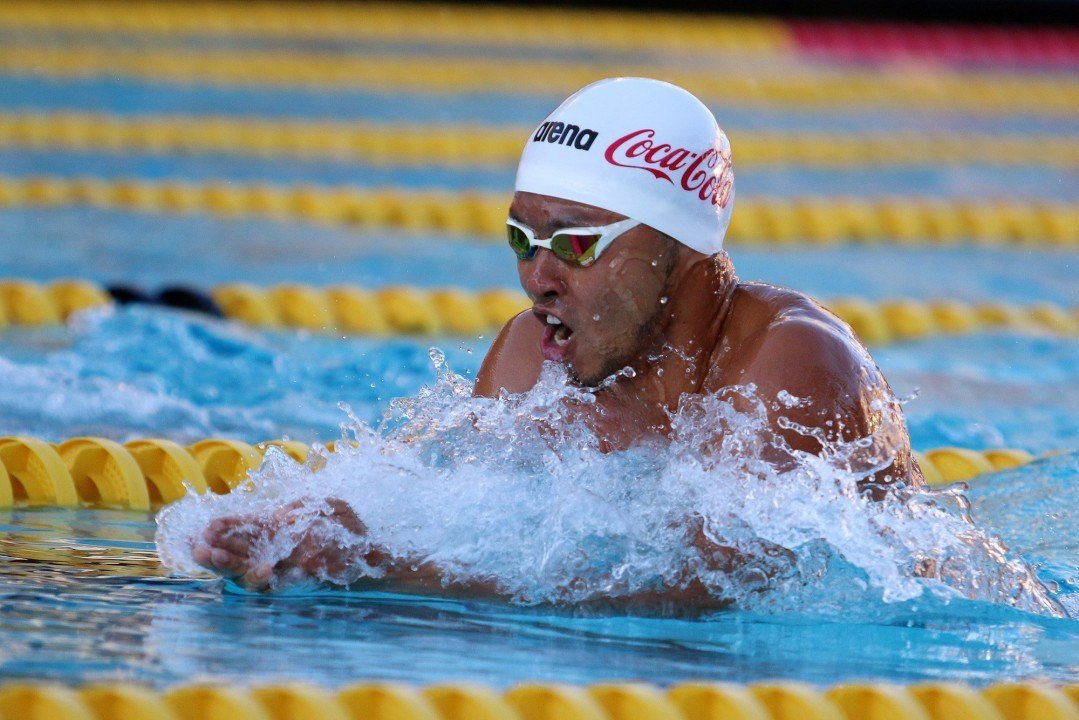 33-year-old Kosuke Kitajima dips under a minute in the 100m breaststroke for the first time in almost 2 years. Archive photo via Photo courtesy of Richard Quinton.

In a somewhat surprising turn of events during the first evening session of the Japanese Olympic Trials, breaststroking legend Kosuke Kitajima led the semi-final field, scoring a time of 59.62 to slide under the Japanese Olympic standard of 59.63 by just .01 of a second.

Kitajima ranked as the only sub-minute swimmer of the evening’s field and his effort now positions him as the 4th-fastest man in the world this season with a finals swim yet to go.

Of his swim tonight in Tokyo, Kitajima said, “I wanted a slightly quicker time, but it’s been a while since I swam 59-something. I feel this is a reward for all the hard work I’ve put in. I’d still like to set a personal best again in the final.” A personal best for this beastly legend would be in the range of 58.90, the current Japanese National Record he set at trials way back in 2012.

Assuming Kitajima’s time in tonight’s meet is enough to position him on the roster for Rio, the 33-year-old would be embarking on his 5th Olympic adventure, having already made history across the 2000 Sydney, 2004 Athens, 2008 Beijing and 2012 London Olmpic Games. Coming in 4th in the 100m breaststroke in Sydney, Kitajima struck back about 2 years later, when, in October of 2002, he set a new World Record in the 200m breaststroke event.

Having scored a relay-only spot on Japan’s World Championships team in 2015 paired with the fact that his previous season bests from 2014 and 2015 were 1:00.58 and 1:00.18, respectively, Kitajima certainly turned some heads when he topped the field tonight. A field which included young gun Yasuhiro Koseki, who owned Japan’s fastest time entering the meet with his 59.67 from earlier this year.

Finals of the men’s 100m breaststroke in Tokyo will be contested tomorrow night, April 5th, where we’ll see if Kitajima’s 33-year-old body can keep its momentum going.

Amazing to see him at that level. I believed he was retired. 🙂
Really a legend of swimming.

BOBO – you weren’t the only one who thought Kitajima was retired – check out this witty blog post from October 2015 by Cdn swimmer Kierra Smith … “wrongly thought he was retired” and it “would be easy to mistake him for a typical middle of the pack masters swimmer who you could rely on to know where to find the best post workout breakfast place was in any town” Link https://kierrasmith.wordpress.com/author/kierrasmith/ Full Quote “Kosuke Kitajima won Olympic gold in the 200m breaststroke at the Athens Olympics in 2004 and followed it up with another gold medal at the Beijing Olympics in 2008. He was unsuccessful at his attempt at a three-peat in London finishing just out of the medals.… Read more »