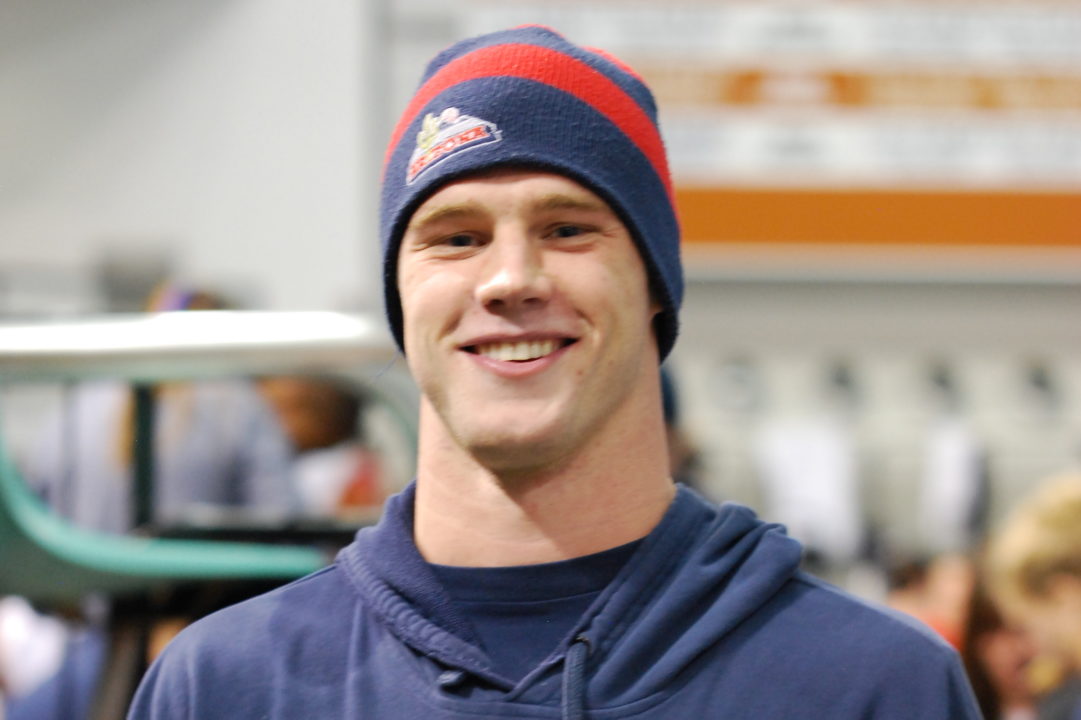 Kevin Cordes is the fastest man ever in the 200 meter breaststroke on American soil. Current photo via Tim Binning/TheSwimPictures.com

That cleared the old Meet Record of 2:08.01 done by Eric Shanteau in 2009. That Shanteau swim was also the U.S. Open Record – which is to say, the fastest time ever done on American soil.

Cordes has accomplished just about everything there is to accomplish in the yards pool even with a year of NCAA eligibility left, and while he was the United States’ best long course breaststroker last year, he still had growth to compete for medals on the world’s stage. He’s now made that growth, and currently sits 3rd in the world behind Brits Ross Murdoch and Michael Jamieson.

Cordes’ personal previous best was a 2:08.34 at Nationals last year. The target in finals for the American Record is Shanteau’s 2:07.42.

The splits reveal that the two swim with very similar pacing, though on Shanteau’s American Record, aided by the polyurethane suit and its fatigue-fighting powers, the closing 50 was amazing.

Frankly, what history has indicated is that a 1:34.5 is about what you can do in the first 150 of a two minute and seven second 200 breaststroke. There seems to be a soft ceiling in play there. The difference comes on the tail-end, where the Shanteau’s, Akihiro Yamaguchi’s, and Daniel Gyurta’s of the world are able to hang on for one more sub-33 second split.

this kid is a legend

He’s very talented but how can you call him “a legend” while he has still not won any international gold medal? 🙄
He’s a legend in USA in yards. Ok. But there’s still much work to do internationally in long course.

You have to have worldwide renown to be considered a legend? I didn’t realize there were rules about these sort of things… 🙂

If not having any international gold is enough to be a legend.. what we should call Kitajima? Deity? I think to be considered a legend in any sport you have to beat the current best at their own game.. and cordes has yet to do that.. I don´t think it is okay to put Cordes on the same level of Real us swimming legends like Biondi and Peirsol and a known swimswam writer..

That’s what I said.
He’s probably a legend in American swimming because he has done amazing things in yards.
But to call him a swimming legend overall, he will have to win some world and olympic gold medals and break some world records. It seems obvious.
Kitajima is a breaststroke legend.
Aaron Peirsol is a backstroke legend.
Why Katie Ledecky is already a legend?
Why Mark Spitz is a legend?
Why Ian Thorpe is a legend?
Why Michael Phelps is the legend of the legends?

But perhaps we don’t have the same meaning of the word “legend”. It’s possible. 🙂

But since Bieber is called by some people a “legend” of music, then, yes, anything is possible about the meaning of the word “legend”.