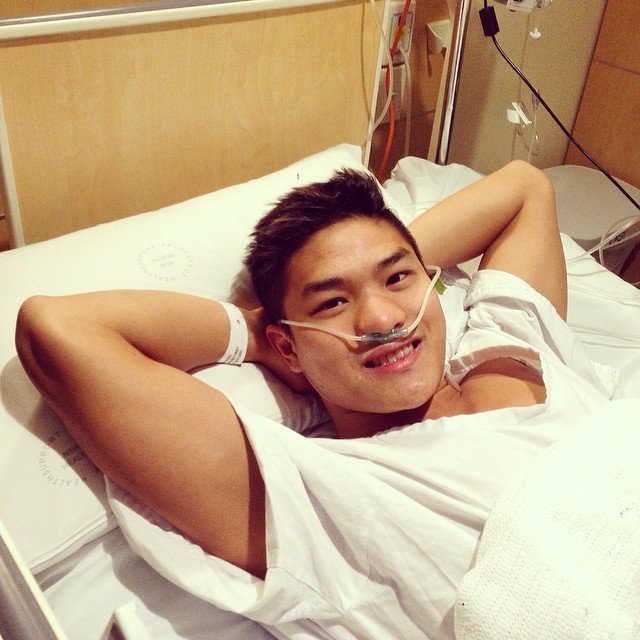 Australian National Team swimmer Kenneth To underwent a successful back surgery last night at the Westmead Private Hospital. Current photo via Kenneth To

Australian National Team swimmer Kenneth To successfully underwent back surgery overnight, and has begun his recovery.

The surgery came on a short turnaround after announcing just a week ago that he would be pulling out of the 2014 Pan Pac Championships to deal with back pain that has been plaguing him for a while.

Specifically, To had an L4-L5 disc herniation, and the surgery was a microdiscectomy. The L4 and L5 verebrae are in the lower back, just above the level of the buttocks. A herniation means that one of the disks between vertebrae has ruptured, with the soft interior pushing out through the tougher exterior of the disk. This can result in greater friction between vertebrae, causing significant pain, numbness, and/or weakness in arms and legs.

According to Spine-Health.com, a microdiscectomy involves alleviating impingement on the nerve root. The good news about this surgery is that it involves minimal impact on the surrounding joints, ligaments, and muscles. While some surgeons recommend limited bending, lifting, or twisting after the surgery, the back is “mechanically the same,” so the recovery can be fairly easy and successful.

To has already ruled himself out of the 2014 short course season, meaning that he will miss the Short Course World Championships in Qatar in December, as well as the FINA World Cup Series in the lead-up to that meet.

The 2014 Pan Pacs, with the remaining 40 Australian swimmers, start Thursday morning in Australia – less than 12 hours from now.

Kenneth To is himself a physiotherapist so he should be able to do his own therapy saving quite some money. Handy.